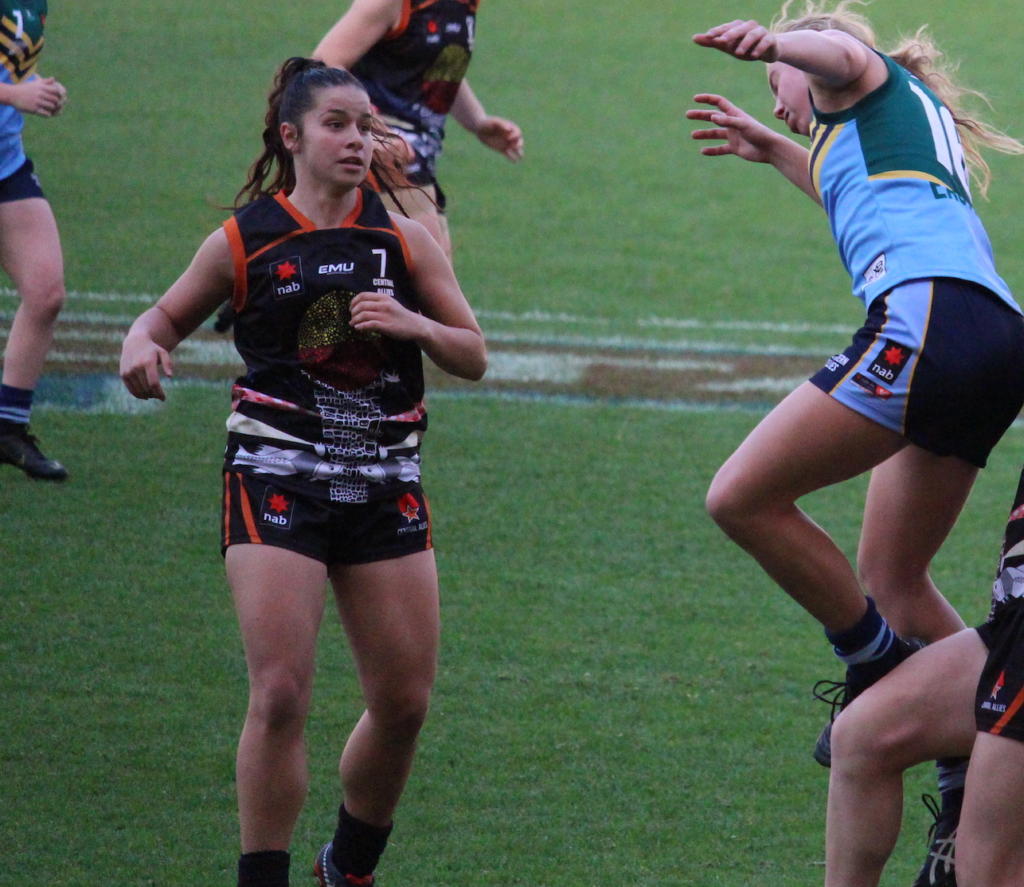 IN the first game back after the Christmas break there was plenty on the line ,with prime ladder position and reputation all up for grabs. Round 12 of the Northern Territory Football League Women’s (NTFLW) was filled with close games and a few blowouts with the biggest surprise Waratah’s loss to the sixth placed Nightcliff. Meanwhile, Big River Hawks forfeited their game against Tracy Village and the Wanderers prevailed in a tight encounter.

The round kicked off on Friday night with only 20 points separating both sides at the final siren. Unfortunately for the Buffettes the damage was all but done in the first quarter, with the Magpies going on a scoring spree to open up a 27-point lead. The Buffettes failed to register a score in the first quarter thanks to the intense defensive pressure applied by the Magpies, while the Pies continued to hit the scoreboard with every opportunity that came their way. With a handy lead they were hard to catch, forcing the Buffettes to play catch-up – a game style they simply could not maintain. Freda Puruntatameri was electric in front of goals nailing three majors to help establish a nice buffer for her side while Arthurina Moreen also contributed to the scoresheet with two goals of her own in the Magpies victory. Natasha Medbury also found the big sticks along with plenty of ball across the field while teammate Kaeleisha White made no mistake fighting hard to win the footy and dispose of it cleanly. For the Buffettes, youngster Tayla Hart-Aluni kept her hot form running with another strong showing, nailing a goal and proving she is not afraid to get in on the action. Although Dominique Carbone did not find the goals like the previous round she still found plenty of the ball, instead helping to set up plays across the ground while Lucy Adam and Meredith Turner hit the scoreboard instead.

It came down to a mere three points with St Mary’s falling just short of their sixth win for the season. St Mary’s will be rueing both their inaccuracy and lacklustre second quarter, allowing the Wanderers to pile on four goals to their one. It was close throughout the match with St Mary’s ultimately forced into chase position early on after a disappointing second term. However, the Saints were not going to die wondering, mounting a strong comeback and eventually going down by just the three points. Both sides fought hard to gain ascendancy and most importantly capitalise on their scoring opportunities but it was the Wanderers’ increased accuracy in front of the big sticks that got them over the line. Lucille Motlop was the danger woman for the Wanderers, booting two goals, while Tishara Davern also added another two majors to the total. Both Pierre-Angelique Koulakis and Shekeine De Satge also made their presence felt with one goal apiece to cap off a tight but successful outing for the Wanderers. Aaliyah Bailey was solid as ever, plying her trade across the field and getting involved in the action to keep her side in the contest while Chinette Suapero continued her consistent form for St Mary’s, but it was not enough to give them the boost they needed to clinch the win.

It was another dominant performance from Southern Districts to limit Pint to only 10 points, proving that the Christmas break did no harm to their game play and intensity. The Crocs were on from the first whistle of the game, coming out with a point to prove and scoring prowess to boot but suffered from inaccuracy registering 12 behinds. Although they ran out with a 56 point victory they really could have romped it home if it was not for the missed chances in front of goal, something they will want to tidy up with finals fast approaching. Pint scored their only goal in the final term of the game thanks to the hard work and strong defensive structure of Southern Districts. Goal scoring machine Ebony Miller added to her growing tally booting another four majors in the clash with five other teammates hitting the scoreboard. Grace Mulvahill was clean across the ground using her spatial awareness to have an impact while also showing her goal sense to bag a goal herself. Mattea Breed was a key contributor once again in the win, using her ball smarts and vision to have an impact while Keeley Waterbury left her mark both on the scoresheet and on stats sheet. Emma Greaves and Cara Evans worked tirelessly to try and create some type of forward thrust for Pint but it was often to no avail.

Nightcliff pulled off one of the biggest shocks of the round, downing the first placed Waratah in convincing fashion. This is only the second loss of the season for Waratah who struggled to find their normal momentum and scoring prowess, making for an enthralling battle between the two sides. Nightcliff took an early lead and did not look back, steadily building on their lead and proving that their best can match it with anyone in the competition. They all but doubled their opponents’ score by the final siren, showcasing their ability to close out games and score at a steady pace albeit with slight inaccuracy. The margin really started to open up in the third quarter before Waratah fought back but ultimately could not do enough to reduce the margin significantly. In her first game of the season Timaya Cunningham was a shining light for the ‘Tahs, nailing her side’s only two goals and showcasing her talent. Isabella Rapson-Staropoli continued her hot form, named in the bests for the third consecutive week and highlighting her ball winning ability and skill. For Nightcliff, Mikayla Ward was up to her usual tricks in front of goal nailing two majors and causing headaches for her defensive opposition. Eliza Morrison made an impact on the scoreboard with a goal while also doing her fair share of damage across the ground alongside Emma-Lou Wolsey and Sophie Hatzismalis.