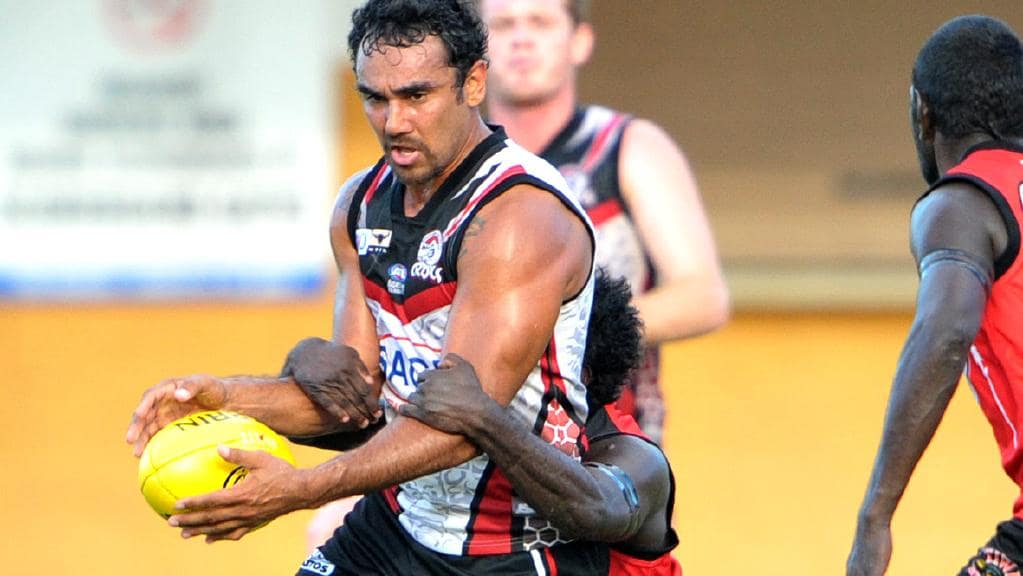 FOOTBALL is back in 2020 as the Northern Territory Football League (NTFL) Men’s Premier League season resumes under Friday night lights ahead of a huge triple-header on Saturday. In the game of the round, Darwin and Southern Districts play off in an eight-pointer while the remaining top five sides meet opponents further off the pace.

St Mary’s will be looking to extend its three-game winning run into the new year when it faces Wanderers to open Round 12 under Friday night lights. The Saints did not dwell on a second loss to Tiwi in Round 8, bouncing back to claim three wins on the trot and go clear in second heading into the mid-season break. While St Mary’s’ form has been consistent, Wanderers’ path has been less linear as the young side battles to regain its early-season form. The Eagles are set for a big boost as Gold Coast SUNS trainee Joel Jeffrey looks primed to return to the lineup, and he may be used up both ends as Victorian twin towers Jackson Paine and Jackson Calder have been named inside forward 50 for the Saints. The AFL experience of recent weeks is not quite as prominent for St Mary’s, but Jake Long is set to feature alongside potential 2020 Richmond father-son, Maurice Rioli Jnr. Opportunities will be limited for Wanderers as it pushes to reclaim a top five spot, and the Saints should pose a tough test as one of the genuine premiership contenders. Expect St Mary’s experience to come into play as the four quarters wear on.

Arguably the game of the round opens a huge Saturday triple-header at TIO Stadium, with Darwin and Southern Districts battling it out for top five supremacy. The Buffs have only defeated one of the current top five sides – Tiwi, all the way back in Round 1 – and come in having gone down to two of them right before the break. The Crocs fared slightly better in the build up to 2020, albeit having gone down comfortably to Nightcliff, but should take confidence in having already beaten the Buffaloes in Round 5. Both sides come in well stacked, with Southern Districts naming the likes of Michael Barlow, Ed Barlow, Jeff Garlett, and Richard Tambling, not to mention a forward line boasting the competition’s leading goalkicker in Will Farrer. Matt Campbell will lead his side in response, with the prolific Adam Sambono poised to return, Brodie Foster another likely inclusion, and Joe Anderson set to feature up forward alongside Daniel Stafford. While the Crocs’ side jumps off the page and their form has been telling at times, Darwin can beat anyone at its absolute best. The Buffs will need to bring exactly that if they are to stay in the top two hunt.

League leaders Nightcliff will aim to pick up where it left off in 2019, with bottom three opponent Waratah first on the agenda in the new year. The Tigers have been near-perfect in their premiership defence thus far, only going down to the second-ranked side and beating every other opponent through 11 rounds. While they will be looking for more of the same, a change of fortunes will be what Waratah is after as it looks to latch onto the heels of the top five. There has been a sizeable gap between the Warriors’ best and worse, with the absence of key players proving telling – and it could well be the case in this game. With Abe Ankers and Brodie Carroll not named in the squad, spearhead Kim Kantilla looks set for some added midfield time having been named as ruck rover. There should be no such issues for the versatile and deep Nightcliff side, with most of the key Tigers players set to feature. Trent Melville will look to push into top spot in the goalkicking charts on the back of a potential percentage booster, while Kaine Riley is one of many who will hope to continue their great form. The Tigers are always formidable, and will prove another tough ask for the Warriors in this fixture.

Palmerston’s new year resolutions will be clear heading into its first match of 2020, with the Tiwi Bombers first on the agenda in Round 12’s final fixture. While they have gone close a couple of times, the Magpies have mostly been well off the pace this season and sit bottom of the league as the only side yet to crack a win. Meanwhile, the Bombers have flown up into the top five after an indifferent start to their campaign, maintaining a positive record and now looking to extend the gap to sixth. This matchup could provide a great opportunity to do so given Wanderers and Waratah’s difficult assignments, but Palmerston’s lineup suggests it will be up for the fight. Alwyn Davey will lead his side on-field alongside brother, Aaron and son, Alwyn Jnr, while Kyle Emery and Misha Perry Jnr will also look to make an impact going forward. Tiwi’s side is stacked as usual, featuring the AFL experience of Tom Bell, Nathan Djerrkura, and Ashton Hams to go with their formidable list of usual suspects. While it looks a mismatch on paper, anything can happen after the break and the Magpies will be hungry to rectify a disappointing 2019.