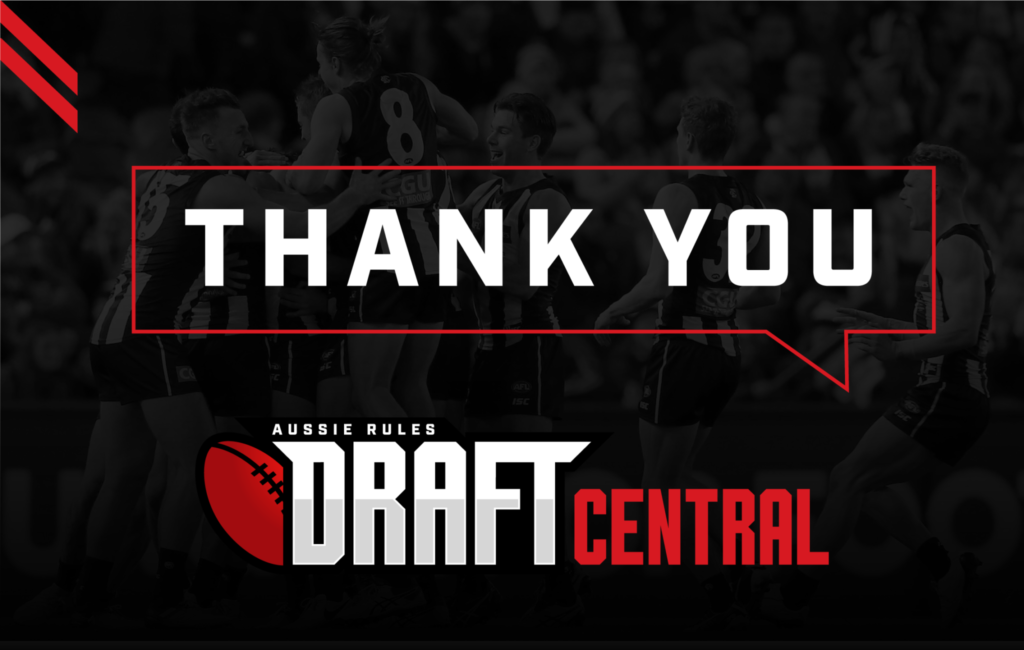 AFTER completing our seventh year, Aussie Rules Draft Central stepped up to another level in 2019. The team here at Draft Central have worked exceptionally hard throughout the year to produce high quality content and cover a range of leagues across the country and we would like to thank everyone for showing their support this year.

We increased our coverage in the newly-named NAB League, as well as providing coverage of the South Australian National Football League (SANFL) and West Australian Football League (WAFL) Colts. Midyear, we covered the Under-18 Championships and Under-16 Championships. The number one AFL Draft site peaked in November 2019 with a 30 per cent increase of visitors from the previous year, as our team of writers expanded across the nation and produced more than 200 draft profiles made accessible to the public. Throughout the 2019 AFL Draft, we held a live draft chat for anyone to interact with our team through Facebook, while also producing our first podcast, The Final Siren, which had almost 70 episodes this year.

For the second consecutive year, we produced an AFL Draft Guide, with more content and profiles, including a review of the AFL Women’s Draft for the first time. In the female football space, we interviewed more than 100 aspiring footballers throughout the year, with attendance at the NAB League Pre-Season Testing Day, AFL Women’s Under-18 Championships and NAB League Girls in 2019. Draft Central also increased its coverage across the nation with weekly reviews and previews for the SANFL Women’s competition, as well as the Victorian Football League (VFL) Women’s.

Looking ahead to 2020, there is plenty to be excited about from an AFL Draft space, as well as the footballing landscape. We will continue our coverage of the Under 18s competitions, with a greater focus on those in South Australia and Western Australia, as well as covering the state leagues in more detail. From a female football perspective, we will be covering the AFL Women’s once again, and go more in-depth with the SANFL Women’s and VFL Women’s competitions this year.

We have plenty of exciting initiatives and changes coming up in 2020, with some new site features and plenty of regular content, get excited for Draft Central to go to another level again.