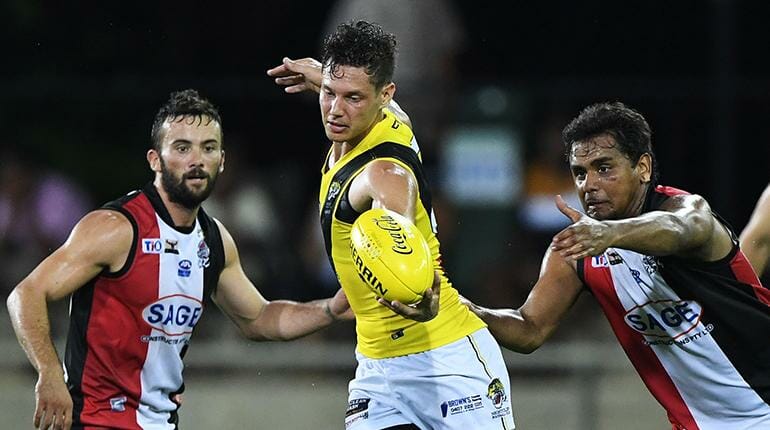 A TOP of the table clash headlines a big weekend of Northern Territory Football League (NTFL) Men’s Premier League action, with Southern Districts looking to close the gap on Nightcliff. St Mary’s and Darwin could benefit from the result of that game and jump into second with wins, while Tiwi will hope to continue its push for finals as Wanderers trail closely.

A fixture with implications on both sides’ finals hopes takes place as Tiwi Bombers host Darwin Buffaloes at Tiwi Oval on Saturday afternoon. The Bombers have thrown themselves into the mix and are in good form of late, going down by just six points to Nightcliff last time out but managing to hold on to fifth place. On the other hand, Darwin snatched a close win over Palmerston in Round 9 to put them up into third on the back of three consecutive victories. With Tiwi hoping to hang onto its top five spot and Darwin looking to break into the top two, there is plenty on the line either way.

The Bombers come in once again with a great lineup on paper, with the likes of Adam Tipungwuti, Brayden Rioli, and Ross Tungatalum resigned to the bench, but they look like being without ex-Cat Nathan Djerrkura for this clash in a blow to their midfield stocks, with Ashton Hams perhaps one to cover. The Buffs have bolstered their line-up with the signing of Ryan Pendlebury, the brother of Scott and an ex-VFL Team of the Year member. He should add value in the back half, adding to the experience of Cameron Stokes and Chris Williams further afield as Matt Campbell and Joe Anderson come out of the side.

While Darwin’s three wins on the trot and ladder position puts them in the category of favourite, Tiwi looks to be in slightly better form going off last week’s effort and should pose plenty of questions to the Buffs defence. It looms as a battle of the Bombers’ speed against some of the Buffs’ strength.

St Mary’s will look to compound the misery of a bottom three side for the second straight week when it takes on Palmerston in the first game of a TIO Stadium double-header. The Saints have slipped to fourth, but could climb as high as second with results pending and will look to put their best foot forward with a top of the table clash following theirs. Given how St Mary’s handled Waratah last week, the winless Magpies could be in for another long day. But Palmerston’s form last week exceeded its current record, and a couple of close losses would have the Magpies eager to prove their worth.

Alwyn Davey Jnr joins his father in the Palmerston side, with Senior set to line up in midfield under Ezekiel Frank while Adam Diamond shifts to the forward half. They will have their work cut out for them, with the Saints naming David Armitage, Shaun Edwards, and Jackson Paine in midfield, while Jackson Calder is set to team up with the returning Jarrad Waite up forward. It all but guarantees plenty of goals, and plenty of excitement at the least.

On paper, it seems this clash could get ugly given the experience and firepower of the Saints, but do not discount the effort of Palmerston on its better days. Fans can look forward to seeing a heap of ex-AFL players either way, with a few favourite sons taking the field for both teams.

The game of the round earns a prime time slot on Saturday night as Southern Districts look to get one back on Nightcliff and tighten the minor premiership race. The Crocs started their season with a loss to last season’s grand final foes, but have since steadied the ship and sit six points adrift in second. Such has been Nightcliff’s dominance, the Southern Districts is only one of a couple of sides to have truly challenged the reigning premiers, and will look to go a step further this time around. And with both sides coming in off consecutive wins, it seems an ideal time to do battle.

A couple of very handy ex-AFL players come into the Crocs side, with Jeff Garlett and Jared Brennan named. Garlett should team up nicely with the likes of Will Farrer and Beau Schwarze up forward, while Brennan may slot in up the other end in a key position post. There are no ex-AFL inclusions for the Tigers, who will be without Willie Wheeler, but a forward 50 featuring his ex-Williamstown teammate Leigh Masters alongside Trent Melville and Liam Holt-Fitz has been working a treat. Add the impact of John Butcher, Kaine Riley, and Cam Ilett across the ground, and you have a settled lineup ready for any challenge.

The Tigers will need to be at their best to quell the Crocs, which are snapping at their heels, but should have great confidence having aced all but one test put to them this year. Southern Districts will be hungry for a win with dual-meaning, getting one back while keeping touch at the top.

Wanderers will hope to re-enter the finals fold when it clashes with fellow bottom three side, Waratah in Sunday’s lone fixture. Both sides come in off disappointing losses, with Waratah’s 123-point thumping at the hands of St Mary’s a clear lowlight for the season. Wanderers has strayed after a promising start, looking to rectify a run of three-straight losses. With both teams somewhat underperforming at this stage and the mid-season break coming up, expect them to throw everything at getting a result here.

Abe Ankers is a very welcome addition to the Warriors side which looks like heading in without Brodie Carroll, while Michael Newton is set to resume a dangerous forward trio with Kim Kantilla and Henry Kerinaiua at the fall of his aerial contests. Joel Jeffrey is a big out for Wanderers as he takes up training with the Gold Coast Suns, but the Muk Muks still boast dangerous youngsters in the form of Mark White, Beau O’Connell and Ronald Fejo, with all three able to play across every line.

There looks to be a good amount of talent spread across both sides, with plenty of excitement in either attacking 50. Expect some neat highlights and a competitive game between two teams looking to do better than their ladder position would suggest.