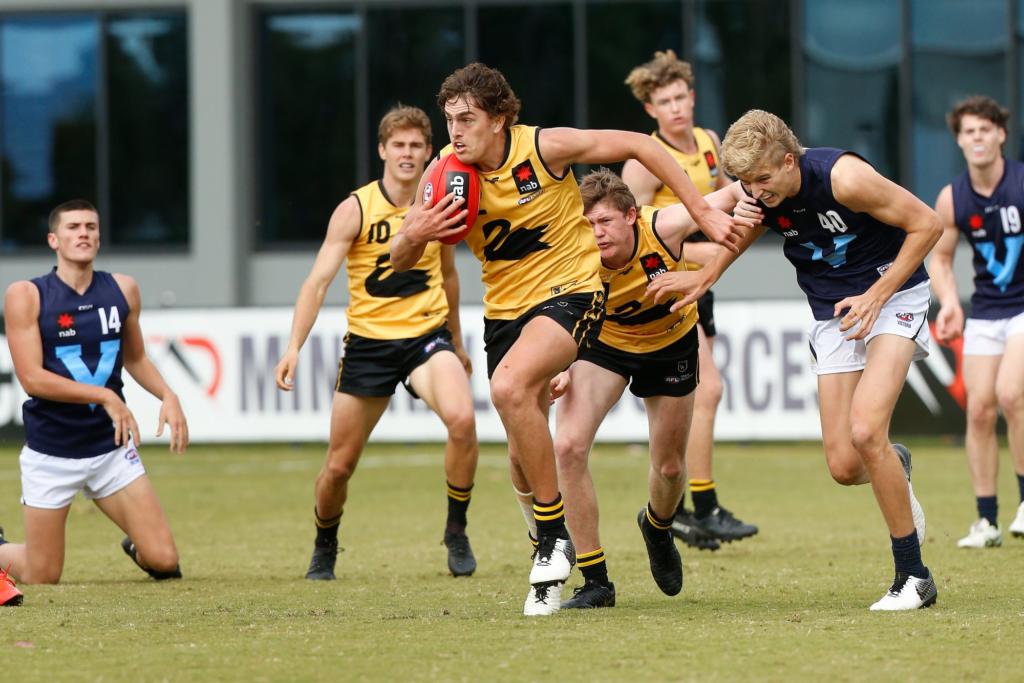 ONE of the most talked about clubs heading into the 2019 AFL National Draft, the Demons looked set to shake up the first round with two top 10 picks at the conclusion of what could only be described as a horror season for the 2018 preliminary finalists. Needing some firepower up forward, in particular a key forward and a small pressure forward, as well as some outside midfield depth, Melbourne would only end up using three selections, and traded back from Pick 8 to Pick 10 – which would become Pick 12 – to select a first round bolter. They then proceeded to select a slider which balanced the proceedings on most draft boards, and Demons fans can come away knowing that there are some strong foundations for the future with the draft haul.

Melbourne had what was effectively the first “live” selection in the AFL National Draft last Wednesday night, after Gold Coast SUNS made no secret that Oakleigh Chargers duo Matt Rowell and Noah Anderson were the first two selections. Demons fans tended to lean towards Hayden Young or Lachlan Ash with the need for skill coming off half-back, but recruiting guru Jason Taylor had other ideas. Many might have baulked at the idea of the Demons selecting the crop’s best ruck in Luke Jackson with the third selection, especially given for all of Melbourne’s shortcomings on-field, the dominance of Max Gawn is not one of them. But instead, Taylor picked the high upside East Fremantle talent with the belief that he could be the next Brodie Grundy, and in the meantime, hone his craft as a key forward. Jackson’s mobility is much greater than that of Gawn of Braydon Preuss, and would allow the teenager to play alongside one of them more effectively than if that duo were together. Simon Goodwin also hinted during the week that perhaps Jackson could develop into a new-age midfielder, and while it would be partially tongue-in-cheek, the West Australian’s mobility is one of his greatest strengths.

A month out from the draft, the lightning fast, aggressive tackling machine in Kysaiah ‘Kossie’ Pickett was predominantly ranked around the mid-second round. But like Cody Weightman and Miles Bergman after him, the small forward bolted into the first round and became the first of the trio selected in the end. Standing at just 171cm and 71kg, Pickett is not afraid of the contest and loves crashing into opponents and bringing them to ground. Along with his defensive pressure, Pickett has all the traits to be a highlight reel machine, flying for big grabs and snapping unbelievable goals. The only downside is his size which will limit midfield development, but there is nothing stopping him playing a similar role to Eddie Betts, while Pickett’s uncle Byron was made for the biggest stages. While he might have been considered a bolter, the Demons levelled it out with Trent Rivers at Pick 32 with the West Australian a slider in the draft. He joined his Sharks’ teammate Jackson at the Dees, and could play off half-back or along a wing wherever they see fit. Rivers also has the size and hands to play on the inside, making him the ultimate utility. Given he could well be a first round talent, Melbourne picked up a bargain in the mid second round.

The Demons had two picks in the AFL Rookie Draft and passed both, meaning they will have two spots to potentially hand to players over the off-season depending on how they train at the club. They could also hold onto a list spot for the mid-season draft and wait and see which players have started 2020 in good form before offering a list spot to them. While the Demons might have picked up a ruck, Jackson is more than capable of playing a forward role if required, and given the lack of pure key forwards in the draft, he would be one of the more desirable ones in that area. Pickett and Rivers are perfect needs, and Melbourne fans could expect Rivers to potentially play games next year, as could Jackson, while Pickett might feature later in the year, especially to give fans a taste of what he is capable of.