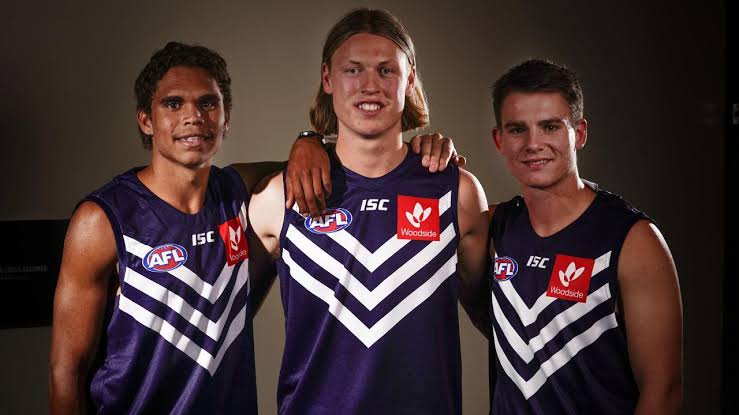 FREMANTLE has berthed a new generation with its haul in the 2019 AFL Draft, adding a high-quality crop of youngsters to a list fronted by dual Brownlow medallist, Nat Fyfe. Claiming a rare three consecutive top 10 picks, the Dockers were diverse in their selections; packaging two incredible Vic Country talents and one from their own Academy with picks seven, eight, and nine. The Academy theme continued through a couple of Category B rookie pick-ups, with some exciting outside talent also joining re-listed youngsters at the club.

Fremantle kicked off a busy first night of drafting by bringing in two NAB Leaguers who could arguably have been considered the third and fourth best talents in the nation, packaging the best kick in the draft in Hayden Young, with nuggety ball winner Caleb Serong – both of whom starred for Vic Country this year. Young is a defender with enormous upside, able to both intercept and rebound from the back while also having the size and athletic traits to push for a midfield move. Serong is a different type, smaller but more aggressive at the contest and one who will have no troubles adapting to the competitive AFL environment. A fearless leader with great class, Serong is more likely to begin his career at the next level as a forward given his size and ability to find the goals.

Speaking of finding the goals, Academy jet Liam Henry was the third prospect to land at the Dockers, with Fremantle hardly baulking at Carlton’s early bid on the midfielder/forward. A different type altogether to his top 10 counterparts, Henry is set to provide great long-term cover for the losses of Brad Hill and Ed Langdon with his driving speed on the outside and forward creativity. The exciting types were in favour throughout the Dockers’ haul, with Michael Frederick a surprise selection at pick 61 to round out their National Draft, while Category B rookies Isaiah Butters and Leno Thomas are developing smalls who can make a difference up either end. Jarvis Pina was the other new face brought in through the Rookie Draft, able to rotate off each line as another small option – but with a touch more polish as an overager this year. The re-listings of Thomas North and Hugh Dixon rounded out a busy few days, with Fremantle one of the few clubs to bring in well over a handful of prospects in an open draft.

This draft haul may be one Dockers fans look back on as a real difference-maker, with a range of talent brought in and a couple of elite movers heading West. Fremantle may well begin a transition towards becoming an more attractive team to watch with this group of players too given the amount of smalls and running types chosen, and recently appointed head coach John Longmuir has plenty to work with, with little go-home factor across the board.