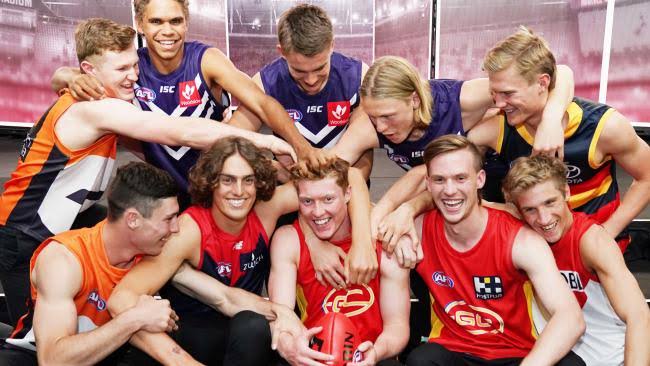 IF the first round of the 2019 National AFL Draft is anything to go by, then the remainder of the draft today will be full of surprises. A number of bolters made their way into the top 20, with Port Adelaide picking up Subiaco tall Mitch Georgiades with Pick 18 ahead of a number of other talls who had been touted highly, before Carlton picked up Sam Philp, an electrifying speedster from Northern Knights. Both were expected to land somewhere in the 20s but clubs pounced early.

Sydney pulled the first surprise of the night with Dylan Stephens heading to Sydney – a move that Draft Central‘s Ed Pascoe predicted – with the remainder of the top eight going as planned. Stephen Silvagni made sure he was going out with a bang on his final night in navy blue, bidding on Fremantle’s Liam Henry and GWS GIANTS’ Tom Green, before trading the pick to Gold Coast SUNS who selected Sam Flanders. Carlton received picks 17 and 22 in return, while Gold Coast also received Pick 62. With those picks, Carlton used it to snap up slider, Brodie Kemp who was overlooked by Geelong – a team expected to pick him up – with the Cats going a fellow Geelong-based midfielder in Cooper Stephens who missed most of the year through injury.

The small forwards fell as expected with Kysaiah Pickett, Miles Bergman and Cody Weightman all going inside the top 15 picks, while Sam De Koning won the race for the third key position player behind Luke Jackson and Fischer McAsey when he was picked up by Geelong. Carlton on-traded its pick 22 to gain Pick 20 from Port Adelaide and pick up Philp – whilst also handing the Power, Pick 55. This meant Port Adelaide resumes the draft today with the coveted first selection in the second round – a smart decision given the fact that a number of clubs such as Collingwood were on record to try and target the pick if a slider they were keen on was still on the board. Thomson Dow was the last player picked in the first round with Richmond picking him up leaving a number of talented players still up for offer in the second round.

West Australian captain Deven Robertson was perhaps the biggest slider, touted as high as Fremantle’s Pick 7 at one stage, then linked to Geelong and Gold Coast – the latter traded up therefore did not have the mid-teens selection – but still remains without a club entering night two. His West Australian teammate Trent Rivers was also suggested to be a possible first rounder, while the likes of talls Josh Worrell and Harrison Jones remain available, as does South Australian captain Will Gould, and Oakleigh Chargers’ premiership captain Trent Bianco.

In two other minor trades, GWS GIANTS received Picks 62 and 70 from Collingwood in order to bump the Magpies up two spots to Pick 60. It was a win-win for both clubs given Collingwood has admitted it plans to only use three picks and therefore moved on its third and fourth selection in order to raise its third pick, while the GIANTS gained vital draft points. Meanwhile, Fremantle had to give up a 2020 second rounder as well as Pick 66 to Port Adelaide in exchange for picks 52 and 55 in order to gain some late selections for additional players following the matching of Henry in the top 10.