2019/20 NTFL Women’s Premier League wrap: Round 8 – Thrillers and blow outs and not much inbetween 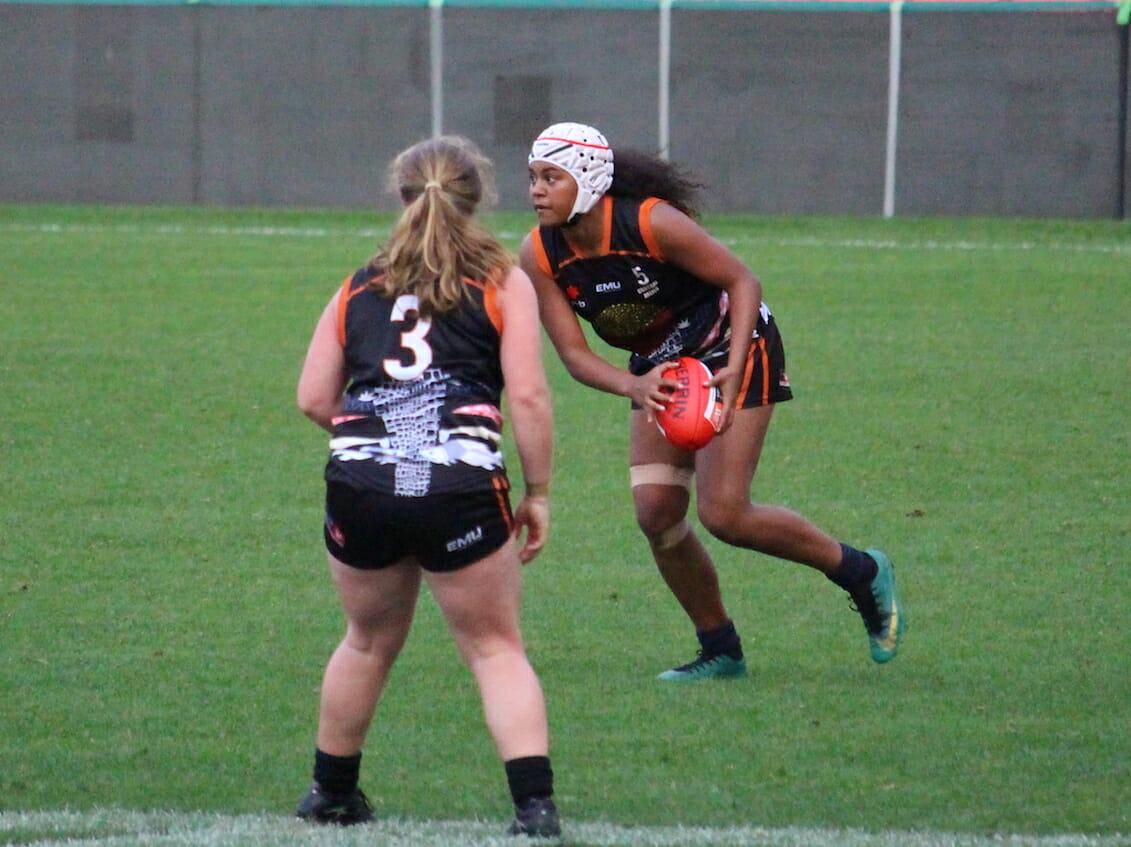 ROUND 8 of the Northern Territory Football League Women’s (NTFLW) was a mixed bag of results with some matches extremely close and others big blowouts highlighting the extreme level of difference within the competition.

After a slow start Nightcliff built its way back into the game to run out victors by two points in what was an upset win. They did not let a goalless first quarter dictate their match working hard in the second to have four shots on goal and limit the higher placed Southern Districts to three drawing within in three points at half time. Nightcliff kept plying its trade in the third before putting the nail in the coffin in the final term to notch up their fifth win of the season. It was a tight battle between the two sides with neither willing to give an inch but inaccuracy ultimately cost District. Mickayla Ward did plenty of damage on the scoreboard with two goals highlighting her impressive goal nous while teammates Jacqueline Anyon-Smith and Sophia Politis added to the match winning total. Youngster Shantel Miskin-Ripia left her mark on the game with her signature run and carry a real feature of her game while Jade De Melo was also recognised in the bests for her efforts throughout the match. Southern Districts also had a handful of key players that set the tone for its side with the likes of Kelsey Patterson converting a major along with the likes of Ebony Miller who had a quiet game in comparison to her 10 goal haul last week. In her first game of the season Lucy Murray did not muck around nailing a goal to keep her side in touch of their opponents but it was not enough to get them over the line.

The second game of the round resulted in another nail-biter with the margin coming down to a mere one point in favour of the Waratahs. The ‘Tahs skipped out to an early lead in the first quarter but were plagued with inaccuracy unable to capitalise on their opportunities in front of goal. The Buffettes came out with a point to prove in the second term piling on two goals to reduce the margin to three points heading into the main break. The deficit remained three points up into the third before missed chances by Waratah in the last quarter almost handed their opponents the game, scoring 1.4 compared to the Buffettes straight two goals. The goal scoring was evenly spread across Waratahs with Gemma Cusack maintaining her recent consistency in front of goal making it three consecutive weeks in which she has scored a major. Jenna Singh, Joanna Kolodziej and Lauren O’Shea rounded out the goal scorers while teammate Isabella Rapson-Staropoli was influential across the ground.

It was a complete and utter demolition with Pint simply running rampant for a full four quarters against their last placed opposition. Big River Hawks had no answers for Pint who outclassed them at every turn using their clever ball movement, speed and accuracy to really punish the Hawks. It is fair to say it was game on from the opening bounce with Pint piling on seven goals to set the tone and highlight their intent. They did not let up throughout the match not conceding a single point credit to their extreme defensive pressure paired with their attacking prowess. Casey Morris caused havoc in the forward half with her six goals while Ellie Ryan, Jasmyn Hewett and Jessie Baumer contributed three goals apiece to add further pain to the already struggling Hawks side. Kristen Smits clearly did not want to miss out on the goal scoring action with two majors of her own while an additional four players got on the scoreboard. Despite things not going their way throughout the match Sam Clarke, Zainab Mohamud and Johanna Daniels worked gallantly to try and give their side a fighting chance.

Despite scores drying up in the third term, the Palmerston Magpies had things all their own way for much of the match thanks to a dominant start to the game. The Magpies kept St Mary’s scoreless in the first half thanks to their intense pressure and own goal scoring ability to simply deny their opponents any opportunity to push forward. Palmerston showed why they are in the top four claiming their fifth win of the season sitting on equal points with the Wanderers meaning the percentage boost could not have come at a better time. Arthurina Moreen and Jessica Stassi led the way in attack for the Magpies nailing four goals apiece with the duo proving to be a real thorn in their oppositions side. Natasha Medbury, Iesha Ronberg, Billie Byers, Jessie Brock and Wynona Barlow could not be denied in front of goal adding to the total. Unfortunately, the same could not be said for St Mary’s who failed to trouble the scoreboard.

A mere two points separated the ninth placed Tracy Village and fourth placed Wanderers at quarter time before the tables quickly turned. Tracy took control of the game to make the most of their opportunities and open up a handy lead heading into half time. But the Wanderers refused to back down, kicking it up a gear to get the game back on their terms and eventually run out 21 point victors thanks to a final quarter blitz. Shekeine De Stage threw her weight around in the forward half to boot two majors while Maria Billias made no mistake in front of goal nailing one goal for the game. Sophia Mauboy featured in the bests for the second consecutive week along with Morgan Johnston who made her presence felt on the footy field with her damaging style of play. In her second game of the round Karita White continued her merry goal scoring way, with another major to help get her side over the line.