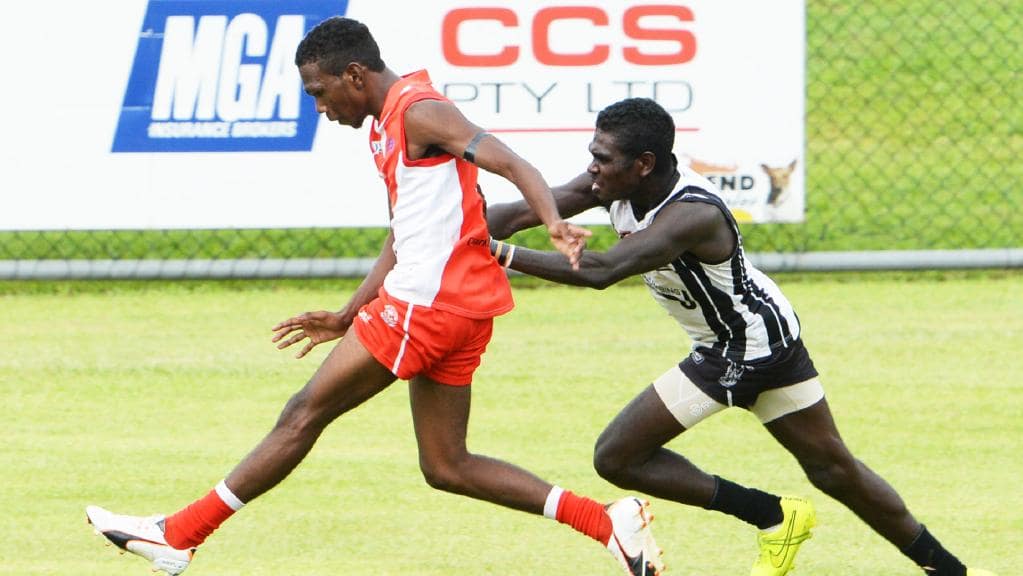 WARATAH kicked off the inaugural Northern Territory Football League (NTFL) Men’s Premier League Indigenous Round with a bang, setting the tone for a big weekend of action. Fans will be treated to another two top five clashes, with Darwin hosting Wanderers before St Mary’s takes on Nightcliff tonight, while Tiwi will hope to bring a halt to Southern Districts’ run in the afternoon game.

Waratah won convincingly in the first ever NTFL Indigenous Round fixture, thumping Palmerston by 89 points at TIO Stadium under Friday night lights. The win is the Warrior’s second in as many weeks, consigning fellow bottom two battler Palmerston to its seventh defeat via a 17.10 (122) to 3.5 (23) scoreline.

A goalless first half from the Magpies meant there was no answer for Waratah’s physicality and nous around goal, with the Warriors piling on eight unanswered majors to head into the main break 50 points to the good. It was smooth sailing from there as the Warriors put on another nine goals to finish the game, with Palmerston finally getting on the board in the third term and finishing just shy of a four-goal total – its lowest for the season. Kim Kantilla lead the onslaught with six goals, joined in the best by the likes of Timothy Mosquito, Henry Kerinaiua, and Brendon Minkulk.

With two wins under their belts, the Warriors will be looking to build a top five charge when they face Darwin next time out after having a Round 3 win against the Buffs revoked for a team sheet mishap. Meanwhile, Palmerston’s search for a maiden win continues into Round 8 as it hosts Southern Districts on Saturday evening.

Tiwi Bombers will be looking to play spoiler in Southern Districts’ rise to the top when the two sides clash to open Saturday’s proceedings. The heat is on the sixth placed Bombers with Waratah’s win meaning the Warriors are breathing down their neck in the bottom two. A bounce-back win would help Tiwi keep pace with the finals pack, while four points would see the Crocs keep touch with the undefeated Nightcliff in the race for top spot. The Bombers have been exiting in patches but have not been able to produce consistently enough, and the Crocs will snap up any chance they get in small lapses of concentration.

Much of the Tiwi core remains with Rodney Baird, Nathan Djerrkura, and Ross Tungatalum all named down the middle, with speedsters Adam Tipungwuti, Dion Munkara, and Richard Puruntatameri named on an extended bench, while Brayden Rioli returns and Jeffrey Simon slots into midfield. They all have what it takes to help take down the Crocs, but will be matched in class by the likes of Ed Barlow and Charlie McAdam in Southern Districts’ midfield, while the forward quartet of Sam Barnett, William Farrer, Dylan McLachlan and Beau Schwarze is sure to cause headaches.

The Crocs are back to their damaging best and keep finding wins, but do not count Tiwi out of the contest with its eye-catching lineup.

A third-consecutive top five clash awaits Darwin as it faces Wanderers on Saturday evening with both sides hoping to solidify their finals standing. The Buffs risk falling behind in the finals race as the midway point of the season approaches, with Waratah and Tiwi sure to turn up the heat from the bottom three. They are also coming in off losses to the top two sides, while Wanderers will be buoyed by two wins in its last three outings. The Muk Muks have been unable to string their wins together, and one over Darwin here would come in handy as they look to leave the trailing pack in their wake.

Adam Sambono again comes out of the Darwin lineup, with Joe Anderson returning to midfield after a forward stint, joined in there by last week’s best afield, Patrick Boles. Matt Campbell is a handy addition, set to feature up forward alongside young goalsneak Brayden Culhane. But Wanderers have their own rising stars inside 50 in the form of Beau O’Connell and Davin Ferreira, while versatile tall Joel Jeffrey has been named in midfield. Ex-AFL experience also comes in spades as Marlon Motlop, Liam Jurrah, and Liam Patrick all look primed to feature for the Eagles.

While Darwin has been on a skid in the win column, the Buffs’ true form is difficult to measure having faced the top two sides. Wanderers is in the same boat, but has arguably shown more extended form and come in as favourite with its superior ladder position.

Arguably the game of the round will again be left until last as St Mary’s pushes to climb back into the top two and hand Nightcliff its first defeat all in one fell swoop on Saturday night. The Saints have improved out of sight from last season, but have faced a couple of hurdles this season in an otherwise consistent six rounds. The formline is much more linear on the Tigers’ end however, enjoying a streak of six-straight wins to open its premiership defence. The result of this contest is set to answer the open question of which side will be Nightcliff’s closest flag threat, and the Saints look primed to take that mantle.

But St Mary’s will have to pull it off without their leader, Raphael Clarke, replaced by Victorian spearheads Jackson Paine (ex-AFL) and Jackson Calder in the key forward spots. The midfield trio of Shannon Rioli, Nate Paredes, and Nick Yarran should also work a treat against the likes of John Butcher and James Tsitas. Those two, along with legendary utility Cam Ilett and the in-form Liam Holt-Fitz will be key for the Tigers, with their perfect record set to face its biggest test in this outing.

It is always hard to look past Nightcliff, but this game should be a cracker and has real implications on the pointy end of the NTFL ladder heading into the mid-season period.