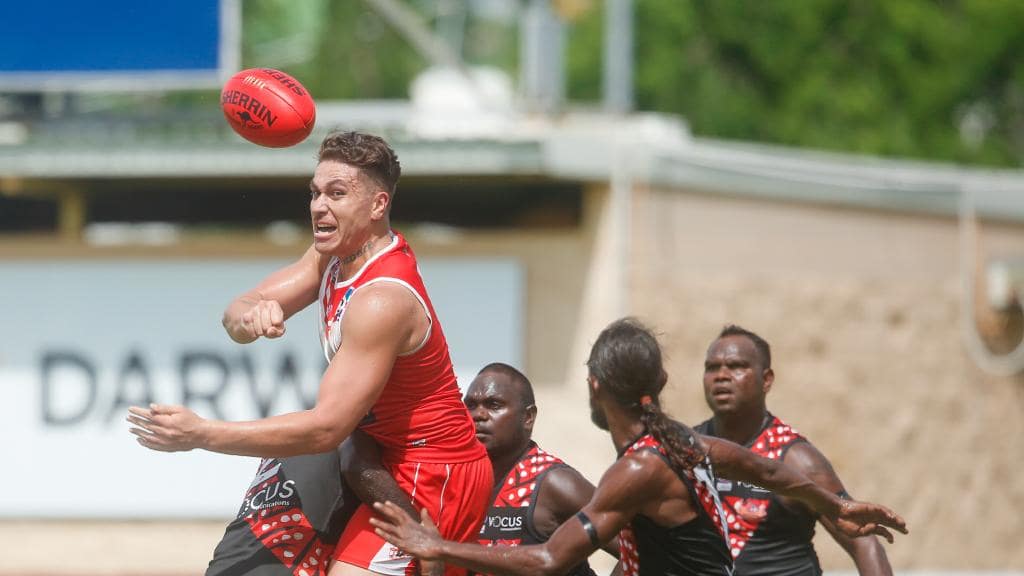 WARATAH officially got on the board in Round 6 of the Northern Territory Football League (NTFL) Men’s Premier League, winning out in a bottom three clash. Meanwhile, Wanderers took advantage of Darwin’s slip-up to jump into fourth place, while Nightcliff extended its gap at the top with another grinding win.

Steve Stroobants booted Waratah to its maiden official win in season 2019/20, kicking six goals in a high-scoring affair. The breakthrough win also saw the Warriors claim the Maurice Rioli Cup, with home fans treated to the entertaining 21.15 (141) to 15.8 (98) result.

Stroobants was joined by Henry Kerinaiua (five goals), Kim Kantilla (three), and Abe Ankers (three) in an impressive list of multiple goalkickers for Waratah, with influential skipper Brodie Carroll also finding the big sticks on one occasion. It was the same case for Tiwi as Gerrard Cunningham led the way with four majors, followed closely by bigman Liam Wale-Buxton (three), the zippy Dion Munkara (two) and ex-Dee Austin Wonaeamirri (two). Both sides were relatively on form inside forward 50, but Waratah’s 13 more scoring shots proved its higher rate of production.

An early three-goal buffer was the difference for most of the bout for Waratah, with the Warriors repeatedly breaking away and being reigned back in each term. The Bombers managed to boot the opening goals in quarters two and three and even cut the margin to just 14 points in the latter term through Wale-Buxton, but the hosts had all the answers and continued to pile on goals of their own throughout. A 7.0 to 6.2 third quarter was the showcase period of play for the game, highlighting the clinical scoring abilities of either side in the open contest.

Both sides find themselves stuck in the bottom three, one and two games adrift from the finals spots. Waratah will fancy its chances of further bridging the gap as it takes on a lowly Palmerston next time out, while Tiwi faces a tough ask in rebounding against the red-hot Southern Districts on Saturday afternoon.

The Tye-Bonson Memorial Shield went to Nightcliff on Saturday as the Tigers found a way once again, beating Darwin by 23 points to keep their perfect record in tact. The reigning premiers built into the game well after a slow opener to lead at every other break in the 14.5 (89) to 9.12 (66) victory.

A six goals to three second stanza saw Nightcliff claim the lead at the main break, not looking back to almost mirror its score perfectly in the following half with a wealth of class in front of goal. The 14.5 effort was matched by sound defence too, with the Tigers not allowing the Buffs more than three goals in each term and keeping them to two in a tense third. As has constantly been the case, the undefeated side was better for longer and outlasted its opponent to salute for a sixth time in season 2019/20.

Nightcliff’s James Tsitas and Darwin’s Patrick Boles were recognised as best afield for their respective sides in the memorial match, both continuing solid runs of form in recent weeks. Speaking of, Kaine Riley and Liam Holt-Fitz were also named among the Tigers’ best half-dozen for the third consecutive game, while Dylan Joyce booted four goals and Cam Ilett backed up with another two. Adam Sambono only managed the one goal on return for Darwin as Daniel Stafford‘s three majors led the effort, with Chris Williams the only other goalkicker to also be named in the Buffs’ best.

The Tigers’ lead at the top was extended to six points as the previous top four all played off, also boasting 42 percentage points more than its nearest rival with third placed St Mary’s up next. Darwin will look to bounce back from sliding to fifth as it faces the new fourth place side, Wanderers on Saturday evening in what is sure to be a cracker.

Wanderers climbed into fourth with a comfortable 33-point win over Palmerston on the road to close out Saturday’s proceedings. Five of the Muk Muks’ goalkickers found the big sticks more than once as they simply had too much for the winless Magpies in the 7.9 (51) to 12.11 (83) result.

The lead was built early-doors as Wanderers zipped out to a 31-point buffer at the main break, looking every bit the finals-bound side. The Magpies had few answers as the battle wore on and could not bridge the gap enough as they continued to leak goals. The final score was prettied up by three late Palmerston majors, but the home side was still well adrift as the final siren sounded to put its sixth defeat in the books.

Keidan Holt-Tubbs was a shining light once again for the Magpies, booting over half of his side’s goals (four) in the loss to be named their best afield. Blake Launer was also among the best for the second time in three games, while the likes of Sandy Brock and Aaron Lonergan also stood up. For the Eagles, former-Port player Brett Eddy snared three goals on debut, but it was Braedon McLean who was named their best. Ronald and Keelan Fejo both found the goals and were influential, with youngsters Beau O’Connell and Joel Jeffrey also hitting the scoreboard.

Wanderers will look to lock down fourth spot next week as it takes on the newly removed Darwin in Round 7, while a bottom two clash beckons for Palmerston, presenting the Magpies’ another good opportunity to get on the board in recent weeks.

Southern Districts continued its surge up the NTFL ladder, overcoming fellow finals hopefuls St Mary’s by 12 points in Sunday’s lone fixture. The 12.9 (81) to 10.9 (69) scoreline did justice to the closeness of the bout, with one dominant period for the Crocs enough to see them over the line and into second place.

A trio of Crocs – Dylan Barry, Will Farrer, and Ed Barlow – each claimed a hat-trick of goals to lead the winning effort, with Barlow the sole multiple goalkicker to also feature among the best. Dylan McLachlan and Zach Smith continued their good runs of form to also be thereabouts, while Nikolaus Rokahr bobbed up in the best for the second time in three games. For St Mary’s, Jackson Calder was the only player to hit three goals in a more even scoring spread, with Nate Paredes the only other multiple goalkicker. Shannon Rioli pitched in with an important major and was named among the best with Nicholas Yarran, but both were behind Leroy Larson as the Saints’ most influential player.

While the Crocs’ fast start set up a two-goal buffer which they would hold for much of the match, a four-goal to nil third term made all the difference in setting up the win. With the four points all but beyond them, the Saints finished the better of the two sides but left too much for too late as they fell by that telling two-goal margin.

St Mary’s will have to back up with another top four clash in Round 7 as the undefeated Nightcliff awaits, with a win crucial to keep within touch of the Tigers. Meanwhile, the Crocs will fancy their chances of a fifth consecutive win as they face Tiwi next time out and look to take advantage of the St Mary’s/Nightcliff result.