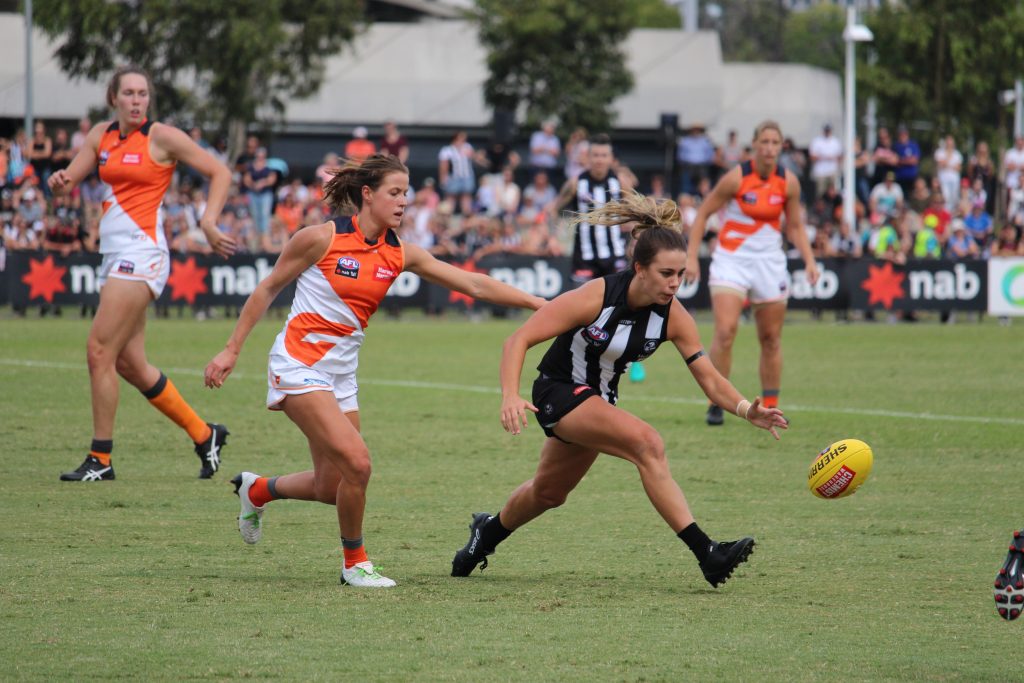 IT was a disappointing 2019 season for Collingwood, with a combination of rebuilding through youth and unlucky losses culminating in a Conference wooden spoon. The Magpies were competitive in all their cross-conference games and were unlucky not to potentially get an extra couple of wins, but ultimately could not match it with sides for the full four quarters. After a massive influx of youth walked into the club at the start of last season, it was a different approach 12 months later as Collingwood poached the player of the trade period by securing arch rival Carlton’s captain, Brianna Davey for most of the Magpies’ picks. With pick two and AFL Women’s Rising Star Chloe Molloy also returning after missing the entire 2019 season, the Magpies effectively have two elite talents walking into the Round 1 side.

Aside from Davey, Collingwood had a relatively quiet off-season, with Darcy Guttridge and Iilish Ross departing to expansion clubs, Cecilia McIntosh retired, while the Magpies also delisted a further five players. One of those – Jordan Membrey regained a spot on the Magpies’ list, picked up in the recent AFL Women’s Draft alongside Oakleigh Chargers’ speedster Alana Porter who spent the VFL Women’s season on Collingwood’s list, fellow speedster Machaelia Roberts, former GWS GIANTS’ player Ebony O’Dea and Casey Demons key utility, Kaila Bentveltzen. While the AFL Women’s season was fairly disastrous in terms of wins and losses, the VFL Women’s side took home the premiership, with plenty of AFLW-listed players standing out across the year. That belief, along with the vital inclusions are likely to spur the Magpies on to move up the ladder in season 2020.

The Magpies’ best 21 is more stable than many other sides, with the draftees likely having to force their way into the side being later picks. Given O’Dea’s links with Steve Symonds through Norwood, the former GWS GIANTS midfielder could well play a specific role within the team and could be a Round 1 starter. The Collingwood defensive back six is pretty settled, with about the last two spots able to be rotated between a number of players, but the likes of Livingstone, Schleicher, Brazill and Casey are pretty set, with Allen and Shevlin able to fill there, or in each of the other thirds on the ground. Bentveltzen has transformed into a defender and could stake a case for a starting role, while Molloy can play at either end. We have her up forward with D’Arcy and Alexander who are the two locks inside 50, while captain Chiocci showed she can play that defensive half-forward role with scoreboard impact as well. Dargan and Lynch fill out the front six because of their upside and rotational ability on wings or through the middle.

The onball brigade is an interesting one. Given Layton’s form at VFLW level, she might well be given first crack at the ruck role, but it is expected they could play the two rucks and Collingwood’s number one ruck from last year – Hynes – will rotate both through that position and up forward. The three midfielders are fairly straight forward, with Davey, Lambert and Bonnici all offering different aspects to the team. The last five to seven spots between the bench and emergency is tough to pick, with the remainder of the list fairly even, and the newbies in Membrey and Roberts already readymade for senior football, while Porter will take some time but could get some games later in the year. Gourlay and Cann made our bench because of their continued improvement at VFLW level and the upside they have, while Grant is a terrific team player likely to be given an early crack to maintain her spot in there.