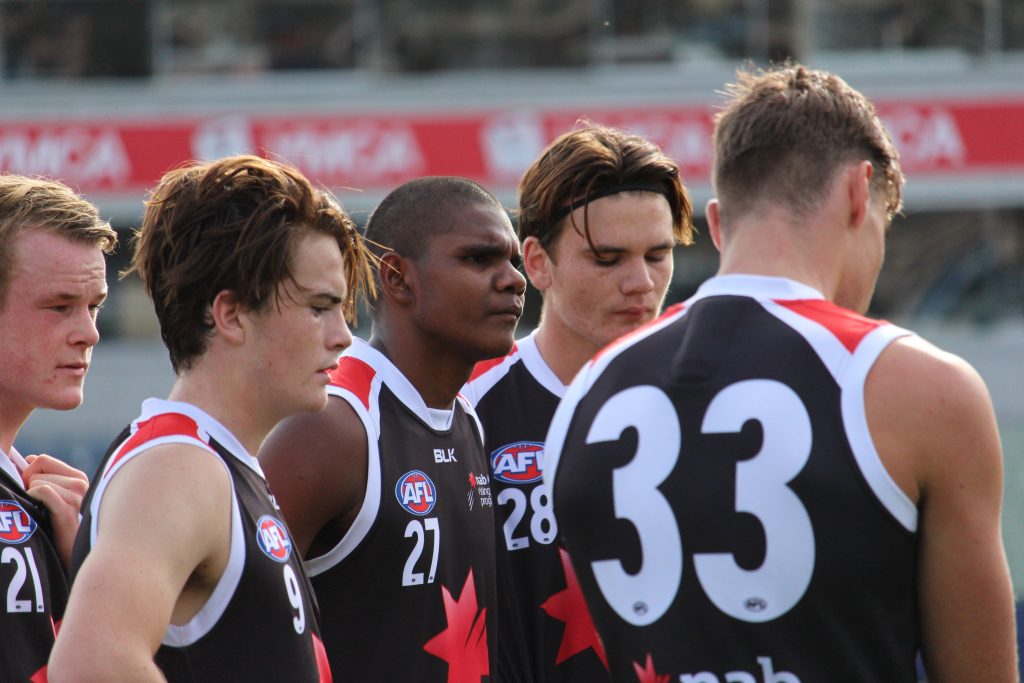 NIGHTCLIFF remains the sole undefeated side after four Northern Territory Football League (NTFL) Men’s Premier League rounds, while Palmerston and Waratah continue to search for their first wins. Elsewhere, St Mary’s put Darwin’s first official loss on the board in the weekend’s only top five clash.

Southern Districts continued its work into form, outlasting Waratah to win by 42 points in the Round 4 opener. The Crocs stayed strong under a couple of Waratah surges, keeping ahead at every break in the 16.13 (109) to 10.7 (67) result.

A deadly 10-minute spurt in the first term proved more than the difference for Southern Districts, with an impressive seven individual goalkickers getting on the board in the second half of the opening term. The goals somewhat dried up after that as Steve Stroobants chimed in to bring the margin back to seven points in the next stanza, only to see the Crocs run away with the game comfortably amid 34-degree heat. Ultimately, it was Waratah’s lack of options which cost them dearly as Southern Districts’ brigade of dangerous forwards helping themselves to 29 scoring shots.

Norwood products Sam Barnett and Brady Dawe teamed up to snare two goals apiece for the winners, with Barnett’s repeat leads and high marking impressing the Aboriginal TV Channel 4 crew. At ground level, it was the likes of Josiah Farrer, Beau Schwarze and a bandaged Jayden Clarke who compounded the damage throughout, while ex-Sun and Docker Michael Barlow enjoyed a steady entry into the NTFL through midfield. For Waratah, Stroobants was superb with his three goals, giving the Warriors a sniff heading into half time. He was beaten out by Jae McGrath‘s game-high four goals though, accounting for seven of their side’s 10 majors.

Next up for the surging Crocs is a grudge match against the Darwin Buffaloes, who suffered their first official loss this weekend. Meanwhile, Waratah’s search for a first official win heads to Gardens Oval as the Warriors play host to an unbeaten Nightcliff.

Second time proved a charm in consigning Darwin to its first loss, as St Mary’s bettered the Buffs by 22 points on Saturday. The Saints were consistent throughout, with a four-goal to nil third term proving the key period as they ran out 12.12 (84) to 9.8 (62) winners.

St Mary’s maintained a satisfyingly linear scoreline, booting 4.4 in the first and third terms while adding 2.2 in the second and fourth to end at an even 12.12. Former-St Kilda duo Raphael Clarke and David Armitage were outstanding for the Saints, with Clarke notching three goals alongside ex-Roo and Blue Jarrad Waite, while Armitage earned best afield honours from midfield. The usual suspects of Nicholas Yarran and Nate Paredes were impactful, each finding the goals to go with their damaging forward run. New recruit Tom Gilbert also worked into the team well, named among the best handful for St Mary’s.

For the now 3-1 Darwin, young forward star Brayden Culhane kicked his second big bag for the year (five) as the Buffs’ main treat, with only four of his teammates also finding the goals. The likes of Cameron Stokes and Patrick Boles provided their usual output after Darwin’s slow start, but the team as a whole could not keep it going for long enough as St Mary’s capitalised on quiet patches. Others to impress were Mark Quinn and Stephen Tahana, but the Buffs were sorely missing a bit of spark to get them going against the much-improved Saints.

Darwin’s attempt to rebound will come against Southern Districts, a tough ask for any side at the moment, while St Mary’s faces Wanderers in a battle of two very exciting teams vying for finals berths.

Wanderers brought Tiwi back down to Earth in Round 4, grinding out a 14-point win on Saturday night to stay clear in the top five. The Bombers started better, but were outdone for the remaining three terms as they went down 10.12 (72) to 8.10 (58).

Exuberance of youth has been a key asset of the Eagles’ resurgence, and Michael Cooper was this time at the forefront as he earned the Round 4 Rising Star nod for his two-goal effort. Under-17 gun Joel Jeffrey needs no introduction, and he matched Cooper’s effort alongside Simon Bates to lead the winners’ forward charge. Overcoming a slowish start, the Muk Muks booted six goals to one in the second term to claim the lead, never looking back in what was an arm-wrestle of a second half with both sides only managing three goals apiece.

Jason Puruntatameri and ex-Cat Nathan Djerrkura were again outstanding for Tiwi, with Rodney Baird one to also stand up in the loss and Sylvani Babui returning his best outing for the year. Gerrard Cunningham booted two majors to take his tally to eight in three games, while Ross Tungatalum also found the goals twice to round out the multiple goalkickers. It was a down display from the Bombers against an equally-promising side in Wanderers, with ground still to make up outside of the top five as they fall six points behind the pack.

Another night game is in the midst for Wanderers, with the Eagles’ fixture against St Mary’s in Round 5 shaping as being the most exciting of the weekend. The Bombers will fancy their chances of bouncing back against the winless Palmerston, but cannot take anything for granted in their current position.

Nightcliff’s perfect premiership defence rolls on as it recorded a thumping 101-point win over Palmerston on Sunday to round out the weekend’s proceedings. The Tigers booted at least five goals in each of the last three terms to romp to the 19.18 (132) to 4.7 (31) result, proving far too strong for the winless Magpies.

It was not always smooth sailing for the Tigers though, only managing to etch out a four-point lead at the first break as the sides evenly shared four majors. But it was party time from then-on as Nightcliff piled on 17 goals to Palmerston’s two to breach the 100-point margin upon the final siren. The heavy loss sees Palmerston languishing in last place with a percentage of 43.1, joined by Waratah after the Warriors’ Round 3 win was revoked.

NT legend Cam Ilett was again terrific with a game-high four goals – equalling the Magpies’ tally – joined in the best handful of players by fellow goalkickers Michael Hagan (three) and Liam Holt-Fitz (two) in the best among six Tigers to find the goals on more than one occasion. Tyson Kidney, Daniel Bowles and Kaine Riley all again put in big performances to continue their form, while Trent Melville bagged three majors in his standout game for the season thus far.

Palmerston’s campaign to get on the board continues in Round 5 against fellow bottom-three side Tiwi, while Nightcliff will look to keep its distance at the top and remain undefeated when it travels to face another winless side in Waratah.