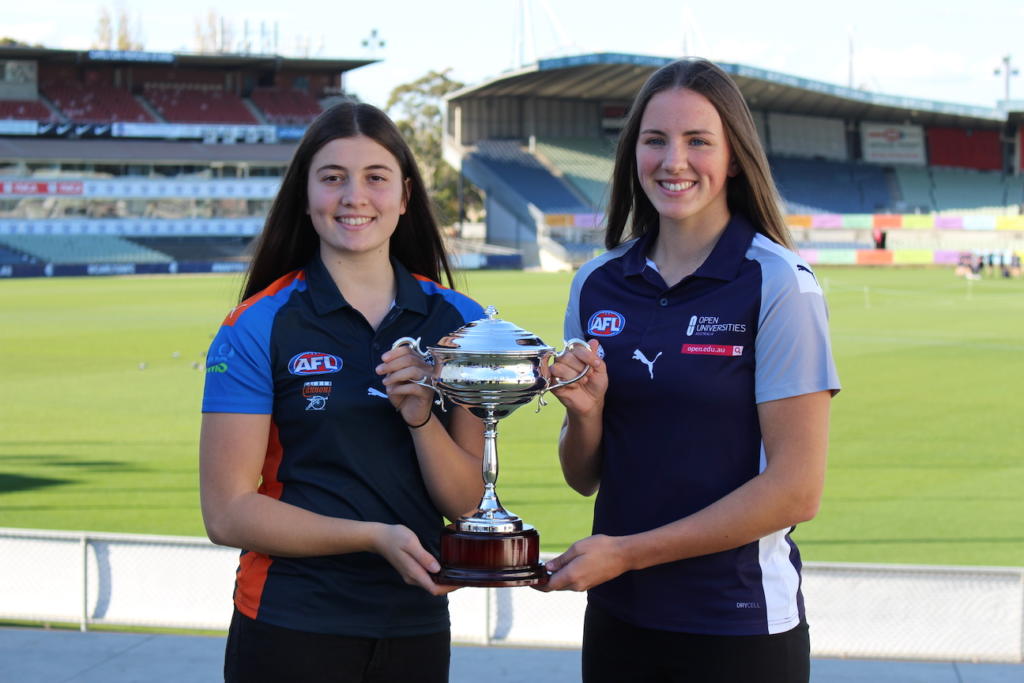 GABBY Newton, Lucy McEvoy, and Georgia Patrikios; dubbed pre-draft as the three players vying for the honour of being taken first off the AFL Women’s Draft board.

But ask all three about whether they knew what was to unfold on Tuesday afternoon, and all three almost unanimously insist they had not the slightest clue.

“I wasn’t sure going in,” Bulldogs’ number one pick Newton said. “I knew Lucy and Patrikios were obviously also big contenders but I’m so glad (the Bulldogs) picked me up, I can’t wait to be a part of it.”

“I sort of had no idea coming in so it was just ‘Whatever happens, happens,’ St Kilda’s Patrikios added. “I’m happy to be at the Saints and (I’m) just going to move from there.

“Carlton did say they were keen from the start and I was pretty keen… to get to pick two,” Carlton’s McEvoy told the club’s media team with more conviction. “It’s so good though, so exciting.”

McEvoy was incidentally the one to inadvertently create the ‘big three’ tussle, throwing a spanner in the works as she nominated for the Victorian Metro draft zone. Hailing from Geelong and rising through the Falcons’ junior pathway, it seemed the Cats’ AFLW side was destined to pick up another top-five talent at a cut price after snaring Olivia Purcell with pick 14 last year. That was not to be, with McEvoy’s choice “to get out of (her) comfort zone” planting even more intrigue into the top-end.

“It was pretty much based off my studies next year, I’m hoping to do paramedicine,” she said. “I’ve got my exams coming up so hopefully I can put my best foot forward in that and get the score that I need.”

“I would’ve loved to play at Geelong, I’ve got really good friends there but I think for me to grow, as a person, it would’ve been to tick the Melbourne box.”

In an interesting twist, all three players also had unique ties to pick two holder, Carlton. McEvoy’s father, Phil played 50 reserves games for the Blues during the 1970s and 80s, while Newton played two games this year for their VFLW side and Patrikios is studying sports coaching and development at the club’s College of Sport. Needless to say, they are all still stoked with how it all unfolded nonetheless.

“I just need to pinch myself because I can’t believe it’s actually happening to be honest,” Newton said. “All the girls drafted to the Doggies, Liz (Georgostathis) and Gem (Lagioia) as well and Izzy Grant, they’re all such good friends. “I can’t believe we’re all going in together, it’s so exciting.”

“It’s so exciting… to know that I’m starting at a new club, I get to meet all these new people which I’m so excited about,” she said. “Hopefully I can make a good first impression, I’m really looking forward to getting stuck into it.”

Going against the suggested unknown order of events heading into the big day, Patrikios came armed with arguably the best line of any draftee on the day.

“It’s going to be great to bring footy back to Moorabbin,” she said, becoming an instant hit with the Saints faithful – and likely the marketing department, too.

“Lucy and Gabby are amazing players and even (more) amazing people. “They deserved it, they’ve worked so hard, they’ve put a lot of work in over the last couple of years and they’ve been amazing. “I can’t wait to see how they go next season,” she added, becoming an even bigger hit with her fellow big three buddies.”