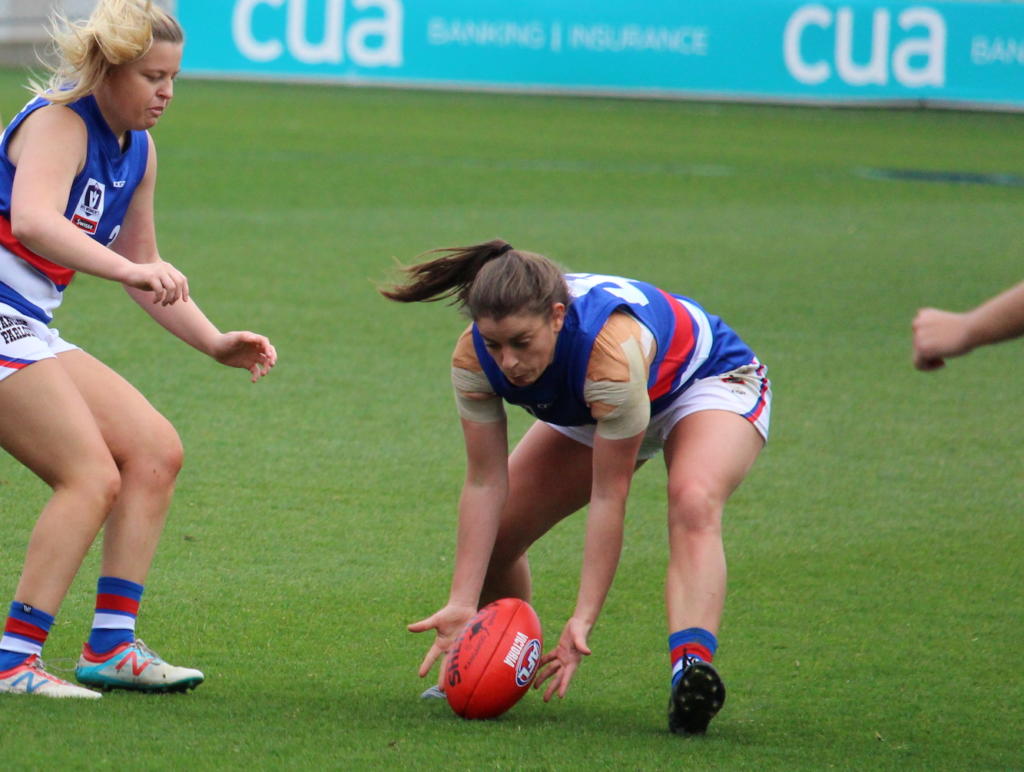 DRAFT day shocks are ironically commonplace nowadays, and you can add Ellie Gavalas‘ rise to become a top 10 selection to the list.

The 23-year-old had her name called by North Melbourne in the first round of Tuesday’s draft having only taken up the Aussie rules code two years ago. Speaking minutes after the fact, Gavalas was still stuck in the “whirlwind” of her shock early selection with little inkling of it happening beforehand.

“Whirlwind’s a pretty good word,” she said. “I’m feeling pretty excited and shocked at the moment… it’s been a massive year and to top it off to become a Kangaroo is pretty exciting.”

The new Roo’s history in sport runs deep, having moved on from a promising soccer career to pursue a different footballing code. Gavalas grew up in Tasmania but also had family in Melbourne, with her move to the mainland originally inspired by that round-ball potential. Her first meaningful experience with the oblong ball came as she joined the Marcellin Old Collegians in Melbourne’s north-east, sparking a rapid rise to the elite level.

“Coming from just playing footy for two years… mainly this year and last year at Marcellin,” Gavalas said. “It has been a massive whirlwind and I’m pretty excited.”

After her initial experience at Marcellin, Gavalas became a wildcard entrant to Western Bulldogs’ VFLW squad in 2019, making her debut in Round 2 and never looking back to average 16.4 disposals and 4.1 tackles across 16 games – becoming a lock in the grand finalists’ starting 23.

Her move from the Bulldogs into the Kangaroos’ system is akin to that of AFLW superstar Emma Kearney – minus the fanfare – who will undoubtedly form a hardened midfield partnership with Gavalas.

“Absolutely I’m looking forward to playing alongside (Kearney),” she said. “To be playing with someone like Emma is awesome so I’m super excited to get started.”

The switch also marks somewhat of a homecoming for the Apple Isle product, who joins Launceston exports Mia King and Abbey Green at the Tasmanian Roos. The Roos’ home games across Bass Strait and academy connection to the region also bring Gavalas full-circle, and even the best script writers would struggle to match the sentimentality of that journey.

With only her everyday job as a physiotherapist to compete with celebrations and her emerging career, the mature-ager is sure to make an immediate impact among the raft of slightly younger draftees who shared the same honour on Tuesday.