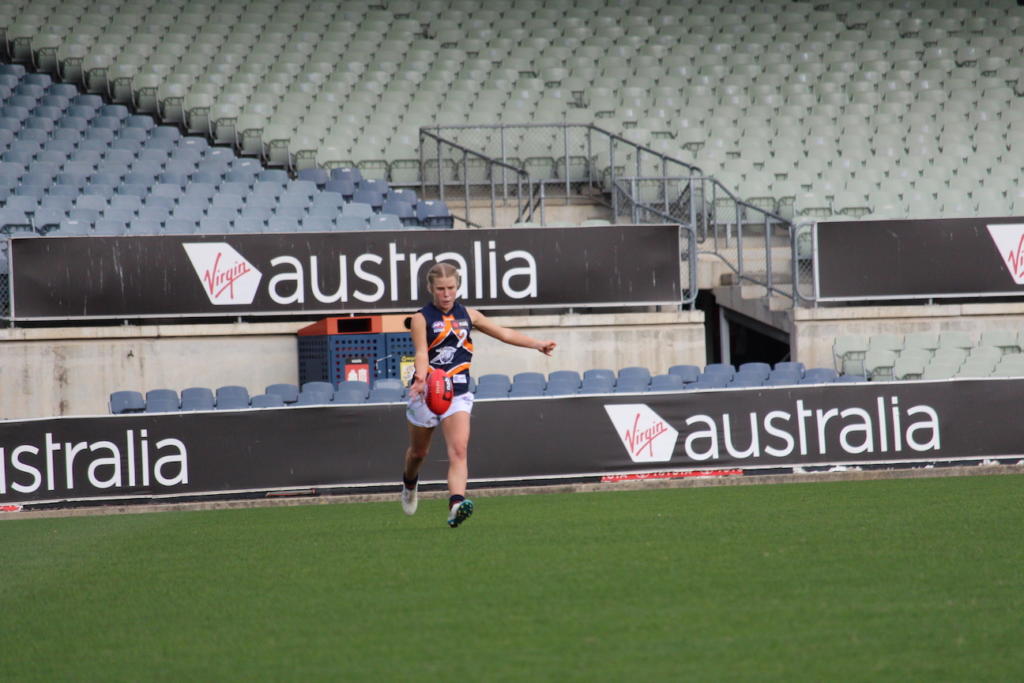 CALDER Cannons product, Felicity Theodore proved to be a lynchpin in defence using her nimbleness and speed to evade players and burst away from the pack time and time again. Signed with Essendon VFLW, Theodore aspires to follow the same path of those before her in particular, NAB Rising Star Maddy Prespakis who introduced her to the sport.

“I got into footy through Maddy Prespakis who plays for Carlton. She actually pulled me over one training session and was like ‘come to training’ so that’s how I started,” she said.

Prespakis had a continued influence on Theodore, captaining her last season and leading from the front both on the footy field and off the park.

“I hope to follow Maddy’s footsteps and get drafted but I’m just at the moment hoping to have a really good season and enjoy myself,” she said.

The Rising Star proved to be an inspiration for Theodore who credited her effort on the field and sheer class while also highlighting her importance at the Cannons throughout their time together.

“It was amazing, every game she just gave 120 per cent and it was so inspiring to see,” she said.

The nippy defender worked tirelessly throughout the year securing a spot in the National Championships with Vic Metro credit to her gut running, versatility and ability to break lines and while she has a spot with Essendon’s VFLW side is aware of elements she must improve.

“Definitely my quick kicks so like just getting kicks and really trying to hit up a target,” she said.

She relished the new opportunities throughout the 2019 season, taking the younger players under her wing and capitalising on her chances to impact across the ground.

“I’m just looking forward to this season as a whole and being able to play with my teammates, the coaching staff that are amazing and just to improve my game,” she said at the NAB League Fitness Testing Day earlier this year.

Theodore’s move from the attacking 50 to defence paid dividends with the talented small making the Vic Metro side. In the NAB League Girls competition, Theodore averaged 8.3 disposals, 2.0 tackles and more than a rebound per game, but it is her speed and dare to create options up the field that set her apart. She played a similar role for Vic Metro, running hard for almost identical statistics, and holding her own against the nation’s most talented players.

Then returning to Victoria, Theodore tasted Victorian Football League Women’s (VFLW) experience with Essendon, where she averaged 8.3 disposals and 3.3 tackles, not afraid to throw herself into the contest against stronger bodies. Now with some good form behind her throughout the season across three different levels, Theodore is hoping to join Prespakis in the AFL Women’s.