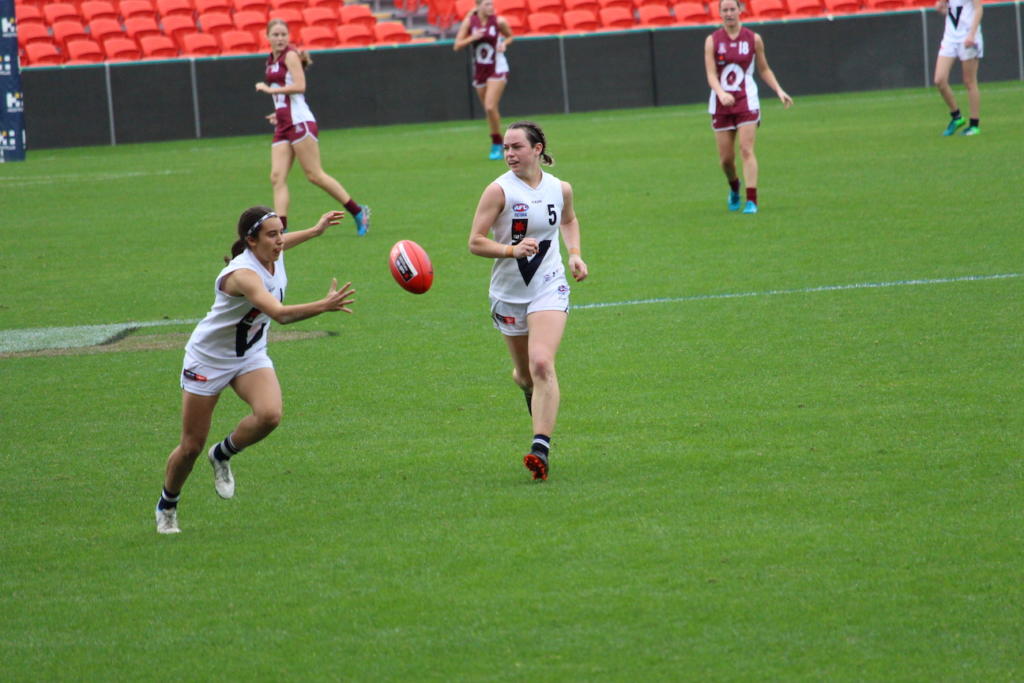 DESPITE standing at about 156cm, Geelong Falcons’ Elise Vella has a big impact every time she is out on the field thanks to her ability to think through plays quickly and move nimbly around the ground. Vella showed she is adaptable this year, playing across three different levels with Geelong and Vic Country.

“We started off with Geelong Falcons, we got in the prelim, did pretty well but unfortunately we lost,” Vella said. “From there, it was Vic Country where we lost our game to Metro but won all our games in Queensland, and from there we played a few games with Geelong VFLW club.”

Change is no problem for Vella who has a passion for Australian rules football, enjoying the team atmosphere that the code brings. That, along with her ability to evade opponents and create separation credit to her agility and speed, make it the perfect combination for a player driven to reach the highest possible heights.

“I just like playing, I just love the sport, love footy so much, love playing with my friends, it’s so nice,” Vella said. “I think because of my size, my speed is one of my strengths. “I like the agility and 20m sprint the bests. I think because I’m a smaller player I like being more agile.”

Playing for the Falcons, Vella averaged 10.6 disposals, 1.1 marks and 2.3 inside 50s per game this year, being that outside runner in transition, winning the ball in space and putting it forward for her team to hit the scoreboard. She also averaged a couple of tackles per game, showing she is capable of applying great defensive pressure as well.

Vella said she was hoping to work on her confidence and strength around the contest, something she had been developing as a member of the Rookie Me Academy. While many players might be daunted fronting up to the NAB League Fitness Testing Day in the pre-season, it was a different feeling for Vella, who knew plenty of faces with the testing day hosted by Rookie Me at Maribyrnong College.

“It’s really good to be familiar with some of the team around here when you come in,” Vella said.

The quick winger has had an impact on the Rookie Me Academy, with Head of High Performance Darcy Waugh describing Vella as a “natural footballer”.

“Elise has so much natural ability, she seems like a natural ball winner,” Waugh said. “She moves really well and just finds the ball. Despite her size, she’s an attractive prospect because of how she plays. “What I tell other people is she makes the players around her better.”

Now with her top-age year in the books, Vella is a player with a big future, whichever level it may be at, but if she is to be drafted into the AFL Women’s, Vella said she would not hold back once at a club.

“I think I can offer a great personality and put in 100 per cent effort for everything that I do,” she said.