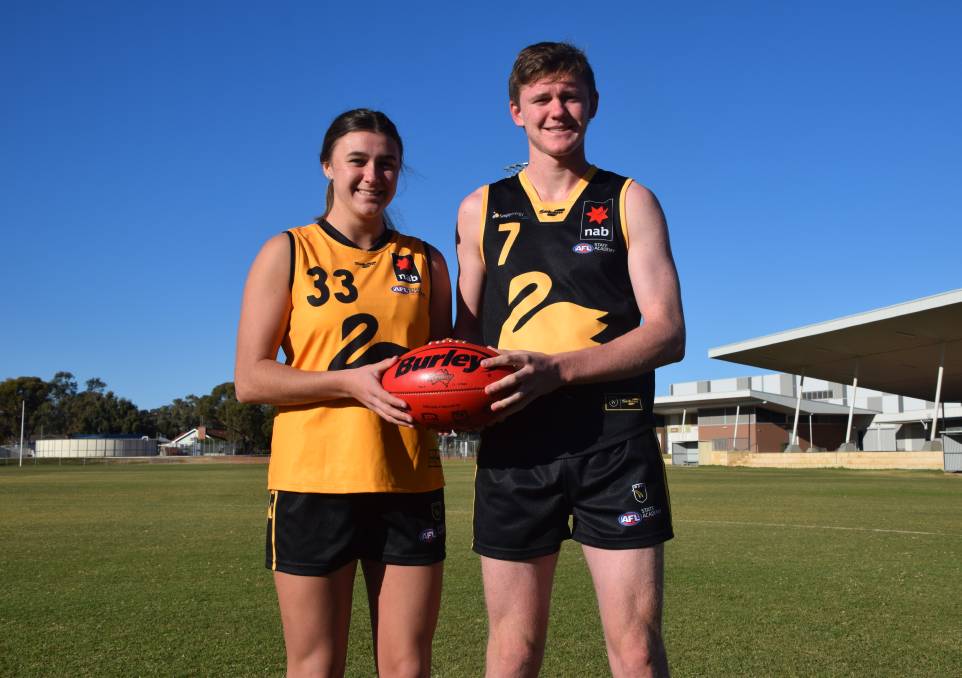 ONLY still new to footy Emma O’Driscoll is taking each moment as it comes and enjoying the ride despite being an overager. O’Driscoll was a late bloomer to the sport and has not put a foot wrong since her inception into the game, steadily developing and posing a dominant threat credit to her skill.

“So I only started playing footy last year, so in Year 12 – which was in 2017 – I went to school country week,” O’Driscoll said. Just a week of football at the school country week and then one of the ‘Deggers’ – Clint Degebrodt came up to me and gave me a state invitation and I thought I’ll go and try out for the state 18s and that summer I did their academy and then made it to the state 18s team last year, and then I made it again this year as an overager so that was really exciting.

The talented footballer is hoping to remain in her home state with the Eagles and Dockers both viable options considering her breakout season and connection to both clubs with the youngster receiving text messages and calls from the rival clubs throughout the WAFL season.

“I think it’s great, I think it just shows that the game is developing so much and obviously it gives us girls in WA a lot more opportunity having two teams to be able to go to,” she said. “I was part of the West Coast Eagles Academy so I was training with those girls and signed girls every Tuesday throughout the season which was great, got feedback from the coaches constantly. “Freo have been the exact same, ringing me, checking up on me if I did get injured and they were always making sure everything was all good and I was looked after which has been amazing. Both clubs were very supportive.”

Despite going for the Eagles her whole life, O’Driscoll is open to the chance of either Western Australia side to pick her up and has been inspired by a host of AFLW players along the journey.

“AFLW is a bit different, I literally support everyone, Tayla Harris is probably my favourite player so there’s a bit of Carlton there but I love the Dockers in the AFLW,” she said. “Kara ‘Juddy’ [Donnellan], she’s the captain of the Dockers, she was my Swan Districts coach at my WAFL club, she’s just been amazing, calls me ‘champ’, will message me all the time. “Checks up on me and we just have that good kind of communication going so I’ll message her if I can’t come to training and things like that, yeah she’s been a really really great help.”

Having spent a large portion of her life playing netball the switch to footy was slightly challenging for the Western Australian with the sport posing a heap of new challenges physically and mentally.

“Most importantly my kicking, was the main thing I got told to work on, fitness-wise it would be the 2km, I haven’t been used to running that long distance you know, I’ve had a 30m court that I’ve had to run on instead of a big oval so they were the main things and feedback that I got back from the coaches,” she said.

Aware of her areas of improvement O’Driscoll has toiled away to address the issues in her game play to further develop her skills and become a commanding figure on the footy field.

“I definitely think I have been working harder this year, I think because last year was my first season I was kind of settling in and getting to know everyone whereas this year I know the game a lot better so being able to implement those things at training was a lot easier for me to do and I was more familiar with the coaches,” she said. “I think I am fitter, in terms of my 2km I’ve cut my time down which was one of my major goals, not comparing myself to other people and just trying to work on my own 2km time trial so that was good. In terms of kicking I’m getting there, slowly, but I think by having more exposure to the game I’ll be able to improve that a lot more.”

Gifted with the opportunity to play for and represent Western Australia, O’Driscoll has loved every moment taking on a leadership role of sorts and injecting herself into the footy culture.

“Oh it’s been amazing, probably one of the best experiences I’ve ever had,” she said. “I think the first year it was a lot different to obviously netball, so coming over and just the footy culture is fantastic and I’ve enjoyed every minute of playing in the State 18s with the girls and I think this year being older in that team has kind of allowed me to have a leadership role which I’ve really enjoyed so yeah it’s been great,” she said.

With the league expanding and the possibility of two clubs vying for her services the 19-year-old’s main aim is to get drafted and put her best foot forward highlighting her hard work and skill across the oval.

“I think I really just want to push myself and show that I have a really good work ethic and I’m willing to work as hard as I can and kind of step up to the level of AFLW,” she said.