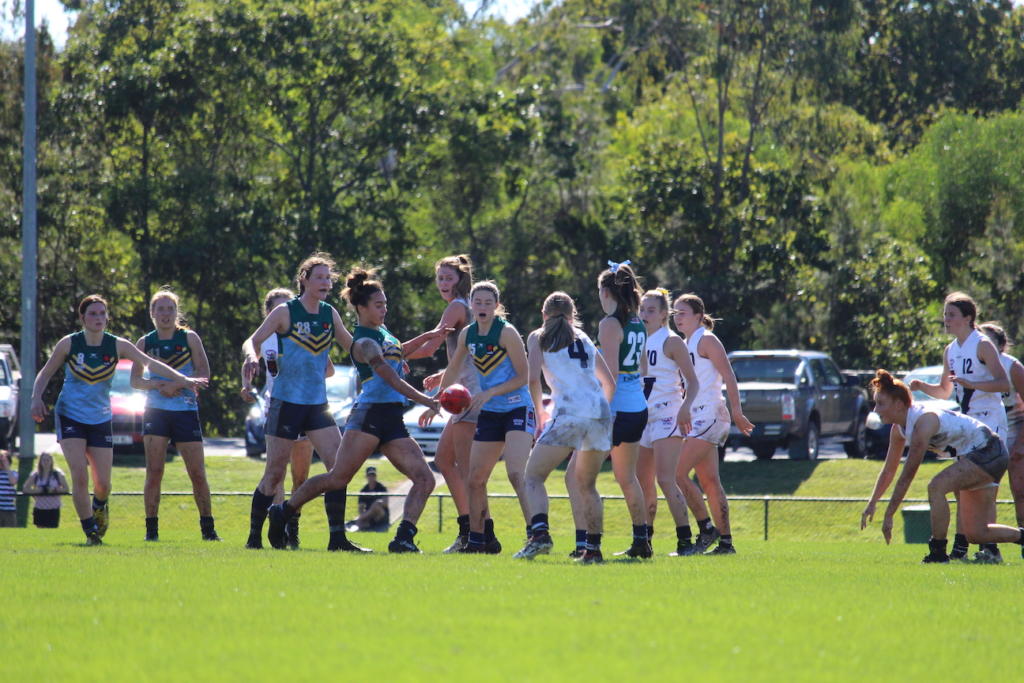 BRENNA Tarrant is no stranger to the limelight, earning herself a spot in the AFL Women’s Under-18 All-Australian side credit to her impressive season and ball winning ability – but she did not start off playing Australian rules football. Despite encouragement from her father, Tarrant did not follow in her father’s rugby footsteps, instead initially opting for netball and dancing.

“My dad used to play Union, he played first grade Union, and he sort of thought ‘oh, she can go play Union’,” Tarrant said. “I ended up playing netball and dancing and then sort of got into AFL and a lot of kids are going to AFL too because it’s sort of a safe option over the Union and League.”

Hailing from western Sydney, Tarrant was immersed in a heavy NRL (National Rugby League) and rugby union culture with only a handful of girls opting to pick up the footy. But that tune is slowly changing with more girls making the switch to Aussie rules.

“A lot of parents are cautious about ‘oh, I don’t want my child to get hurt, don’t want them to be injured’,” Tarrant said. “I think we still cop a lot of it, especially living in that Penrith area because that’s a really big Union/League area with the Penrith Panthers being so close, so I cop it a bit at school, so there is a bit of it around – a lot of that NRL sort of competitiveness. But it is coming through a lot, it’s been really good to see that rise in AFL,” she said.

Tarrant’s love for footy runs deep with this year marking her fifth season in the system after starting her journey with her local side Penrith-Emu Plaines at the bottom of the Blue Mountains.

“Played there in their inaugural team, played against one other club just for that season and then played with them in the first Western Sydney Under 15s team,” she said. “Then got onto the Under 15s New South Wales school team, came through the Rams team for the past three years now alongside some of the other stronger girls.”

Her development has seen her earn a spot in the Eastern Allies side with Tarrant enjoying the opportunity to play against some of the elite up and coming talent and hone her own craft on the footy field.

“It’s been phenomenal,” Tarrant said. “It’s definitely boosted my skills, playing alongside Tasmania and playing against Tasmania, all the coaching, it’s just been the best learning experience and playing with the best from two different states has definitely improved my skills and the skills of everyone else because we’re so united and we (bonded) really quickly as well.”

Having spent a large chunk of time playing in the defence end for netball, Tarrant has been able to transfer some of her skills onto the footy field, labelling marking as one of her strengths.

“I like to think that I’m a good marking target,” Tarrant said. “I used to do quite a bit of netball as a defensive player, I’ve only just started playing forward lately so I’ve worked a lot on my marking and getting down cleanly off the ground and that’s sort of a few good strengths of mine. “I like to think I’m a good tackler as well, run and carry is still one to work on, marking and (those) clean skills.”

Growing up in New South Wales, the 17-year-old models a lot of her play off the likes of Swans forward Isaac Heeney while also drawing inspiration from Christian Petracca and AFL Women’s player Alyce Parker.

“I played with Alyce for the last two years in Rams and Allies and she’s led the team really well, she’s been strong and her skills are really good too,” Tarrant said. “I just sort of looked up to her leadership and her skills.”

Tarrant seemed unfazed by the travel despite having to journey around the state to get to training and games.

“I have had to travel 45 minutes to get to training and then I’m sort of training on with the Giants’ team – that’s a bit of a trek out to Homebush from where I am. It is a little bit of a drive but it’s definitely not as far as some of the other girls who have to travel three-plus hours to get to training,” she said.

With commitments to the GIANTS, the defender is kept quite busy managing training schedules and is loving the opportunity to be surrounded by AFLW players.

“So a lot of them like Alicia Eva, Parker, Louise Stephenson are all around that training and they really get around all us new girls who have been invited into it. So we get a lot of help, encouragement and support from those girls and they really have helped us improve our skills,” Tarrant said.

Eva has had a huge influence on Tarrant given her coaching role as well as on-field impact, helping to guide her through the stages and further enhance her skills.

But like many aspiring footballers the the ultimate goal for Tarrant is to get drafted and play at the elite level whether it be in her home state or elsewhere.

“Getting drafted and playing for the GIANTS or any team would be probably my main goal,” she said.