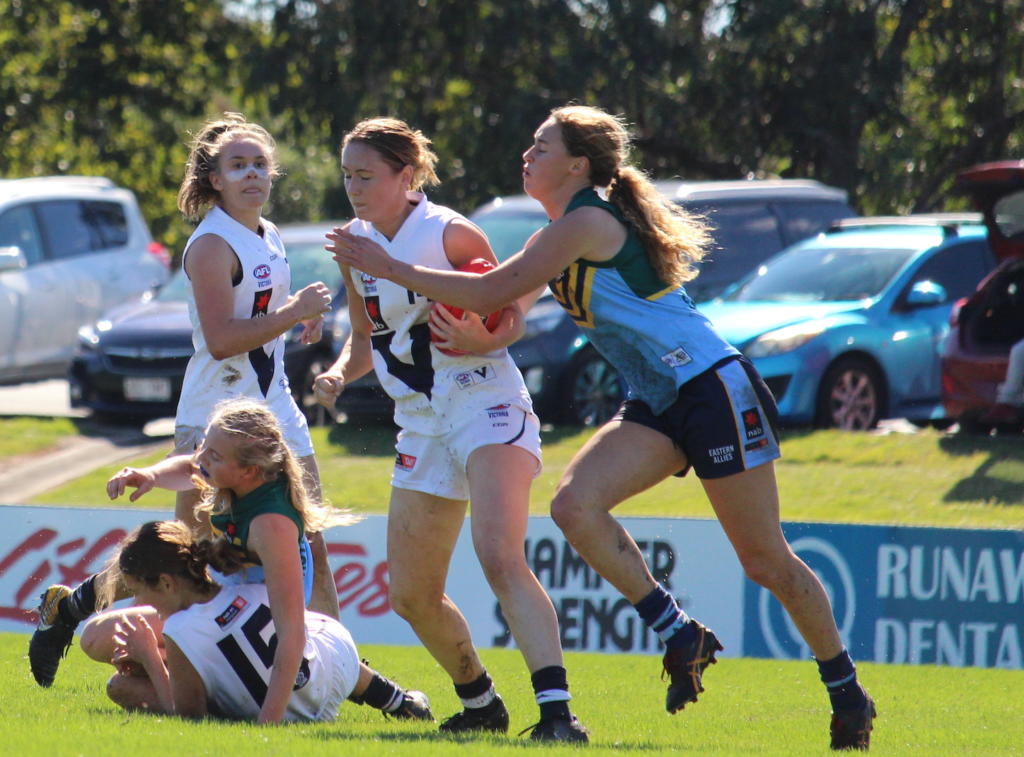 “STAND there and don’t touch the ball.”

They were the first words uttered to Geelong Falcons’ Abbey Chapman when she stepped onto a football ground for the first time. It might have been a bit abrupt and imposing had the words not come from a familiar face.

“My sister told me to stand there and don’t touch the ball so I just stood on the field and watch the ball roll past me,” Chapman said. “It’s probably not my favourite (moment), but my most memorable thing.”

Since standing there and not touching the ball on the field in her first game for Bell Park, Chapman has shot up the ranks, making it into the Geelong Falcons side and Vic Country. But it is the close bond between teammates that has kept her in the sport she loves.

“Just playing with all the girls, especially here at Falcons,” she said. “Everyone’s really nice and welcoming. “I just love playing with different girls and it’s just a great sport.”

The reliable defender admitted she was much more adept in defence, given it is where she has always played, and enjoyed.

“Mainly full-back because I guess that’s just where I mainly play, but obviously just the backline,” Chapman said. “(I’m) not good at kicking goals or anything so I stick to my backline.”

She has been working on being the best defensive player she can be, while also providing good rebound out of the back half. Chapman said her strengths vary, depending on the day.

“It kind of depends,” she said. “Because sometimes it can be my kick, I feel like I have a high and strong kick. “Sometimes marking, other days probably not, but yeah just a few things, not anything in particular. “(My improvements are) more sticking with my player. “I’m good at dropping back and going back to the square so I’m just going to try and work on sticking with my player and punching if my player is going to mark it, so just trying to stop my player from getting as much of the ball as I can.”

Chapman enjoys playing at any level and has been a reliable player inside the defensive 50, showing she has what it takes to match it with the best players from across the country.

“It’s always fun playing with a high quality of football so yeah looking forward to meeting heaps of new girls from other clubs and everything like that,” Chapman said.”

Her ultimate goal is to run out for an AFL Women’s side next year.

“Yeah if I can get there,” she said. “I’ll push myself as hard as I can and hopefully I can get to that level.”