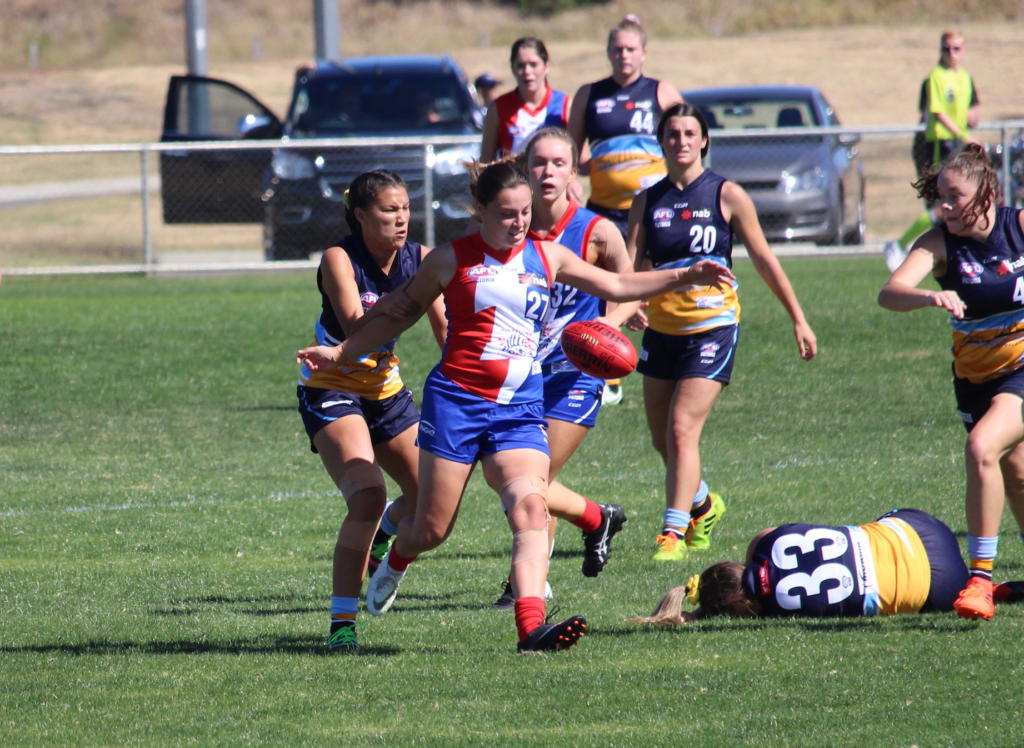 GIPPSLAND Power product Nikia Webber has high hopes for the future with the 18-year-old in her fourth season with the club and dreaming to get drafted in the near future if everything goes to plan. After telling us her footballing story growing up, she spoke prior to the NAB League Girls season about her dreams for the year ahead.

“By the end of the year I hope to get drafted, obviously that’s every girls dream. Just go hard, show the other teams what I have,” she said.

Webber has seen first-hand how far footy can take you with former teammate and Power captain Tyla Hanks playing with the Melbourne Demons in the AFLW. The crafty forward credits a lot of her development to Hanks and the influence she has had on her footy life.

“Yeah obviously playing alongside Tyla was a really good opportunity I learnt a lot from her and to see her actually killing it on the big stage as well is really good for her,” she said.

She has drawn the eye of plenty of people in the footy world getting a call up to the Vic Country squad at a young age due to her goal sense and ability to have an impact across the ground.

“It was a pretty good experience especially because I was 16 at the time so one of the bottom-agers and actually getting to run out wearing those colours was just the best thing that could happen,” she said.

Throughout her time with the Power, Webber has learnt a great deal of things with leadership one of the key elements of her development on the field.

“Just be a good leader for all those young ones that want to come through the program and actually lead by example for those younger girls in under 13s that actually want to make something out of this,” she said.

She has added some versatility to her game play making the switch down back when needed while also perfecting her craft up forward to ensure she has a continued influence on the scoreboard.

“Yeah I’ve always played forward but last year I actually played a bit of backline as well so that was a really big change,” she said. “I didn’t know anything about that position but one game the coach was like “oh you’ve got to go into the backline” so a bit nervous going into that. “But he said I did really well which was good.”

Webber has enjoyed the opportunity to mentor and foster the new up and coming players at Gippsland while soaking in the environment at the club over the past year, especially last season.

“All the new girls that came in you sort of just have to mentor them through the program because I’ve been there for so long,” Webber said. “It was a pretty cruisey year last year, it was really good actually. “A lot of the girls you wouldn’t think stand up did so it actually made the year pretty fun and enjoyable.”

Webber is aware there is still plenty she can improve on to become the best footballer she can be with aiming to go in harder at the contest and upping her work rate to have an impact at the coalface.

“Yeah the team improved massively, obviously I improved as well,” she said. “So the few years before that I didn’t really stand out wasn’t really going for the ball or anything was just sort of laid back but last year I actually felt like I was part of the team and could actually show my skills. “There’s a lot of things to get better on and obviously because no one is perfect so everything that you don’t think’s good during the season just work on that.”