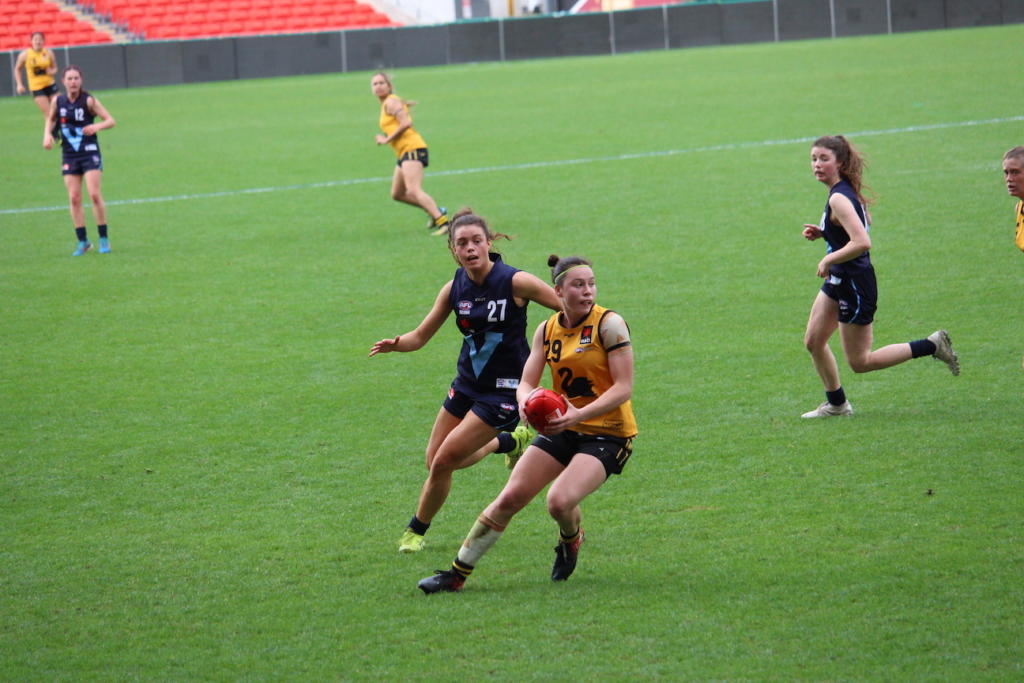 WITH a decorated highlight reel for her young age, it is no wonder Roxy Roux will be a key name in Western Australia heading into the 2019 AFL Women’s Draft. She spoke with Draft Central last year to tell of her remarkable journey, and what she had given up to get to where she is today.

The speedy 18-year-old has plenty to offer on the field, starting out as a junior and displaying a raw talent that has only blossomed with selection to AFLW Academies and AFLW Championships in recent years.

“From the first year I started in under 18s to where I am now, there’s a big improvement, I’ve really worked hard and everyone has supported me through my journey through here,” Roux said. “From there it all just kind of started looking up and linking together, so being able to train with the Dockers and West Coast Academy and then got straight into our under 18s, the WAFLW season and whatnot, it’s all just coming together at the moment and I’m really excited for what’s in the future.”

Like many young up-and-comers, Roux has had plenty of communication with clubs in her nominated zone of home state Western Australia, with both West Coast and Fremantle showing interest in the versatile speedster ahead of the 2019 Draft.

“I have nominated for WA, so super excited for that, that we have two teams this year,” she said. “Look, I’m happy for anyone that picks me and I really just want to play football. “Being in the West Coast Academy there was a lot of communication there, talking through training and whatnot, and being a part of Freo’s training, being able to get around the club, not so much the communication about draft but being able to experience what it’s like to be in a club and the club culture there is amazing. “The girls are so encouraging and just really kind and helped us out a lot, so I’m really, really excited to see where the draft takes me.”

The forward utility provides a spark on field, able to rotate through as an undersize ruck when required credit to her vertical leap and ability to find the ball. Roux says that while she has a key physical strength in her aerial ability, she wants to work on her endurance on the field to go longer distances when required.

“Preferred I guess is ruck but you know, being an undersize ruckman in a competition where you’re going up against girls about 20cm taller than you, probably not gonna happen! “Being forward or being in that kind of ruck situation in the forward that’s gotta be my favourite, being able to get up in the air,” she said. “I love just being able to get up into the air and help my team out, it’s better than kicking a goal, being able to tap that ball straight down, I’m happy running off the wing and straight into our forward 50.”

While Roux said she does not have one singular inspiration for her desire to go far in the sport, she has the support of her family and competitiveness of her siblings to thank for where she has gotten on her journey so far.

“I haven’t put much thought to that (inspiration) because my family help me a lot, I haven’t really looked at anyone in AFL, AFLW and gone ‘wow like you’ve really inspired me’ and don’t get me wrong a lot of people have but it’s kind of just been a journey at the moment, not so much focusing on myself but focusing on getting to where I am today, its been just years in the making,” Roux said. “I remember my mother looking at me after I was told that I couldn’t play boys footy anymore and she just said ‘well if you want to play footy at the highest level we’ll get you there, if you have to play for the men then we’re gonna get you there’ and then about a year after that comment was made the women’s league came in.”

Roux has been compared to AFL Women’s star Tayla Harris in recent years, proving the hype around her even in the Under-18s competition is well-deserved.

“My family keeps me pretty grounded, I don’t really like to compare myself to Tayla Harris because I know I have been – I definitely can’t do that fantastic scissor kick so that’s one of the reasons I don’t compare myself to her,” she said. “I’d like to rather compare myself to my eldest two brothers, Ross Roux and Dylan Roux. “If you’ve got tapes of them and myself, put us all together and the kicking style is the same even though Dylan’s a left-booter, you know, kicking style, running style, everything – we do everything almost the same.”

With a good head on her shoulders and plenty of family support despite making the move to Perth to be closer to the football action, Roux said there is still plenty of competition in the Roux household.

“There was I think one argument we all got into where my brothers were like ‘well I’m the greatest footballer in the house’ and then mum just goes ‘look at your sister, she’s in states!’, so that kind of shut them up real quickly,” Roux said. “But no, they’ve really helped me develop my skills, so I credit my brother Dylan for my jumping skills, I mean we used to play games literally just based around rucking, and he was a few years older than me so he had that height and he was going through growth spurts so having about four foot on me going up against my brother,” Roux said. “Both of them have really helped me, Ross with my skills and my younger brother he likes to try keep me humble, it’s really just a family effort that helps me deal with the pressure.”