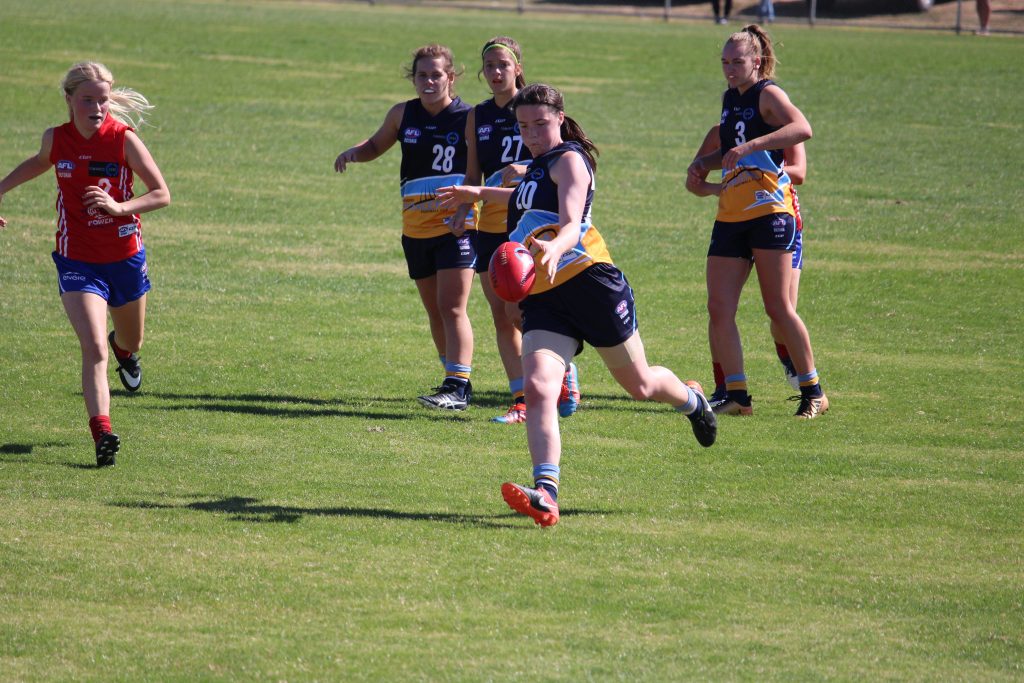 AIMING to just improve and develop her game regardless of her future post-AFL Women’s Draft next week, Bendigo Pioneers’ Kate Douglass is a player who has always been in and around football and that is not likely to change any time soon.

“I started off just kicking with my dad and brother because my brother played a lot of footy and dad played a lot footy growing up,” Douglass said. “Then I was asked to go into the South Bendigo girl’s team and from there I was also asked to join the Bendigo Pioneers and that really pushed my footy journey into (playing) some really high-grade footy games. “Then I was able to try-out with the Vic Country team, look at all those amazing players and play with them.”

Douglass has become a main-stay in the Bendigo Pioneers side over the last couple of years, predominantly in defence, where she shutdown opposition forwards deep under pressure. Being under pressure against an opponent is something Douglass thrives on and could offer at the elite level.

“I did a lot with the kick-outs in the backline and I felt that I was able to push the ball past the 50 to get to really push it into the forward line so I was really happy with that,” Douglass said. “I’d like to say I did well in the defensive one-on-ones because I do love that competitive tussle in footy.”

Douglass knew as a top-age player this year, she would have to be more vocal in such a young side and direct the defenders ahead of her.

“I really think communication is an important thing,” Douglass said. “I am quite shy but I do try my best to speak out loud and… allow the girls to see what I can see because I’m at full back, so I can tell them what’s on their left or right. “Also, being able to push the ball out when it’s in contested areas to get it out and make sure it keeps going.”

Since the NAB League Girls season finished, Douglass took the opportunity to run out with Williamstown in the Victorian Football League (VFL) Women’s competition, a chance she relished.

“That was amazing,” Douglass said. “It definitely took me a while to (take) it all in because it was much more aggressive and so much more competitive but I’ve really loved playing against those (more mature) girls because it really pushed my strengths and showed my weaknesses and what I can improve on, which was really good. “It was about a two-hour drive up (to Williamstown) which was hard sometimes but I quite enjoyed it because I was able to have a break from school and just sit in the car with my mum and just listen to music so it was not too bad.”

While the travel has certainly been a big factor in her career, Douglass knew there was no way she could travel to the various venues for her sporting love without the support of her parents.

“Definitely the first big one (inspiration) was my family because they pushed me to be who I am today and they really inspire me to keep going with everything that I can do,” Douglass said. “But I’ve got to say for Vic Country and Williamstown all the girls from the teams really inspired me because they were so much more experienced and I was able to learn off them. “And then definitely the coaches from both sides, they got me to see what I was actually capable of and what I could improve which was again a really good new experience for me to see that come forward.”

Running out for the Seagulls, Douglass said she was excited about sharing the relatively unknown forward line alongside veteran goal kicker, Mo Hope who was representing the blue and gold this year.

“I got to play a couple of games with Mo Hope, which really opened my eyes and it was really good because she talked to me about positioning myself in certain areas when I was in the forward line, because I (played) a bit in the forward line at Williamstown which was definitely new for me because I played back all my life,” Douglass said. “But she really got me to try new things in the forward line and push myself to lead and be confident with my ability.”

Douglass said she was keen to take the next step up into AFL Women’s and did not have a preference where she went, but she knows if she is not to be picked, it is not the be-all and end-all.

“I’m honestly not really fussed because I think it would be amazing if I got to that level,” Douglass said. “I do support Essendon Bombers which would be great if there was a team but honestly I’m not fussed because I think any team would be amazing. “I’m just really trying to focus on continuing my improvement with footy and learning and all those new experiences because I haven’t had a lot of elite exposure and when I got to Williamstown and Vic Country, that really opened my eyes. “So just continuing down that path wherever it will lead me so I can learn more is really all I’m looking forward to.”