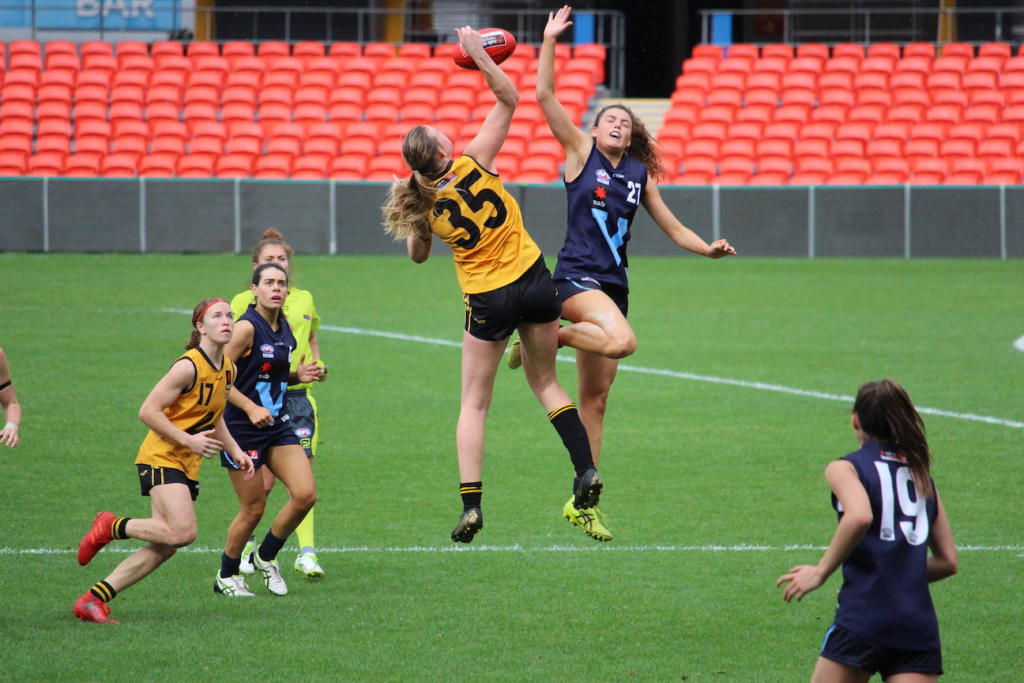 FROM Exmouth, a small country town in Western Australia (WA), Mim Strom has become one of WA’s biggest prospects ahead of the draft. With limited opportunities to pursue her footy dreams in Exmouth, Strom was forced to the sidelines but that did not stop her returning to the game bigger and stronger given her commanding height and ruck craft.

“I played a little bit in the junior league but I had to stop after Year 7 because they said girls aren’t allowed to play in the older one, so I stopped for about two or three years,” Strom said. “I wanted to train with the boys because I missed it so much and then my dad stormed down and said ‘my daughter is going to play’ and then I ended up playing a year before I came down here. “Then came down to Perth for more sporting opportunities and yeah it’s been a bit of a whirlwind but I’m very excited to see what happens.”

Strom made the decision to move down to Perth in hope to enable her footy dreams while also nominating WA as her place of choice for the upcoming draft.

“I’ve actually moved down to Perth now to be closer, but yeah I do miss home a bit because that’s a bit of a trek,” she said.

Despite missing home, Strom has been able to focus on her craft and although she was not always been this tall and able to play ruck, her rapid growth spirt gifted her with the opportunity to switch it up from her usual position.

“My height I guess, really my ability to follow up around the ground I think I pride myself on, I didn’t used to be this tall so I used to be a rover,” she said. “So now that I’m tall enough to be a ruck I feel like once I’ve tapped that ball I’m going after that ball like anyone else and playing that role.”

Given her height, Strom has noted a few areas she wants to improve on such as her marking and ability to impact the contest going forward.

“Probably my pack marking, just getting a bit stronger crashing those packs and being that tall option, obviously I’m pretty young but I think that will come with experience hopefully,” she said.

Getting the opportunity to play for Western Australia meant a lot for Strom who valued the chance to represent her state and develop strong connections with her teammates.

“It was amazing to represent WA, it’s such a great team and just the values that we had really brought the team together and I think we did well,” Strom said. “Would’ve liked to do a bit better, but it was just about the experience and the culture was really great.”

Playing with the Swan Districts in the West Australian Women’s Football League (WAWFL), Strom has been subjected to some highly talented footballers and exciting occasions such as the grand final.

“Favourite memory – probably playing – well, for Swan Districts we made the grand final, unfortunately we lost but just playing in front of so many people we had a great crowd that day so the finals were pretty cool,” she said.

Swan Districts coach and captain, Kara Donnellan has proven to be a huge inspiration for the aspiring footballer with her off field leadership just as influential as her on field guidance.

“I’d have to say my coach at Swan Districts, Kara Donnellan, she’s been amazing,” Strom said. “She’s the captain of the Dockers team and just her experience and her wisdom and obviously she’s coaching at Swan Districts and won an award recently, it just shows how good of a coach she is and I’ve learnt so much from her. “She’s not only an amazing player but her leadership on and off the field is inspirational.”

Strom has had a busy 2019 well and truly announced herself ahead of the upcoming draft with the 18-year-old showcasing her development throughout the year and willingness to take up the challenge regardless of the level or situation.