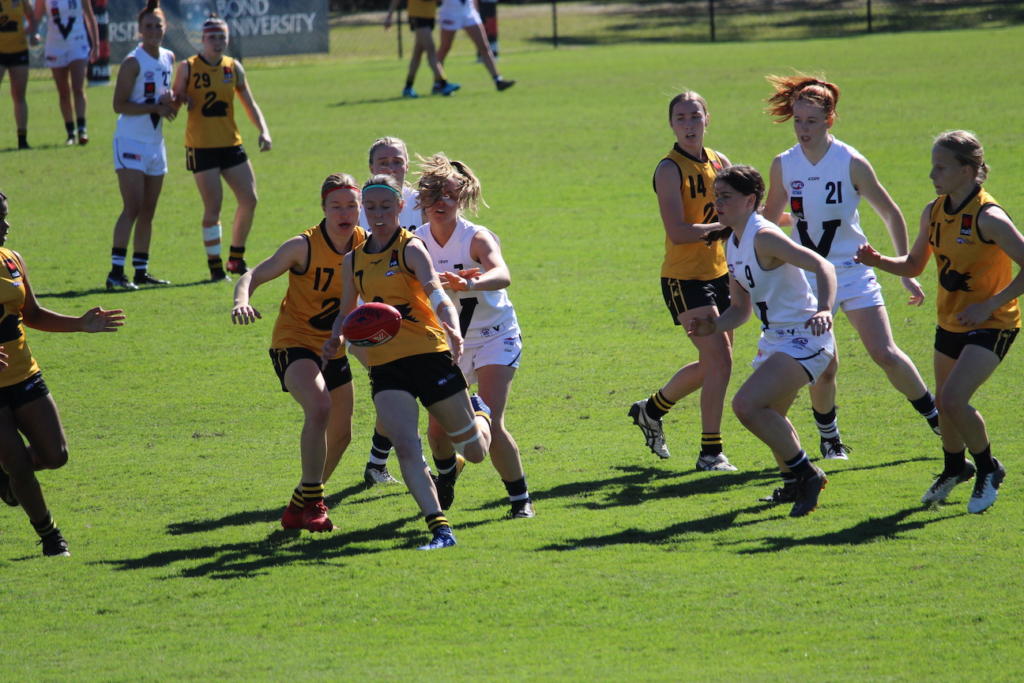 AFTER experiencing the AFL Women’s Under-18 Championships as a bottom-ager last year, West Australian Taylor Pescud has used the experience of returning in her top-age year to enjoy the moments along the way.

“I definitely enjoyed it (this year) a lot more and I felt a lot more confident how to play and how to plan who I’m versing so I definitely think it’s benefited me and I’m having a lot more fun this time around as well because I’m less stressed and the team’s vibing a lot better and I’m really loving it,” Pescud said.

While it had been just 12 months between her first and most recent championships, Pescud said she had worked on areas of her game, determined to make it as far in the Australian rules football pathway as she could.

“Probably my skills (I’ve improved on),” she said. “I came to footy quite late and that’s kind of the part of my game that really needed improving. So I’ve worked really hard on my skills and I’ve always had the competitiveness, so just my basic kicking and I think that’s really starting to show.”

Pescud has played state league football in between, an experience she said bodes well with the Under-18 Championships because of the different styles and bodies being thrown around at the two levels.

“I think I slide in pretty well,” Pescud said. “I think the state league prepares you well for the 18s and vice-versa and I think coming here it’s a lot quicker but there’s a lot bigger bodies, so there’s different ways to prepare but I definitely think they both compliment each other really well.”

Not a noted goalkicker – self-admittedly it was “not her thing” – Pescud instead focuses on areas she can impact a contest, which is on the inside with her defensive work, outmuscling and outsmarting her opponents.

“My contested work in the way that I read the footy coming in,” Pescud said. “I’ve watched so much of the game that when it’s coming in and I’m just one-on-one with my player that’s where I do my best work as opposed to kicking a goal. “That’s not really my thing, but definitely the contested work I really enjoy and I really thrive off that.”

Pescud has also never had to look too far for an inspiration given her coach at Swan Districts.

“Definitely my club coach and the Fremantle captain Kara Donnellan,” Pescud said. “She’s really supportive of the young girls. “She pushed me to go up to League a year early and I think that really did wonders for my game and I think that’s shown in the carnival and last year. “It really helped me improve quicker and learn a lot more about the game so definitely and the way she plays she’s hard at the football and so consistent so I really strive to be like her.”

Now after a successful couple of seasons and a big rise from the amateurs league to the big time, Pescud is just one step away from making the elite level. But she is not getting too far ahead of herself, knowing she has time on her side.

“Obviously I’d love to get drafted and it’s a big year this year but I just want to play my best footy at the carnival and my footy speaks for itself and I can get there in the end,” Pescud said.