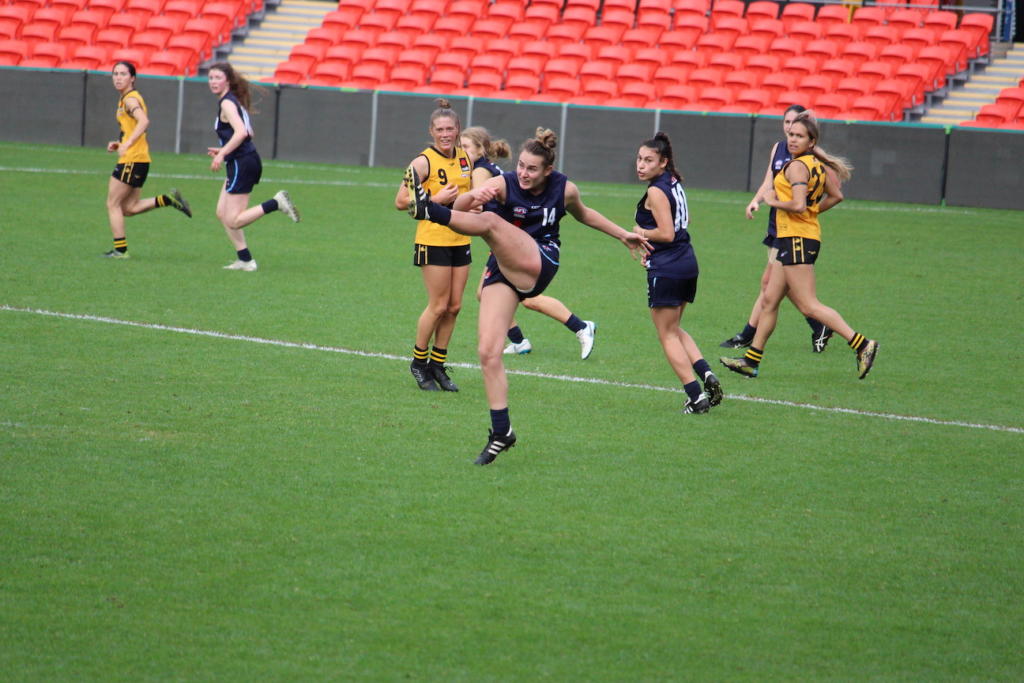 A LETTER from the Eastern Ranges kick-started future club captain Laura McClelland’s footy journey, with the club inviting her to come down and try out before blowing staff away and earning herself a spot in the team.

She first picked up a footy when she was eight, inspired by the likes of her brother and best friend, both of whom always had a passion for football.

“My brother played when he was younger,” McClelland said. “I kind of just wanted to be like him so I just got into it from him and one of my best friends was playing and she convinced me to go up to the local club.”

McClelland has a big bag of tricks, able to play anywhere across the field and have an impact credit to her footy nous.

“I don’t really mind (where I play),” McClelland said. “I’ve played a lot forward for Eastern so I think I’ve become adapt to that craft, so I like playing forward. “But I’m also used to the backline from local so either’s fine, there’s no preferred.”

Coming into her top-age year and rewarded with the captaincy, McClelland has taken it all in her stride standing up to the challenge time and time again and backing herself to perform even when under pressure.

“Being captain of Eastern Ranges, obviously there’s a lot more pressure put on you, but it’s just something you have to take with a grain of salt and just push through and lift everyone around you,” she said. “With pressure comes responsibility so you just have to take it on.”

McClelland took her side to the preliminary final this year despite losing a host of top-end talent last year with the captain praising the young side after falling short against the Northern Knights in the final.

“It was exciting,” she said. “But heartbreaking to just lose it in the end. “But they were the top team all year and they probably deserved it but it was a lot of fun and exciting and it was a great opportunity to play like that, probably our best game for the year.”

Despite all the accolades – having made it to the finals, being named in the All-Australian Team and the Vic Metro team – McClelland still has areas she wants to improve on.

“Probably my right foot kicking as I’m a left footer, so just working on that,” McClelland said. “I’d like to work on just my endurance just so I can run out full games and get my marking all right and so I can really showcase what I have to offer.”

The nod in the All-Australian Team was a surprise for the Eastern captain who was flattered to be selected.

“That was an honour,” McClelland. “Don’t think I was really expecting it, but it was a pleasure to be in and to be around all the great players that were playing, it was just an honour.”

When asked to define her favourite football momen,t McClelland could not just cut it down to one with the Ranges captain attributing that winning feeling as one of the most special things about footy.

Over time, McClelland has witnessed first-hand the evolution of women’s footy, from being one of the first girls to play for the Ranges to the steady growth and expansion of AFLW.

“It’s amazing. I’ve played since I was eight, so how it’s expanded and the growth it’s gone through, it’s amazing and I’m just excited for the new generation of girls to come through and make it even better,” she said.

One of her biggest inspirations throughout her footy journey so far has been none other than Daisy Pearce, with the AFLW Melbourne star paving a way for all future women footballers.

“Daisy Pearce is a phenomenal player, she’s an inspiration to so many young girls and I guess I aspire to be someone like her when I’m older,” she said.