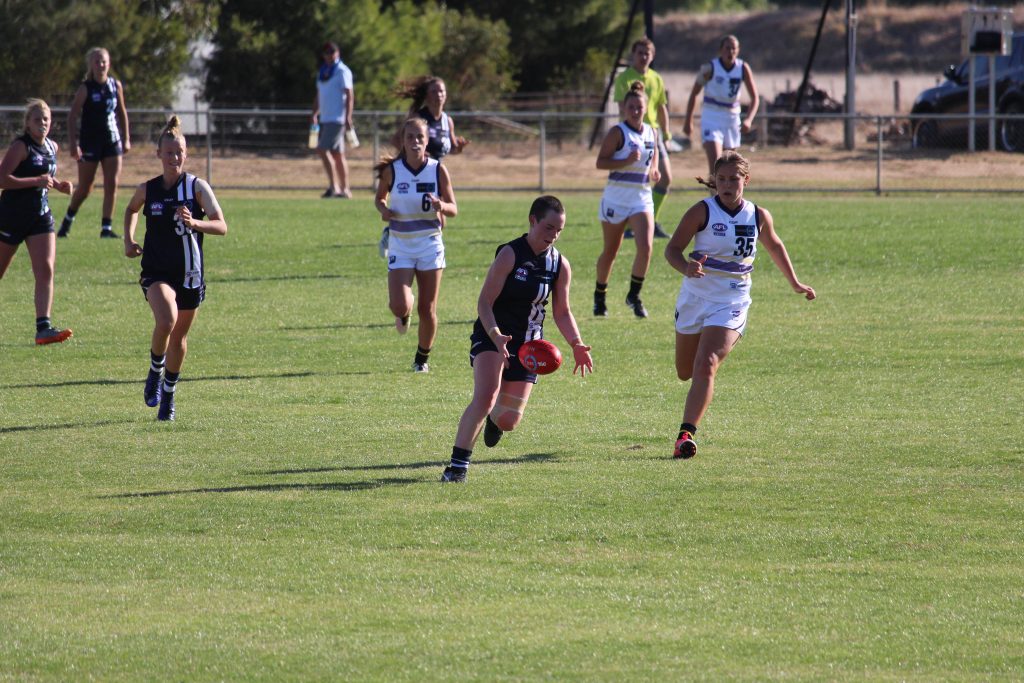 BY her own admission, Luka Lesosky-Hay has felt very lucky. The balanced midfielder has followed the women’s football pathway at the right time, moving through the system as it continually grew, picking up a premiership with the Geelong Falcons, earning Vic Country representation, and playing Victorian Football League Women’s (VFLW) for the Geelong Cats. Now Lesosky-Hay hopes she has another chapter to add at the AFL Women’s Draft.

“I started playing when I was eight-years-old,” Lesosky-Hay said. “In my hometown in Aireys (Inlet) there was a team and I was friends with lots of the boys when I was younger, so I sort of just wanted to play. “I guess I’ve sort of kept going and was playing with the boys for a while and while I’d been playing the women’s footy kept developing and I was lucky enough to get picked up by Falcons really early on and stay with them for the last three years. “Then get to do Vic Country and then with the VFL and as I said, I feel like it’s just kept progressing as I’ve been playing so I’ve been really lucky to keep going through it all.”

Her NAB League Girls season where she averaged 19.5 disposals, 2.2 marks, 2.5 inside 50s and 5.0 tackles from 10 games saw the top-age player earn a Vic Country spot to travel up to the Gold Coast for the AFL Women’s Under-18 Championships.

“It was massive because I really, really wanted it and I was super happy to get to go up to Queensland was pretty awesome,” Lesosky-Hay said. “It was also a big wake up as to how high the standard is. “I’d been playing in NAB League which is obviously a high standard but then taking it to the next level and seeing how many really, really good players there were was pretty awesome and eye-opening.”

Upon return, Lesosky-Hay also got a taste of senior football, running out for the Cats on three occasions, showing her defensive pressure with an averaged of 5.7 tackles per game to accompany her 8.7 disposals. She said it was very different to playing at Under 18s level.

“Bigger bodies, so it was also really nerve-wracking starting it all,” Lesosky-Hay said. “But they were super supportive and it was a different style of game I feel like, but also more exciting again because it’s taking it to another level where you take it against people who have been playing for even longer or who are bigger than you and so you had to really step up and I think that was really cool.”

Her season across the multiple competitions earned her enough interest from recruiters for a National Draft Combine invitation, something she said she was surprised with, not that being surprised was surprising anymore with the opportunities that were presented to her throughout her career.

“Pretty amazing,” Lesosky-Hay said of the combine invitation. “I mean I sort of with everything I keep getting really surprised and grateful for the new opportunities and this sort of stuff and I’m hoping to get the most out of this week as I can, and it’s also awesome seeing everyone from nationals again and it’s really cool.”

Lesosky-Hay has always been a dedicated worker and is determined to continue building her strengths, and improving the deficiencies in her game.

“I’m quite strong in one-on-ones contest as I play inside mid a lot,” she said. “My strength over the ball and clean hands when I’m picking it up and when I get my opportunity, my kick is generally pretty accurate and long. “I want to keep improving on my confidence and knowing how much time and space I have so I can take the game on a little bit more and also building on my repeat running and get as fit as I possibly can and keep going.”

Having had brief chats with various recruiters throughout her time, Lesosky-Hay admitted there were no guarantees when it came to the draft, and it prompted her to nominate all of Victoria for the upcoming AFL Women’s Draft, rather than just Geelong.

“They (recruiters) basically all have to say is that they can’t say anything for sure because it’s such a crazy thing on the day as well with people getting picked from everywhere, so you can’t really know at all,” Lesosky-Hay said. “I went for Vic because I personally want to come up to Melbourne as well and leave down from home as well so I thought I’d give myself the best opportunity as well to have a wider spectrum of clubs to be able to look at me. “So I went all of Victoria.”

It is not just an on-field decision to potentially move to Melbourne, but one for her future career.

“I’d love to do uni up there (in Melbourne),” Lesosky-Hay said. “Probably not straight away, but I want to study art and lots of really great art schools are in Melbourne, so if I do study it I will definitely be coming up to Melbourne.”

Lesosky-Hay said she had plenty of role models over the journey, and while many have those who have forged the path to the AFL Women’s competition, the Geelong midfielder said it was anyone involved in her journey.

“I guess it’s been hard because at the start when I was playing there wasn’t really women football players, so I guess I looked up to my teammates and now again with role models coming up,” she said. “I love the game style of people like Ellie Blackburn who I’ve watched the last few years. “But to be honest my role models have been the people around me as we’ve all been going through it and experiencing it as it comes.”