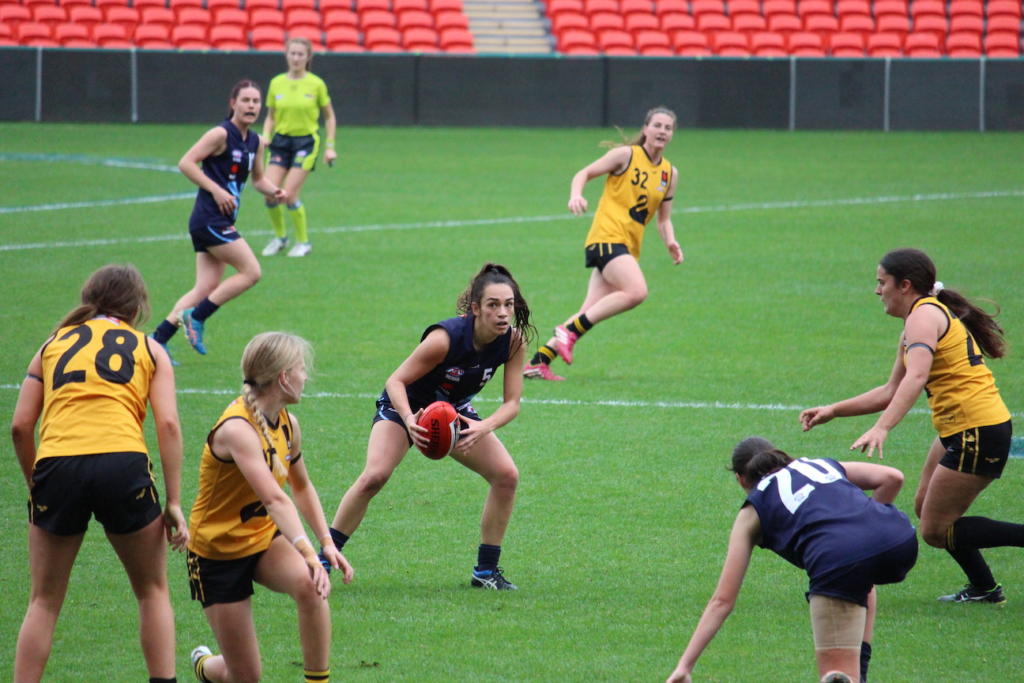 IT is hard to imagine that a player who won their club’s best and fairest award in their bottom-age year could surprise you in their top-age one, but for Western Jets’ captain Elisabeth Georgostathis, she has gone to another level in 2019. Her numbers, influence, opportunities and testing show just that, with the tireless midfielder turned utility leaving no stone unturned in her goal to reach the AFL Women’s competition. But her journey all began down at St Albans.

“I saw my brothers playing, I started at a local club at East Keilor but they didn’t have enough girls,” Georgostathis said. “One of the coaches told me to come down to St Albans, started with them, changed to Spurs and then just got picked up by the Western Jets and started playing that.”

For Georgostathis, she could not have landed in a better place, praising the Jets for their development and social atmosphere around the club.

“It’s been so good,” she said. “Western Jets and just local, they’re both great experiences and I’ve loved playing with both of them, making new friends and learning new skills, it’s been really good.”

When the tough inside midfielder with the tackling presence was named the 2017 Western Jets Best and Fairest winner, she could hardly believe it herself.

“It was really good,” Georgostathis said. “Like I was surprised because we’ve got a lot of good girls in our team and it was just amazing.”

From there, she was named captain by her peers, an opportunity she said she was “grateful” for, and “really happy” that she was chosen as their leader. When you understand her mindset and strengths, it is no surprise she is a natural-born leader. When asked what she prided her game on, it was pretty simple.

“Just run hard and work hard, put all my effort in the whole game,” Georgostathis said. “If I get tired I know I can swap, go on the bench, have my rest and come back on hard and more determined.”

If there was a clear improvement for Georgostathis in 2019, it was to improve her kicking, which she admitted at the NAB League Fitness Testing Day was a real focus.

“(I want to improve) my kicking on the run,” she said. “Sometimes it just goes a bit off target and just trying to pinpoint that kick.”

At the same event, Georgostathis was just hoping to be picked up by a Victorian Football League Women’s (VFLW) side and put her best foot forward to play in the AFL Women’s competition next year. She ticked the first box, playing for Western Bulldogs and having a key role at half-forward and through the midfield on the pressure-cooker stage of finals. Now the second box is waiting to be ticked.

After a sensational season where she was one of Vic Metro’s best at the AFL Women’s Under-18 Championships – having been named emergency the year before – Georgostathis added more strings to her bow than just about any player, becoming a real standout off half-back for the Jets, before spending time forward for the Bulldogs. Now with the AFL Women’s Draft just a couple of weeks away, the tenacious onballer could be edging ever so close to her dream of playing at the elite level.