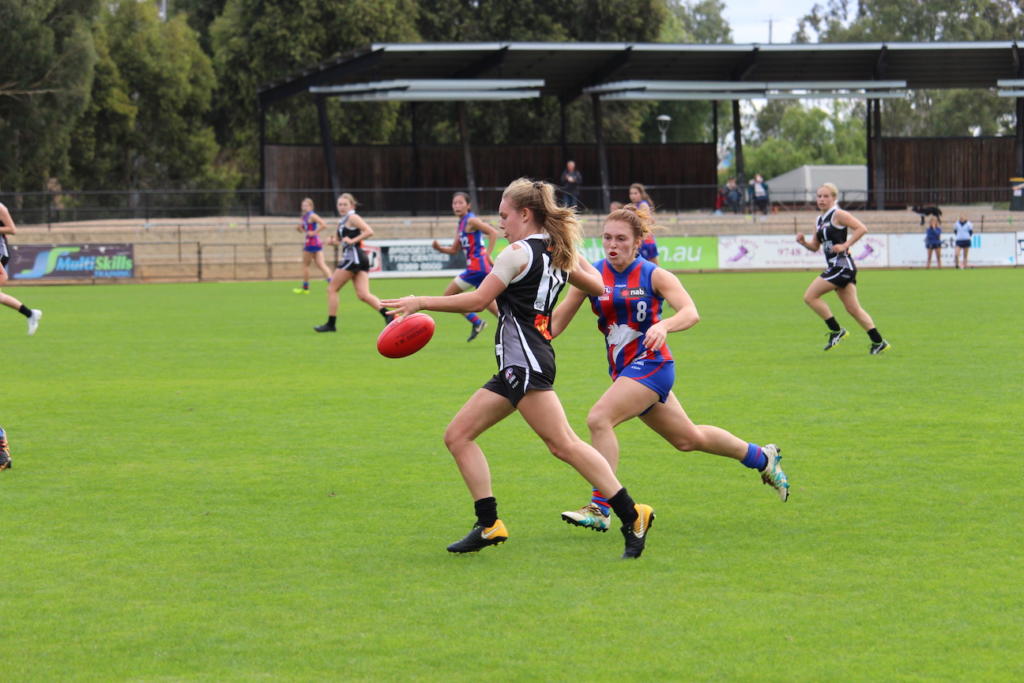 AFTER missing out on the AFL Women’s Under-18 Championships last year due to injury, Greater Western Victoria (GWV) Rebels’ Ella Wood was not going to let anything stop her missing her top-age championships. The tough inside midfielder earned her place in Vic Country’s side for the championships following a NAB League Girls season where she averaged 13.5 disposals and 2.4 tackles from eight games at the Rebels. Playing all three matches up on the Gold Coast, Wood had the six touches per game and 3.7 tackles, not afraid to throw herself into contests, something she has become renowned for. But her journey has been much longer than just 18 months.

“I started about 12 years ago playing Auskick, I went to one of my brother’s games and it looked like heaps of fun and it was different to all the other girls and I just wanted to be more involved,” Wood said.

Wood has plenty to love about the game she plays, but also the team she plays for, admitting at the NAB League Fitness Testing Day in the pre-season that the Rebels were a great group to be involved with at junior level.

“Probably the team work and having people there to encourage you and get you step up more and being part of the team is just wonderful,” Wood said. “The communication we (Rebels) have with everyone and the bond. “All us girls we all get along and the coaches are really supportive as well so it brings us all together.”

In the pre-season, Wood hoped to step up into the leadership role she had and grow her confidence as the season went on, assisting close friend and captain Sophie Molan.

“I’ve been picked in the leadership team this year for the Rebels and I hope this is my chance to step up and show what kind of leader I am and what I can actually do,” Wood said.

While Wood was unable to play finals in the NAB League Girls competition, the Rebels’ midfielder and Molan both helped the Western Bulldogs reach a Victorian Football League Women’s (VFLW) Grand Final. Ultimately going down to Collingwood in the decider, Wood showed she could hold her own against bigger bodies and was just as fierce with her tackling on the day. Throughout the VFLW season where Wood managed seven games, she averaged 4.1 tackles to go with her 6.7 disposals, often named as the 23rd player or rotating in multiple positions.

With the football done and dusted, and Wood earning a National Draft Combine invitation and completing that phase of her year, now it is a waiting game to see if the uncompromising hard-edged inside midfielder can land at an AFL Women’s club for 2020.