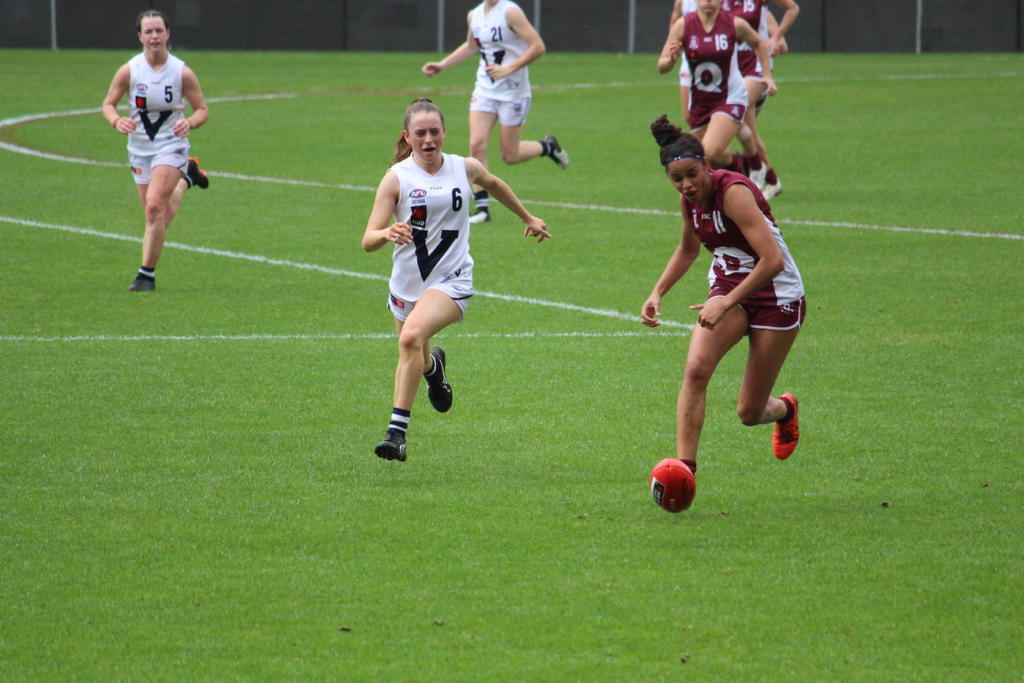 COMING from a touch footy and track and field background, Tiarna Ahwang has well and truly found her feet within the Australian rules football system. Despite being a latecomer to footy, Ahwang has not taken a backwards step capitalising on every opportunity that has come her way.

“I didn’t start off with AFL, I started off with track and field,” Ahwang said. “So when I was young I was always in the jumps but I did all the events because I loved sport. Then when I got to like year seven and high school it was more touch footy and then in 2014 AFL.”

Inspired by a close friend, Ahwang was introduced to Australian rules football and decided to give the sport a shot despite her father playing it when he was younger.

“One of my good mates that is older, she has kids and stuff I went and watched one of her partners games and I was like ‘this is a cool game, do women play?’ Then I went and saw her game and it was really good and she got me into that and then I started representing all the NQ (North Queensland) and started making Peninsula and Queensland,” she said.

Overawed by the endless opportunities footy had to offer, Ahwang decided to dedicate her time to perfecting her craft and focus more solely on her footy hopes.

“Then I was like this sport is really good it’s taking me somewhere, whereas the other sports it takes a while to get there,” she said. “So then I kind of stopped doing all the other trainings and started to focus more on AFL and just left touch footy,” she said. “I’m focused more on footy and trying to get drafted by the end of the year.”

There are plenty of similarities that can be drawn between touch footy, track and field and footy given the free running and tackling nature making the transition between the sports relatively easier for the developing footballer.

“Track and field I love my running that’s one wing position because I love to run,” Ahwang said. “With touch footy all you do is step and like it’s a fast play. Whereas AFL there’s a lot of kicking, there’s more space, there’s more running to do.”

Before meeting former Brisbane Lions and now Richmond full-forward Sabrina Frederick-Traub, Ahwang did not have an AFL Women’s inspiration or know a lot about the football pathways available.

With a new inspiration on the field, Ahwang attributes a lot of her drive and support to her parents in particular her father who encouraged her to pursue her dreams while also crediting her coaches and staff at North Queensland for her progress.

“Mainly just my parents and all the NQ people, I still miss all my coaches up there that actually got me to where I am today at the Gold Coast,” she said. “If it wasn’t for my parents I wouldn’t be where I was today. It’s mainly my dad because he played AFL when he was like 13 years old and then he switched to rugby. “He [dad] just wants me to focus on footy and try and get drafted end of year and if that doesn’t happen still continue and wait for the next year and just progress on my footy.”

The 18-year-old has almost started a new trend in her family with fellow family members bucking the trend and picking up the footy instead of a rugby ball.

“So it’s a bit funny no one in my family, all my mums brothers they don’t play AFL – no one does,” Ahwang said. “But now I’ve seen since I’ve moved, I moved six months [ago] from Cairns to the Gold Coast I see my little cousins play AFL. “I’m like wow someone’s actually playing AFL in my family besides my dad when he was young.”

She made the difficult move down south from Cairns to Gold Coast leaving her family and life to pursue her footy dreams but the confident 18-year-old is happy she took the leap of faith.

“Like ever since I’ve moved there’s been way more training and like more intensity and I enjoy it more because there’s more people at my level,” Ahwang said. “In the NQ there’s not much like opportunities there. “As soon as I finished school there, one of my good coaches Jason Torney got me moving here and then once I got into everything it was just so enjoyable. “Like I didn’t want to go back home but then my parents were like you’ve got to come back home soon, like we miss you, we need you back. “It’s so good here I love it.”

Ahwang has a wealth of talents and uses her various sporting backgrounds as a backbone in her footy to have an impact across the field.

“So my strengths as a wing player, I like to run,” she said. “But in nice weather like someone will kick out wide and I’ll just run to the footy and just take it on and get it going. “My height, because I’m pretty tall as an 18-year-old when someone kicks the ball I like to jump on top of people and I just love it.”

She still has plenty of development left in her with the youngster highlighting her endurance and inability to adapt to the weather conditions as a couple of areas she wants to work on in hope to get drafted in the near future.

“I’m from the north so it’s mainly sunny but now coming here there is rain so I kind of have to adjust to that,” Ahwang said. “But other than that it’s mainly just work rate, like I’m pretty fit but you have to be really fit.”