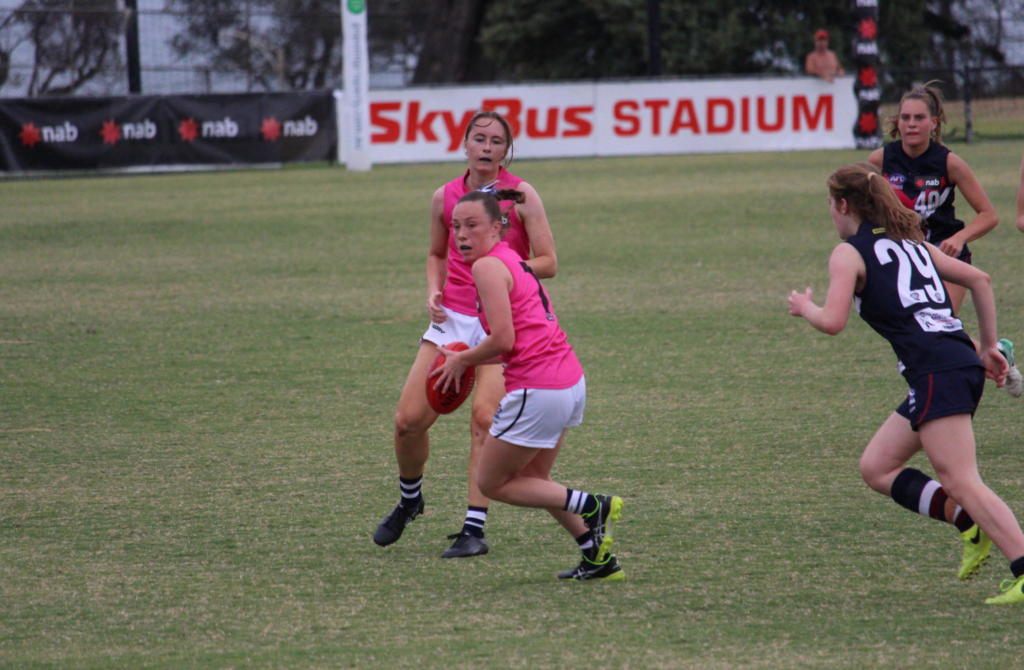 FOLLOWING in the footsteps of her older sisters, Paige Sheppard was lucky enough to already have people she could lean on in the female football pathway. The Geelong Falcons’ top-ager earned Vic Country selection after a strong year, which then followed on by a National Draft Combine invitation. Speaking at the combine, Sheppard recalled how her football journey came about.

“My two older sisters played footy so I always grew up watching them and I didn’t play, but a couple of games they were low for numbers so I just filled in for the team and then I just ended up playing and that was about four or five years ago,” Sheppard said. “I always grew up watching them, I was always kicking the footy but I always had them so it was a way to get into it. “I just kept playing and my sister as well, she played for Falcons and we both got into it together and from there it just grew.”

Sheppard has come a long way in 2019, with her decision making and ability to hit targets inside 50 among her self-proclaimed strengths, while the 159cm prospect hopes to develop her initial speed and using her body more effectively against her opponents. While her sisters have been mentors along the journey to pave the way for her, a premiership teammate has been her biggest inspiration.

“Lucy McEvoy (is my inspiration),” she said. “I started the Falcons with her and she’s just been one you always look up to as a leader and as a player you always just want to be.”

After averaging 17.1 disposals, 2.0 marks, 4.6 inside 50s and 4.5 tackles in season 2019 with the Geelong Falcons, Sheppard was named in Vic Country’s squad to play at the AFL Women’s Under-18 Championships.

“It was a very different experience playing against the best in Australia,” Sheppard said. “It was a step up, but it was very beneficial experience.”

There, Sheppard helped herself to 11.3 disposals per game, also kicking a goal for her state as Vic Country won all three games in the second series after going down to their metropolitan counterparts a few weeks earlier. Her performances throughout the year earned her a combine invitation, something Sheppard admits came as a surprise.

“It was a definitely a surprise,” she said. “I wasn’t expecting it. “But I guess it was just a look into the future.”

Sheppard has nominated all of Victoria to give herself the best chance of landing at an AFL Women’s club for 2020. While many aspiring draftees might move around due to university or further studies, the talented midfielder is yet to know what she wants to do off-field, still weighing up her choices.

“Well footy is definitely in my future career, but with school and uni, I haven’t quite worked that out and I’m just taking it as it comes,” she said.

Having also tasted experience against senior opposition with Geelong’s Victorian Football League Women’s (VFLW) side, Sheppard said the “very different” experience against “bigger bodies” was a “good opportunity” for herself and she was determined to knuckle down and work hard to win the respect of her future teammates if she was to be selected. If not, she would keep battling away saying the opportunities she had been afforded had helped her improve tremendously, and having more teams in the AFL Women’s would be “beneficial” for everyone.

“Yeah definitely, just all the Vic Country, VFL, it just makes you improve as a player playing against the best,” she said. “I feel like it’s very beneficial for us and it’s a good opportunity that we have quite a few options, not just a couple of teams to look forward to.”