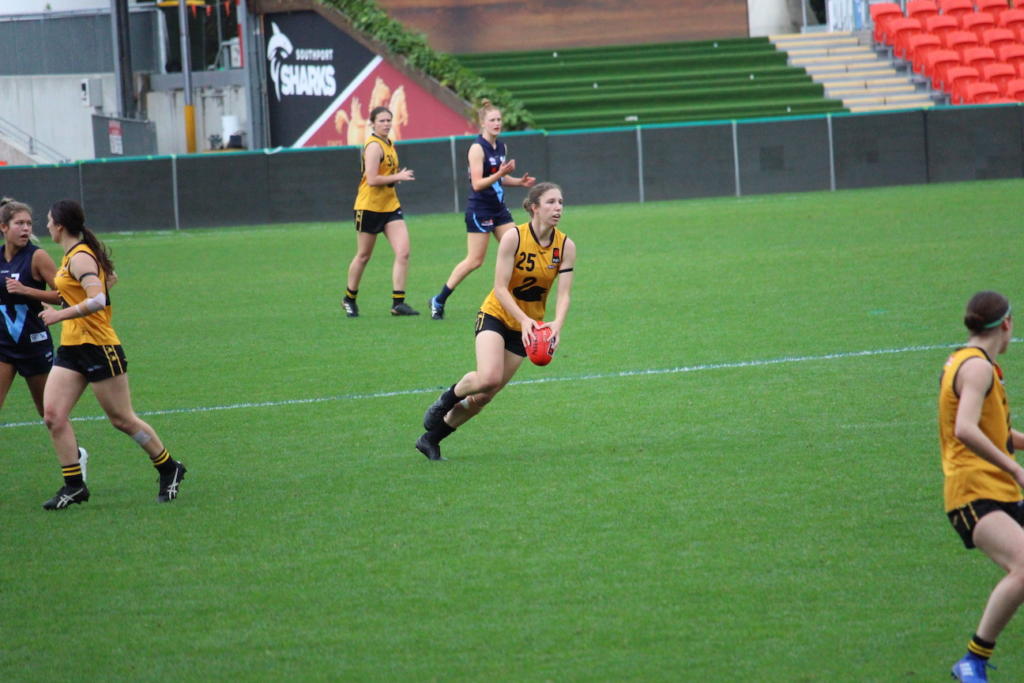 MANY current and future AFL Women’s players have come from other sports, or tried out other codes before settling on Australian rules football. For Sophie McDonald, she is no different with the former hockey playing heading down to a West Coast Eagles identification day to give it a crack, and 12 months later she earned a spot on the Eagles’ AFL Women’s list.

“To be fair I’ve grown up most of my life playing hockey and being able to be a state representative for that,” McDonald said. “Last year the Eagles were hosting an identification day, so I just went along there, you know, why not, I’ve grown up with footy, playing second fiddle to my life as well, “It really started from there and so I was lucky enough to train with the Eagles Academy during summer and then that led onto me of course now representing WA for State 18s, which is great.”

The atmosphere around the football club drew McDonald in and kept her attending trainings, as the Eagles helped develop her into a key position defender who intercepted the ball going inside defensive 50 when she played for Western Australia.

“I think it’s the relationships you have (that have kept her in the sport),” McDonald said. “Obviously growing up with hockey, it is a lot different I think, personalities between the two sports. “But as soon as I started coming to club trainings and all that, it’s been so welcoming and it’s been really a family to me, a second family, and it’s just been delightful.”

McDonald admitted it was not always easy to transition between the sports, while juggling other commitments with school and work.

“I don’t know, honestly it is a bit overwhelming sometimes when you just stop and think about it and just think, ‘I’ve just done all this in one year’,” McDonald said. “I just try and zone out as much as possible and just try not to think about, you know, how much I’ve achieved because it will just set me off. “If I just listen to music, play music and just think about other things just so I don’t stew on what I’ve done and get obsessed with it ”

McDonald said there was plenty to work on with regards to her game, but her tactical nous coming from a highly tactical based sport of hockey, helped her understand that aspect of the team game.

“Probably my footy IQ and knowledge (is a strength), and coming from hockey being able to transition easily in terms of knowing tactics and being able to adapt to different situations and probably my height and my speed and just being able to create a contest in the air,” McDonald said. “Obviously to make it to this level you have to have some kind of talent and to be able to go against similar skill level and even above for this is just amazing and to be able to see what they do and then take that upon and put into my game which would be amazing, seeing someone go for a grab and be like ‘yeah I’d like to be as good as that’ and just try and implement that into my game.”

While she did not always play football, McDonald was always a passionate supporter of the game, regularly watching the AFL Women’s.

“Oh definitely, always watch the footy when I can so hopefully AFLW, and you know if that doesn’t happen maybe a career either coaching or part of the support staff there would be amazing,” McDonald said at the Under-18 Championships.

The travel time for her commitments has been significantly shortened since she moved to Perth this year, making the four and a half hour trip from Albany to play and train a thing of the past. It would not have been possible without the support of her family who backed her into playing the new sport.

“Yeah my family has been great honestly,” McDonald said. “They really got me through last year with all the travel and all that and they’ve just been really supportive in everything that I’ve done and said ‘if you wanna pick one or the other or both it’s fine, do what you want we’ll support you no matter what’.”