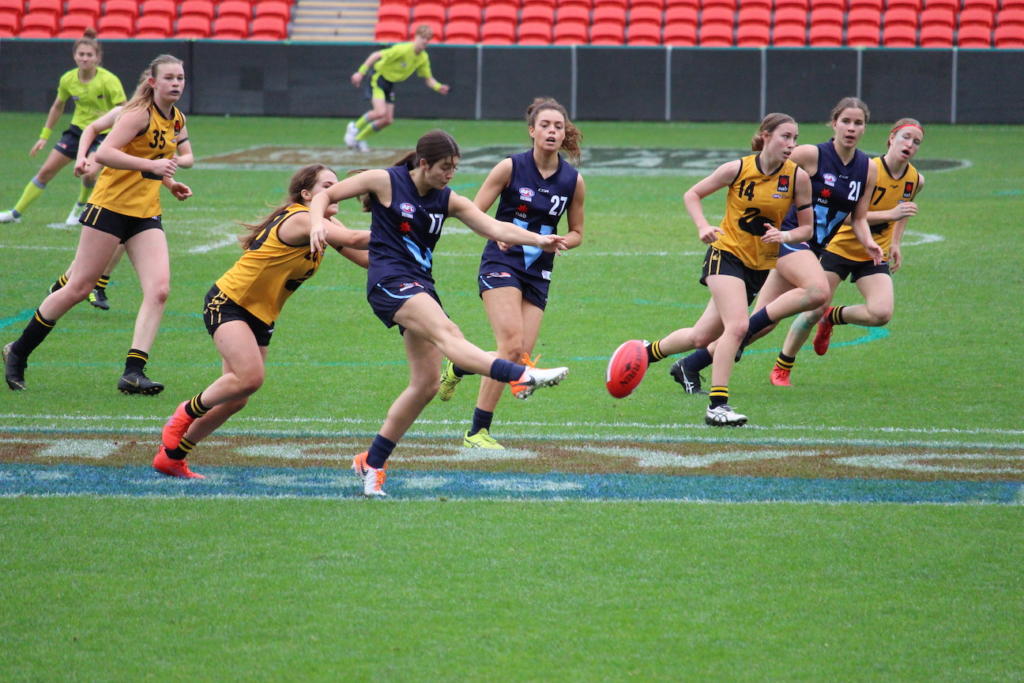 IT has been a whirlwind 12 months for Calder Cannons’ and Vic Metro star, Georgia Patrikios. After telling us her journey into football last year, Draft Central caught up with Patrikios at the AFL Women’s Draft Combine where she described what the experience had been like in her top-age year with so much expectation around herself and her peers.

“Footy’s been pretty full-on actually,” Patrikios said. “We started off early November with the Cannons and that sort of lead up to earlier this year it finished off. “Then we went through to Metro, to the carnival and then after that I had Essendon VFL and it’s lead me to here.”

The year began with Patrikios captaining the Cannons into a Grand Final, but falling one win short of repeating the premiership effort from two years ago, albeit then without a grand final. But given the age demographic of her side compared to many others, Patrikios said it was a terrific year for the club.

“We had a few of those younger girls in our program the year before and they’ve got a few games into them,” she said. “Coming into this year they all had a few games under their belt and their confidence grew a bit so that helped them playing the year before, but we did have a better performance, it’s just a better result for us I think.”

Just making it into the Grand Final was “unreal” with the Cannons finishing third and having to upset reigning premiers Geelong Falcons to book a spot in the decider at Ikon Park the following week. While Calder went down to the Knights, Patrikios recalls the feeling following the preliminary final win.

“It was an unreal feeling,” Patrikios said. “You could just tell with all the girls how happy we all were. We did have belief that we could have gone and won the grand final the next week, but it just wasn’t meant to be. “Everyone was really happy with our performance and for being the underdogs to actually beating Geelong was just a great effort and I was proud of the group.”

To captain the side into a Grand Final was a moment Patrikios is sure not to forget anytime soon.

“It was just surreal,” she said. “I didn’t even have words to explain. “The group of girls we had was just amazing and it just showed, we did have a young side and we made it to the grand final. “That was a really good effort and really honoured to be given that label (captaincy), but at the end of the day it was just a label and I’m just like everyone else in the team.”

On the individual front, Patrikios went from strength-to-strength once she donned the navy blue and white ‘V’ at the AFL Women’s Under-18 Championships. The winger earned the Most Valuable Player (MVP) award not only from her own side, but the overall tournament, following in the footsteps of close friend, Madison Prespakis 12 months earlier.

“Probably Metro’s one of the best carnivals I’ve had, playing through the past three years and even playing through NAB I’ve shown the most at this nationals that just passed,” Patrikios said. “But even going into VFL, I feel like I played pretty well and I’m just trying to continue to build onto that hopefully into AFLW.”

“It was actually a surprise (to be named MVP),” she said. “I was actually looking around to see who I thought was going to win it, I was looking across and then I heard my name get called out and it was just a surreal feeling and was just a real honour and a player of the championships and to see the girls that had won it previously such as Nina Morrison and Maddy (Madison Prespakis) last year and see where they are now, it’s just a real honour.”

The potential top five pick said while the year was a success, she admits she struggled with the weight of expectations early in the year, not necessarily from external sources, but from within.

“I think at the start I put a lot of pressure on myself, coming through NAB League and I think that’s when I wasn’t playing my best when I was putting that pressure on myself,” Patrikios said. “If you think about it, I’m the only one who puts pressure, so that was sort of what happened during NAB, and then I got my confidence back coming into the championships, that I was cut out to play at that level so yeah, just ensuring that I was trying to play my best and put my best foot forward.”

This year Patrikios has been working on building her endurance to improve her two-kilometre time trial time, as well as her overhead marking, something she hoped would hold her in good stead for the future. While she has played in numerous roles, Patrikios said a wing and eventually the inside midfield – once she added size to her lighter frame – would be her preference.

With the Western Bulldogs holding the top pick and Carlton holding pick two, plenty has been speculated about who might go where, with Patrikios already having links to the Blues through university.

“With Carlton I’m there at uni two times a week and sometimes I run into the recruiters or Ash Brown (General Manager of Women’s Football) and we just have a little chat,” Patrikios said. “There’s not too much that happens but we do chat if I happen to run into him, but we’ve just got to wait and see.”

Not to mention one of her inspirations was a revelation in the 2019 AFL Women’s season, taking out the Rising Star Award in the navy blue. But Patrikios admitted she has a number of inspirations over the journey.

“I have a couple (of inspirations),” she said. “Inside footy, it would be Maddy Prespakis. “We’re really close inside and outside of footy and she gives me a lot of advice and helps me out if I need anything, if something’s wrong. “She’s obviously been through it so she knows how to go about it and stuff. “Outside of footy, probably my brother and my parents. “My brother plays footy, he sort of knows what I’m going through.”

While Patrikios could end up at one of a number of clubs, it is expected it will not take too long to hear her name read out, and whatever colours they might be in, she is determined to make an impact at pre-season training immediately.

“I’m a hard worker and I want to earn the respect of all my teammates as you do going into a new club and just put your best foot forward for all of them to see,” she said.