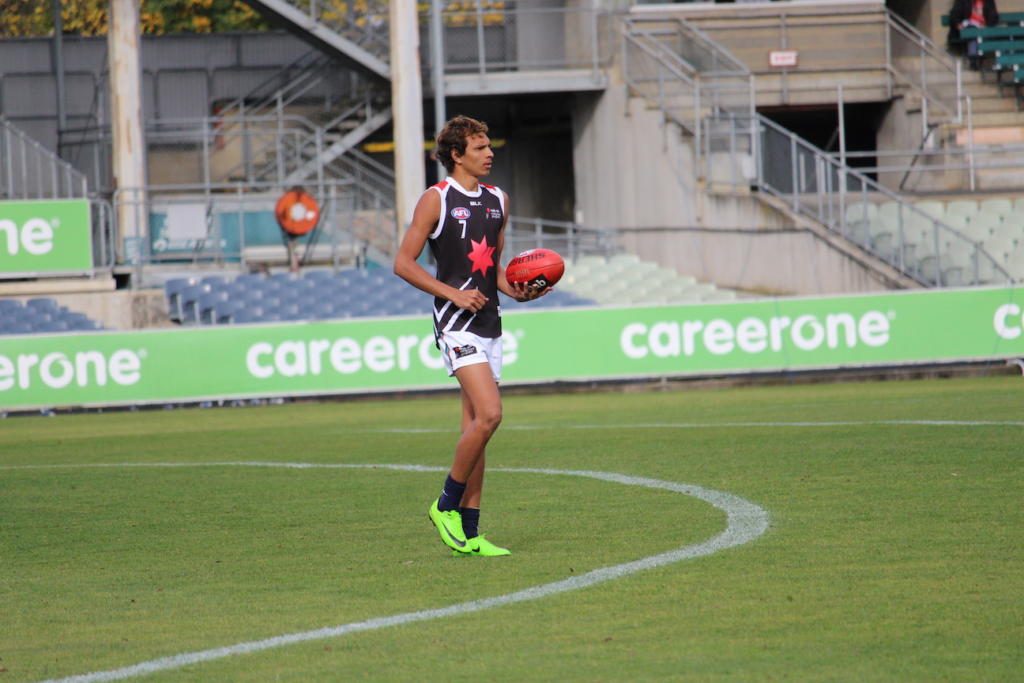 THE 2019/20 Northern Territory Football League (NTFL) season got underway on the weekend and produced a truly mixed bag of results. While Southern Districts was unable to make good on its grand final loss in a rematch against Nightcliff, the Darwin Buffaloes put their dour end to last season behind them, while Waratah and St Mary’s also picked up confidence-inducing wins.

A remarkable 12-goal haul from Adam Sambono propelled Darwin Buffaloes to a resounding 113-point opening round win over the highly-touted Tiwi Bombers. The Buffs look to have ironed out the issues that saw them go down by a similar margin in last year’s finals series, with Sambono booting half of his side’s 24 goals in the 24.13 (157) to 6.8 (44) romp.

Joe Anderson joined Sambono as the other Darwin leader to stand up with three majors of his own, matched by Christopher Williams and rounded out by Brayden Corey Culhane’s two. Despite their efforts, it was Bradley Stokes and Kelvin Williams who were recognised as the Buffs’ best, while David Kruse claimed the same plaudits from the Bombers’ camp. Usual suspects Adam Tipungwuti, Nathan Djerrkura, and Ross Tungatalum also provided good ball-winning value in the heavy loss, while Casey Demon Liam Wale-Buxton was Tiwi’s only multiple goal kicker with two.

Remiss of the final scoreline, Tiwi led at the first break by seven points, with Darwin’s combined 17 goals to one in the second and third terms setting up the big win. The result was well beyond doubt heading into the final term, but the ruthless Buffs poured on a further five goals to Tiwi’s two to finish off ensure they breached the 100-point margin mark.

Bouncing back will be a tough ask for the Bombers as they prepare to face reigning premier Nightcliff in Round 2, while Darwin will be in the hunt for consecutive wins when it faces Round 1 losers Palmerston next time out.

It was a case of déjà vu in the grand final rematch as Nightcliff got its title defence off to a winning start to the tune of nine points against Southern Districts. The Tigers overcame deficits at the first two breaks to close better in the 13.10 (88) to 12.7 (79) result.

A high-scoring opener saw the sides share twelve goals evenly, with the Crocs finding a bit of breathing space at half time on the back of three goals to one in the following term. But the Tigers managed to chip away in the third quarter and match Southern Districts’ efficiency in front of goal before less-clinical final term saw them edge over the line and truly pick up from where they left off in the 2018/19 season.

Lachlan Sharp (four goals), ex-Port Adelaide forward John Butcher (three), and Brodie Filo (two) were all effective around goal for Nightcliff, with Filo named best afield along with Roger Morris. The Crocs had one more multiple goal kicker than the Tigers but could not match their depth of contributors, with Will Farrer (four goals), Sam Barnett (two), Timothy Brook (two), and Jayden Clarke (two) all getting on the board. Damian Williams was named best for them, with Zorran Bin Busu the only other non-goal kicker to also be named among the best dozen.

Nightcliff will look to build an early unbeaten streak next week when it faces Tiwi in Round 2, with the Bombers coming off a loss in excess of 100 points. On the other hand, the Crocs will have their hands full with Round 1 winner Wanderers next time out, looking to prove their credentials with four points.

Wanderers overcame some early inaccuracy to outlast 2018/19 preliminary finalist Waratah and open its season with an uplifting 18-point win. Both sides enjoyed spurts of momentum throughout, but the Muk Muks’ firepower inside 50 proved too much as they pulled away to finish 15.14 (104) to 13.8 (86) victors.

The Warriors looked to have overcome a slow start as they took a one-point lead into half time with goals coming thick and fast, but it would be the only break they could do so in as the Eagles hit back to immediately. The momentum switched again as they notched 4.3 to Waratah’s 2.3 in what was a match-defining third term, but the Warriors still had a sniff heading into the final stanza. That hope was quashed despite Waratah getting the better of the final stages overall, with Wanderers doing just enough to keep their consistent opponents at bay.

Two men did most of the damage in terms of goals – one coming from each side. Prodigious talent Joel Jeffrey continued the form that saw him star on the MCG in the Under-17 Futures game with a dynamic five-goal haul, matched by Waratah powerhouse Abe Ankers. Jae McGrath (three) and Alex Aurrichio (two) also bagged multiples for the Warriors, while Davin Ferreira kicked two classy goals alongside ex-Sun Liam Patrick. Wanderers’ Ronald Fejo Jnr also earned the Round 1 Rising Star nomination.

The Eagles will have to quell a Southern Districts side breathing fire in Round 2 to maintain their perfect record, while Waratah will hope to get on the board when it faces Round 1 winner St Mary’s on Saturday night.

2018/19 wooden spooner St Mary’s began its quest to climb from the bottom in ideal fashion, downing Palmerston by 30 points to round out the weekend. The Saints overcame inaccuracy throughout the match to solidify the 10.15 (75) to 6.9 (45) final score, and the margin clearly could have been much more.

As was a similar theme throughout two of the weekend’s other games, Palmerston managed to get on top in at least one quarter of play, but could not maintain the effort as they tired in the second half and struggled to score. There were no such issues for the Saints as they managed to boot eight majors in a match-winning second half performance.

St Mary’s leader Raphael Clarke was best afield with his two majors, matched in the goal stakes by teammate Dylan Johnstone. Jackson Geary and Nathaniel Paredes were others to contribute well, with the former also hitting the scoreboard for the winners. It proved a busy couple of days for state combine invitee Nigel Lockyer Jnr, who managed to snare three goals just a day after his fitness testing in Melbourne. Debutant and future Essendon father-son prospect Jayden Davey also found the goals as one of three Magpies to do so in the final term after Lockyer’s big first half.

Palmerston faces the daunting task of taking on a rampant Darwin side in Round 2 to rectify its form, while the Saints will look to go 2-0 when they clash with Waratah at TIO Stadium.