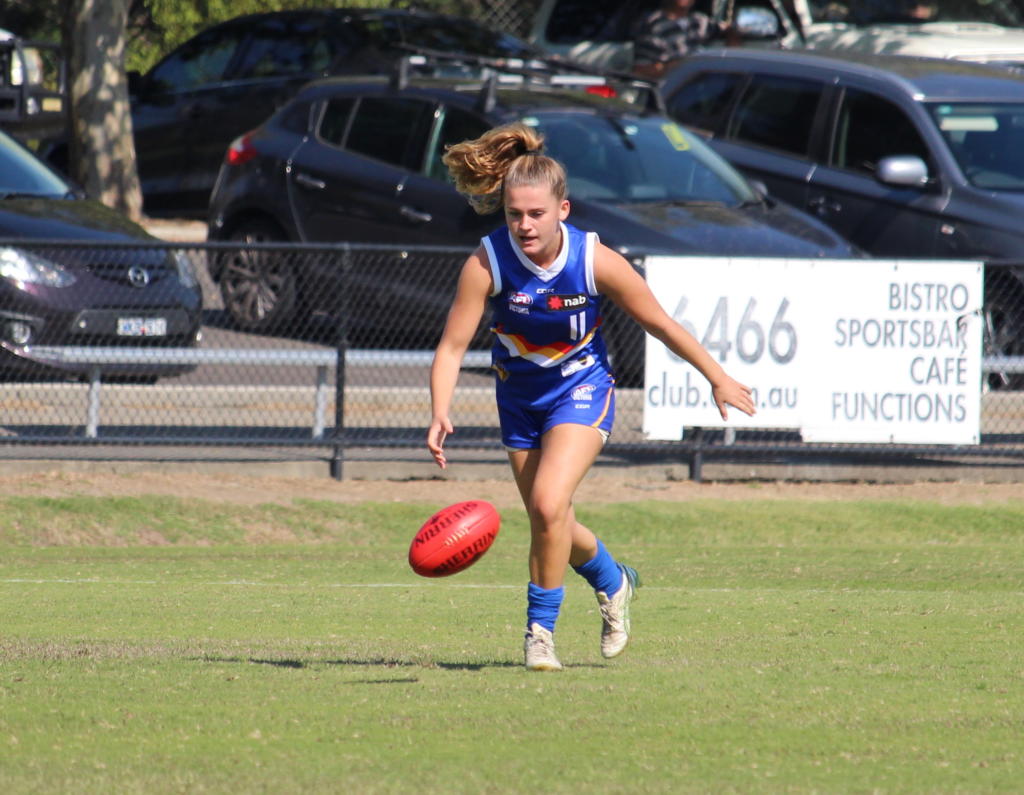 WHILE many draft hopefuls are judged from the eye on their on-field capabilities, Eastern Ranges and Richmond Victorian Football League Women’s (VFLW) youngster Madeleine Edwards has developed a great balance of on and off-field traits that will hold her in good stead for the future. Speaking at the NAB League Fitness Testing Day, it was clear Edwards speaks well beyond her years, able to identify exactly what she wants to achieve and improve on, while providing leadership and guidance for fellow talented footballers.

I started pretty much with school footy,” Edwards said. “My friend was one of the only girls that I knew that played girls footy so that was when I was in Year 8. “They had the YJFL (Yarra Junior Football League) which was the only league that was there, so she got me to come down and play and ended up loving it.”

It was the excitement and passion around the football environment that drove Edwards to continue to improve and put herself in the limelight to be selected for the Ranges, and eventually the Tigers.

“I really like the environment,” Edwards said. “I feel like with footy everyone gets around each other really well and it just brings a real positive energy and similar personalities in the way that everyone just gets along and it just makes it such a positive experience.”

It was this positive experience that made Edwards determined to provide the same level of care and help to younger teammates while she played through her top-age year. She said the team goal was to develop everyone as much as possible to set them up for the future.

With such a young side, Edwards made it her responsibility to get around the new faces and help them settle into the club alongside the other experienced players within the playing group.

“When they came in they were obviously pretty nervous,” Edwards said. “As you would be coming into a program like Eastern Ranges. “It’s a pretty new experience, pretty new competition. “Just getting around them and making them feel as comfortable as possible and giving them heaps of encouragement.”

For her own personal goals in season 2019, Edwards was focused on not being too hard on herself and her achievements within games, rather focusing on making amends.

“Individually probably just my mental aspect of things, like not being so hard on myself like if I feel I’ve had a pretty crappy game,” Edwards said. “As a team, probably more just playing as a team, working together so just the little one percenters, bumps, shepherds, getting around each other, lifting each other’s confidence. “You end up playing better as a team.”

That team-first approach helps when Edwards is focused on building resilience, something she said is able to occur when you are in a club like the Ranges.

“I think it really depends on the environment you’re in,” Edwards said. “With Eastern it’s really awesome because the coach is pretty much your mate, and everyone is just so friendly with each other. “It just also comes down with taking time out for yourself, like we’ve all learnt with meditation to take time out for yourself every day in everyday life so it really represents on the footy field as well. “Just focusing on yourself and getting around your teammates.”

While many draft hopefuls can forget the main reason they started playing the game – enjoyment – it has not been lost on Edwards when she set her personal goals at the start of the year.

“Just doing the best that I can, knowing that I’m fulfilled with how I have gone,” Edwards said. “I know that I’ve done it to my best ability and tried my hardest and gone as far as I can go. “Just making sure that I’m still enjoying it all along the way.”