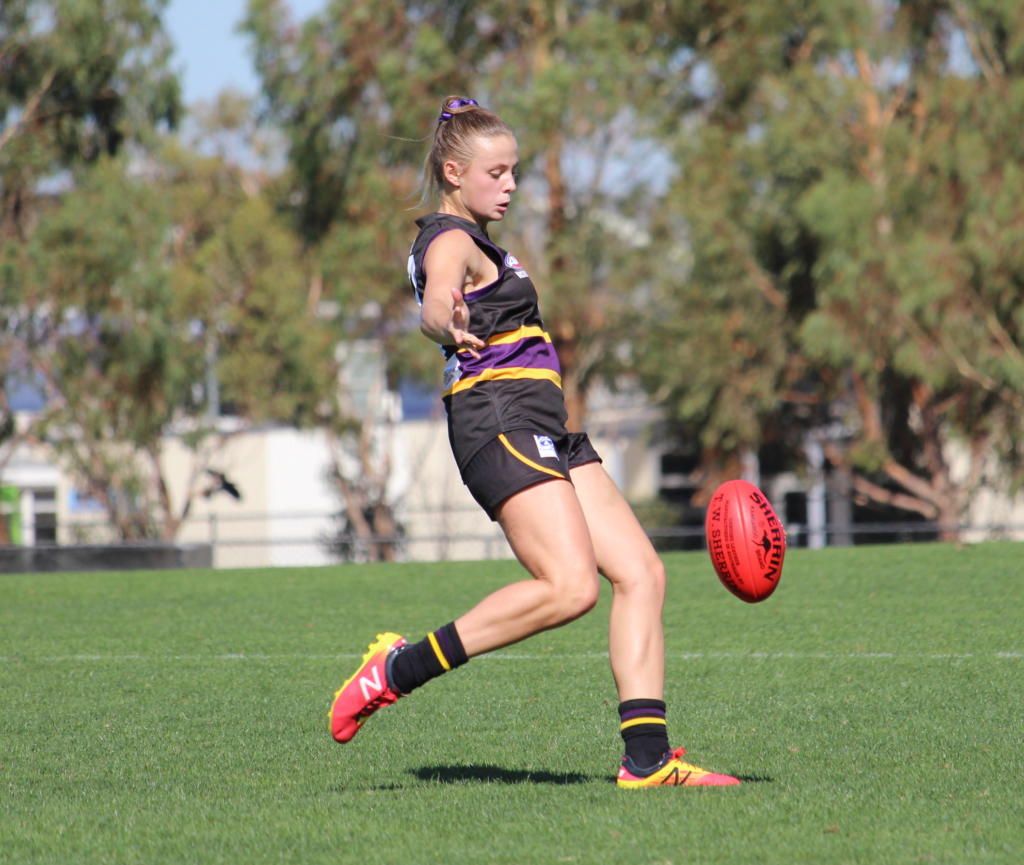 IF there is one area of the game that you can guarantee from Murray Bushrangers’ defender Sophie Locke, it is her tenacious tackling pressure. Having been denied the chance to play for a number of years given the concern from her family, it turns out Locke was not the one to be worried about – more her opponents who had the ball when she was in their vicinity.

“I started when I was kicking the footy with a friend of mine in between a senior game and got asked to play footy and they finally persuaded my mum to let me,” Locke said. “So started off later in the season so only got like two games.”

“(My favourite thing is) being able to tackle people,” Locke said. “Just like getting out the aggression on the footy field. “I played netball and it’s a very soft sport and now I get to take them down, chase them down, I find it really satisfying.”

Locke said having come from a netballing background, both sports assisted in the development of the other with similar traits, but also areas that added extra elements to her game in the opposite code.

“I think footy I really benefit, my netball and my game at netball and my fitness especially,” she said. “I think I got the ball a lot harder before I started playing footy. “I think it’s benefited me both. “They’re pretty similar I guess and it’s just taking the ball one at a time.”

At the NAB League Fitness Testing Day earlier in the year, Locke had simple goals for the season after a big pre-season.

“Just getting out there really,” Locke said of what she was looking forward to this season. “I’m excited that the season’s started now. “We’ve had pre-season now and I’m just happy that it’s begun. “I’m happy I can put what I’ve done in preseason and put it in a game. “(I) just (want) to play my own game, increase my fitness and hopefully get a win out of the season which would be nice.”

Locke was one of the more senior players in a young Bushrangers’ outfit, which she admitted had really transitioned over the past 18 months with so many top-agers moving on from the club and more youthful talent joining the ranks.

“The young players, some of them have more experience than myself,” Locke said. “I think they’re really mature, and really smart and understand the game just as well as we do and it’s just getting them involved in the team because some of us have played for Bushies more years than others. “I think the transition has been pretty awesome.”

In season 2019, Locke averaged 4.7 tackles from 8.7 disposals playing in defence. She locked down on opposition forwards and gave them no time or space to create scoring opportunities. It impressed the Victorian selectors so much she was picked for Vic Country where she played two games at the AFL Women’s Under-18 Championships on the Gold Coast in Series Two, averaging 8.5 disposals and taking the tackling pressure up to another level with 6.5 tackles per match. She spent more time further up the ground through the midfield, and relished on the tackling pressure she could provide. Now with the games all but done and dusted, it is a waiting game for the AFL Women’s Draft, but whether it is this year or in the coming years, one thing is for sure – Locke will not stop trying to push herself to be the best possible player she can be.