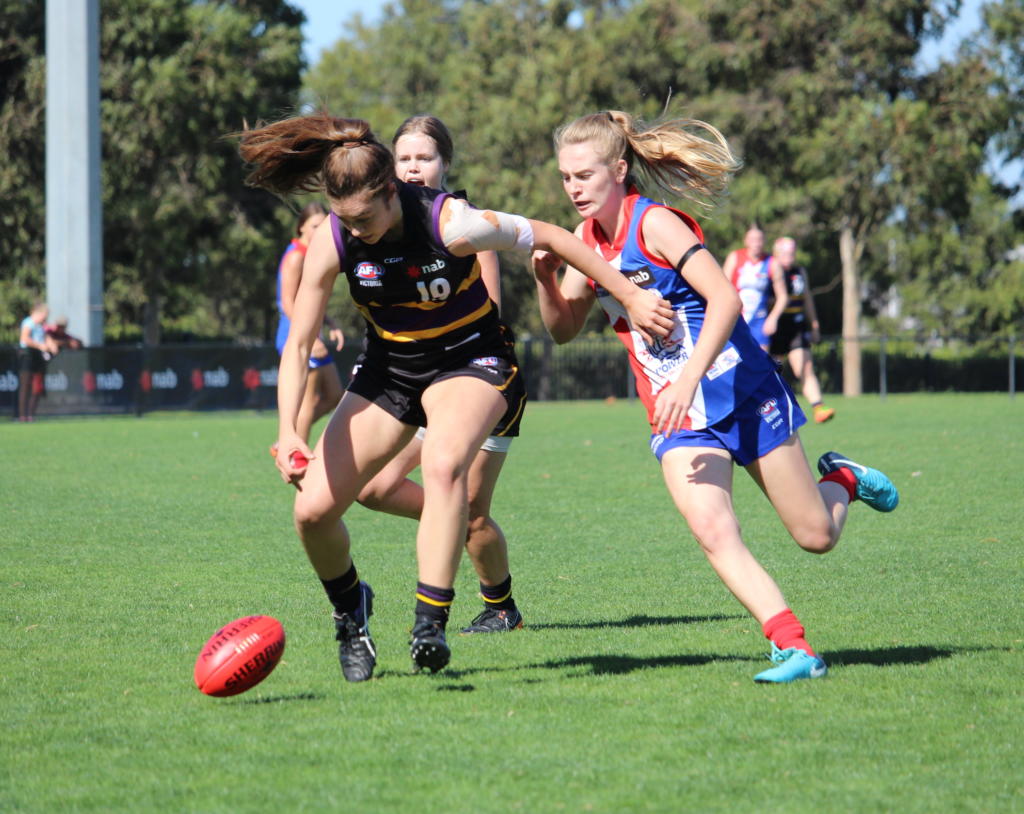 AFTER Millie Brown told us her story last season as a bottom-ager, the Murray Bushrangers captain returned to the NAB League Girls competition with a new role and standing up for her side week-in, week-out. Speaking at the NAB League Fitness Testing Day, Brown said her contested game was a real focus for her coming into season 2019 having spent most of her bottom-age year using her run up either end.

“Probably (developing) my contested ball (is my main focus),” Brown said. “As well as just ensuring that I’m a good leader for my team because we need some leadership. “It was a difficult game on the weekend, so really keen to help the girls out.”

That difficult game for the Bushrangers was the Round 1 76-point smashing at the hands of reigning grand finalists and would-be premiers, Northern Knights. On that day, Brown was unavailable and had to watch from the sidelines as a side brimming with bottom-age and 16-year-old talent was overpowered by a tenacious and determined Knights outfit. With Brown back in the side the following week, Murray bounced back with a four-goal win over the Western Jets before posting a 27-point victory over Gippsland Power. They might have gone on to lose five of their last six games – a remarkable road win against Sandringham Dragons the exception – but did not lose by a margin greater than the Round 1 defeat. Speaking at the time, Brown said it was about bringing the effort each and every week regardless of talent or experience out on the park.

“Probably just a bit of intensity (is what we need), just helping the girls get up and about,” Brown said. “We had a lot of debutants and fresh faces into our first game so it will be really good to bring my experience to the team and just get their attitudes right for the game.”

For Brown’s focus on building her contested ball, she said it was about making her game was rounded as it could be.

“I think in the past I’ve got good skills, but haven’t been aggressive at the ball, so I want to really use that to up my game,” she said. “I think just improving my skills as a whole at that. “Making sure that I’m being a leader for the girls, not just for myself.”

As for her goal, it was no surprise to see the potential Geelong father-daughter selection set her sights on being drafted into the AFL Women’s competition for 2020. Being one of the shining lights for Vic Country in defence, earning All-Australian honours and a National Draft Combine invitation, expect a big future from the talented utility.