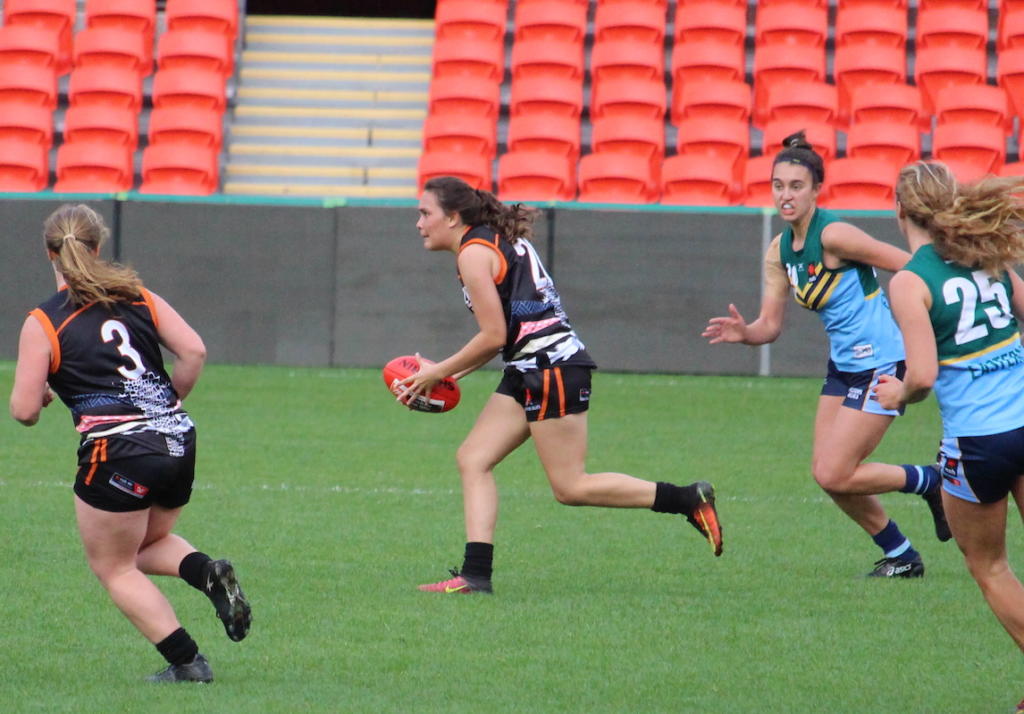 AT only 18-years-old Shoneeka Abbott has been dealt her fair share of obstacles in her football journey, but come out better than ever with plenty of high praise despite her age.

Abbott represented Central Allies in the 2019 AFL Women’s Under-18 Championships, earning a debut for NT Thunder VFL Women’s and awarded the CAFL Rising Star Award in August for her efforts in the Central Australian Football League.

The Alice Springs local was not allowed to play football during her junior years despite plenty of begging on her part, not getting a real opportunity to put boot to ball until moving to Darwin.

“It was actually like four or five years ago, I couldn’t play AFL Women’s back at home because I was too young so I had to go through school, but it was even difficult going through there because I was still too young,” Abbott said. “So I begged them to let me play and then it all started from there and girl’s academy, and then that’s when I went away to Darwin and that’s when I got noticed. “I was in Year 7, so I was so young and they wouldn’t let me, and I had to beg, beg, beg until they let me.”

While many would have taken that to heart the defender was unwilling to give up, proving everyone wrong when she was finally able to prove herself on the field.

“I’ve always played back in state and all that but when I’m back home I switch back to the middle… I like to support the players at the back and blocking the goals, it’s fun, the back line is so important, but I find every position important,” Abbott said. “It was a little bit later, after I came back from Darwin, the local team – like my mother’s team, noticed like ‘oh hey you look pretty good, you can handle it’ and I was like ‘yeah that’s what I’ve been saying!’”

The 18-year-old started out as a basketballer along with some junior netball experience, but had plenty of love for footy despite not being allowed to play for a long time.

“It’s part of my family, sort of. My grandpa played it, my uncles, cause I usually grew up with fellas around me so it was always about football, football, basketball and so yeah it’s just always been part of me,” Abbott said. “I’d been playing basketball all my life so I was like, I just need to lay off basketball for a little bit, and just focus on football and see where I go with that.”

Along with making the switch from basketball, Abbott also made the switch from her home town of Alice Springs to Darwin, moving away from family and friends to play a higher level of footy.

It was family that got her through however, with plenty of support back home spurring her on both in Darwin and when representing Northern Territory in the Central Allies. Abbott was the only Alice Springs player selected, proving her real potential.

“There were a couple of times where I thought about giving up because of the difficulties, cause I’m from Alice Springs and I can’t communicate from Darwin that well,” Abbott said. “Yeah definitely my uncle, my mum, just everyone telling me not to give up and keep on going,” Abbott said. “I still live in Alice, so it’s still difficult for me because I’m the only Alice girl here. I think just to make everyone proud at home, all the family and stuff. “Sometimes I find it difficult because like, Darwin girls have got each other and then there’s Adelaide girls that have got each other, and then there’s just me, one Alice girl!”

Abbott said representing the Allies was an honour, with the defender remarking that she would definitely like to get drafted as the ultimate goal.

“Where I’m from, it’s like a big honour,” she said. “Just representing both states, SA and the Territory is just amazing,” Abbott said. “I think (my strengths) would be my ground ball and my one percenters, just going in there, trying to handpass it to the back or front… I can’t really run a whole field, that’s why I love the back but yeah, running I need to improve on a lot.”