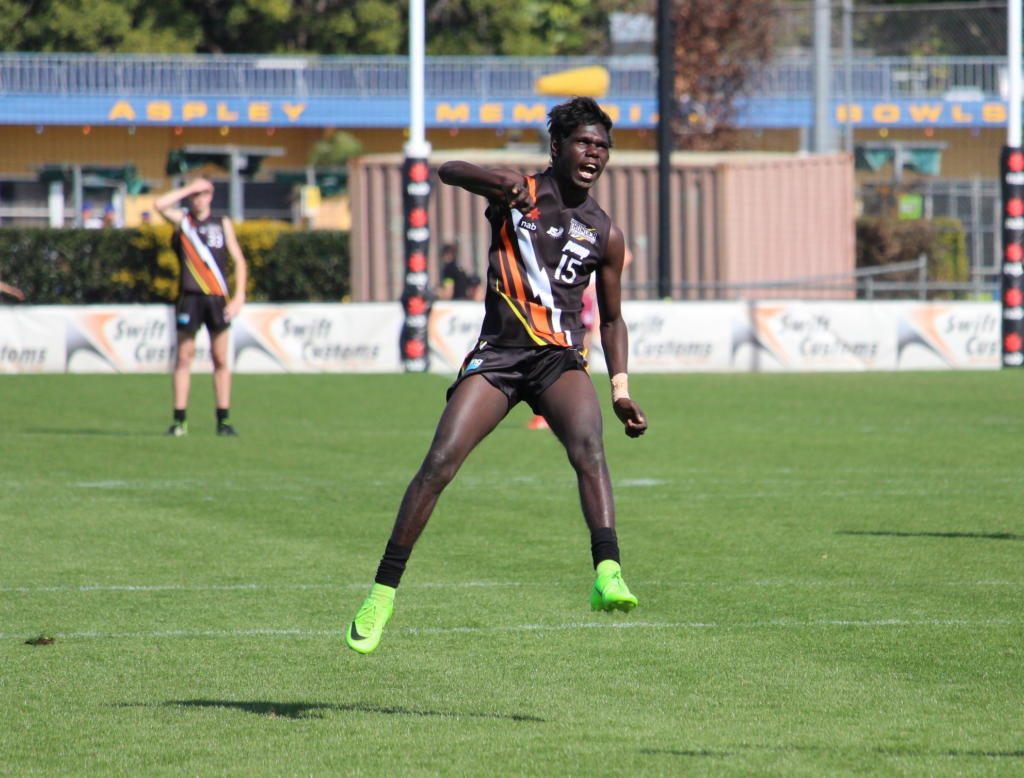 WITH the Northern Territory Football League (NTFL) Men’s Premier League competition set to get underway on the weekend, we take a look at the eight teams competing for the ultimate prize over the summer.

The Buffs are coming in off an indifferent 2018/20 campaign that saw them scrape into finals after a promising start. They were eliminated in a crushing 73-point elimination final loss to Waratah after going down to the Warriors in Round 18 as well, finally folding after struggling to reclaim the early-season form that had them pegged for another top two finish. Having captain-coach Matt Campbell and star players Joe Anderson, Adam Sambono and Malcolm Rosas Jnr shuffle in and out of the side at times did not help the Buffaloes in their search for some consistency, but the talent base is certainly there. Ex-Blue Anderson and highly rated junior Sambono are poised to feature prominently again under Campbell’s tutelage, while Rosas Jnr’s availability hinges on his AFL Draft hopes. Those three are all capable of seeing a heap of the ball and having important touches, with the consistent figures of Shaun Ahmat and Kevin Maroney set to again add that stability to the lineup each week. With Rosas seemingly moving on to the elite system, the young gun in Darwin’s crop this year is Antonio James. James featured for two straight years for the NT Thunder’s Under-16 side and was part of the Under-18 NAB League squad without playing, making him a good chance to feature for them in the upcoming season. The Buffs will be keen to see how he goes at Premier League level, with his enthusiasm and pace from defence helping him to stand out to this point. After a disappointing finish to last season, the storied club will hope to reach the heights they did in 2017/18 and sneak back into that top two. They certainly have the top-end talent to challenge, and should provide some highlights along the way.

The reigning premiers took home their fourth premiership cup last season, and in doing so moved one clear of Palmerston and Southern Districts to outright fifth on the overall premiership table. It was a dominant year for the Tigers, only losing thrice on their way to an outright minor premiership and getting up by 22 points over then-reigning premiers Southern Districts in the grand final. Trent Melville was the side’s spearhead, booting 56 goals from his 20 games to finish as the league’s leading goal kicker, but Nightcliff had a wealth of scoring threats. Melville will suit up again alongside the likes of Liam Holt-Fitz and Matthew Bricknell up forward, with big-man and NT Thunder representative Hugo Drogemuller a chance to feature up either end. The Budarick brothers, Jess and Joel will also be important between the arcs for the Tigers, with Joel turning out for the NT’s Under 18 academy this year. Jess appeared for the Thunder in the NEAFL this season and should add to his games tally this time around, adding to Nightcliff’s list of promising youngsters. Andy Moniz-Wakefield, Jamie Jones and Ned Stevens are also on that list after playing a part in the NT’s Under 16 campaign this year, putting the reigning premiers in good stead to feature well again and into the future. Their depth is solid, and their firepower is almost unmatched.

The Palmy Army experienced much more joy in 2018/19 after claiming the wooden spoon in season 2017/18, with a vastly-improved sixth place finish – just one win outside of the finals spots. The Magpies had their depth tested with ex-AFL players like Aaron Davey, Alwyn Davey, and Ezekiel Frank missing chunks of games throughout the year, while Matthew Stokes only appeared in a two-game cameo. All four of those stars provided great value though and could do so again in this year’s competition to aid a bunch of regulars who stood out. Victorian ruck veteran Matthew Dennis featured among the best for all but one of his 18 games last year and could go around again, with VFL player Dylan Gordon set to make his NT return. He joins the likes of prolific goalsneak Kyle Emery, as well as the ever-improving Nigel Lockyer and consistent figures of Samuel Autio and Samuel Talbot. Add youngster Jason Baird to the mix and so much of the Magpies’ firepower comes in their forward movers, despite not being able to post the biggest scores last year. Up the other end, their defence was the leakiest in 2018/19 and will need some tightening if Palmerston is to continue its upward trend.

So close, yet so far, the Crocs battled hard throughout the season and looked at times like premiership favourites, particularly after a 20-goal smashing of Tiwi Bombers in the preliminary final. But as they found out, the Grand Final is a different ball game, going down to Nightcliff by 22 points. That does not take away from the dominance the Crocs have had over the competition during the last two seasons, with a ton of depth and some scary firepower. Ex-AFL players Leroy Jetta, Richard Tambling, Ed Barlow and Jared Brennan were all terrific over multiple games for the 2017/18 premiers, adding arguably the highest level of ex-professional class. Goals came aplenty through the likes of Jess Koopman and Michael Mummery, while Bradley Vallance, Dean Staunton, Charles McAdam, and Beau Schwarze were others to combine their scoreboard impact with ball winning. They should all be important figures again if Southern Districts is to have another flag tilt, providing a consistent base throughout the year with a raft of other stars coming in and out of the team. It is always hard to look past the Crocs on paper and given the ability they have to blow teams away, expect them to be right up there once again this season. With young gun Brodie Lake also one of the NT’s big hopes for next year’s draft, they have some future talent to nurture too.

The NTFL powerhouse side was publicly in financial trouble over the off-season, but is back in the league to try and bounce back from its poor season last year. After missing the 2017/18 Grand Final for only the second time since 2002/03, the Saints went through a rebuilding phase last season dropping to the bottom of the table. With nine more premierships than its nearest rival, expect this successful club to move back up the ladder in season 2019/20. Former Gippsland Power prospect Nathaniel Paredes was the Saints’ shining light last season, featuring in the best 10 of 15 times and booting 20 goals in the process. A host of famous names and relations also fill out the side, with Ben Rioli and Jacob Long sure to join prodigious youngsters Maurice Rioli Jnr and Brayden Rioli – pending their availability. Nicholas Yarran and Raphael Clarke would be handy returns after solid 2017/18 seasons, along with the likes of Mathias Liddy. St Mary’s is renowned for producing top talent, and NT Under 16 representative Preyben Tipiloura is an exciting type to come through further this year alongside Rioli Jnr and Brayden Rioli, while Kieren Parnell is another rising star set to make his long-awaited injury return. Given the club’s strong history and the raw talent set to be displayed, expect St Mary’s to be a riser this year – the only was is up from last season after all – and a couple more former-AFL coups could help.

Tiwi very nearly became one of the better stories out of last season as their run in the back-end saw them earn an unlikely preliminary final berth. Although they were soundly beaten while searching for a grand final spot, the journey there was something to behold. It came long after a slow start to the season, with a raft of experienced and reliable players helping the famous Bombers click into gear. They were awesome in front of goal at times, and that is only set to be helped this year with the return of favourite son Cyril Rioli, who joins as a player-coach. The prospect of having him run around alongside fellow ex-AFL players Austin Wonaeamirri and Nathan Djerrkura, as well as Ross Tungatalum is scary and sure to bring plenty of excitement to the league. Add to that club stalwarts Jason Puruntatameri, Dion Munkara and prolific young guns Adam Tipungwuti and Jeffrey Simon, and you have a fun side destined for big things. The improvement they showed last year should only be built on this time around, and there is no reason why the Bombers cannot fly back to the top of the NTFL with a continuance of their form. Do not be surprised to see Tiwi go in as one of the flag favourites, and there will certainly be plenty of expectation given how dangerous they look on paper in the forward half.

A somewhat down 2018/19 season saw Wanderers narrowly escape the bottom of the ladder with a final round victory over Palmerston, despite only winning half the amount of games they lost in the 18-game season. It looked a justified ladder position given they were second-to-last for both points scored and conceded, but there are some promising signs pointing to the future for the Muk Muks. They are set to field young stars aplenty, with NT Under-18 representative Beau O’Connell one who could team up with Davin Ferreira through midfield alongside the experience of Marlon Motlop. John Tipiloura is another lively youngster, as is Mark White, who starred up forward in the 2019 Under 16 Division 2 carnival. But arguably the best of the lot is 2020 AFL Draft hopeful Joel Jeffrey, who was a regular for Wanderers last year and played out on the MCG in the Under-17 grand final curtain raiser. If he is available before his top-age year, look out for his high marking up either end of the ground. While the immediate impact of their talent has not quite translated to results just yet, expect to see the Eagles sore in years to come.

Waratah is a team which surprised some last year, holding strong with its local talent to cap a consistent year off in fourth place with an even record – hardly ever looking like missing out on finals throughout the season. Anchoring the side in midfield was Abraham Ankers, who will be key again in this campaign alongside fellow NT Thunder squad member Brodie Carroll, who played 16 games last year. Zach Westerberg, Cameron Barrett, and Henry Kerinaiua were others to hold down spots, and another possible cameo from ex-Melbourne forward Michael Newton could spell some more goals. Newton’s two games aside, Waratah is one of the teams with the fewest ex-AFL experience, making their exploits even greater. Andrew Moore could change that factor slightly as he is poised to sign for the Warriors, and Matthew Green could have the effect of a new signing after only featuring a couple of times last season. Watch for Under 18 Allies representative Ben Jungfer if available, given he is Adelaide-based, with his clearance work outstanding. With a lot of other sides improving, it will be a battle for Waratah to maintain their form, but they have the stock to match it with the best once again.