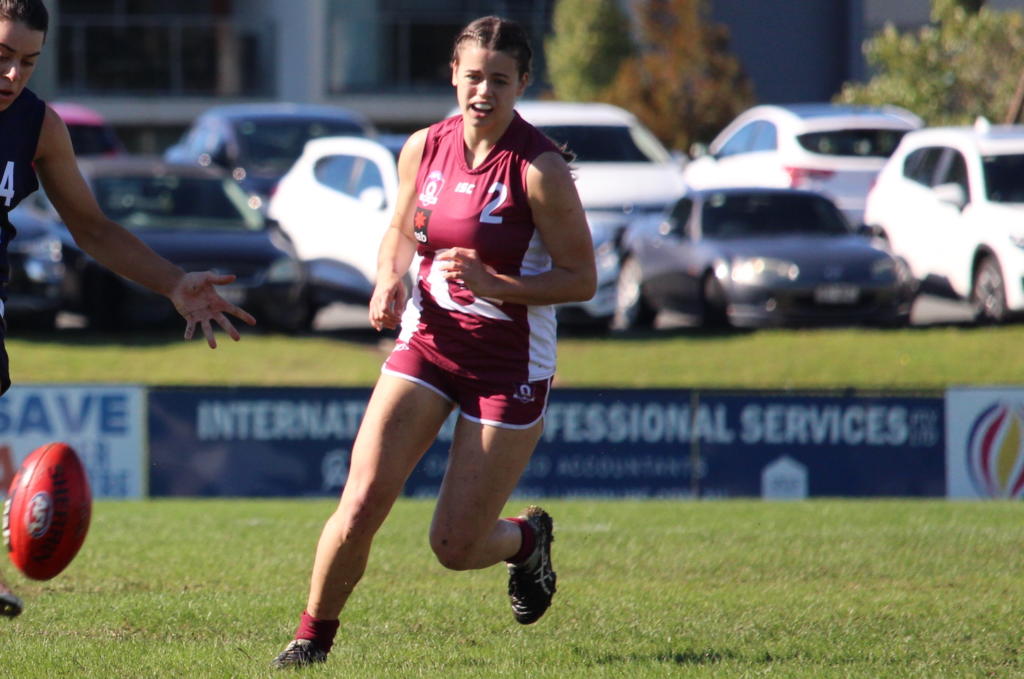 A RELATIVE newcomer to the game, Annie Muir has loved the rapid rise to the AFL Women’s Under-18 Championships. She only first picked up a ball a couple of years ago, and has met all the challenges put to her, to the point she has represented her state at the elite junior level.

“My friend actually got me into football in 2017,” Muir said. “So I was in Grade 11, she made me go along to just a school football trial for the Hinterland team – the regional team. “We didn’t even have enough numbers for a team, so everyone made it and then I went to the South Coast trials and I made the South Coast team and it all started progressing from there. “Once I made South Coast team, I decided to play club footy and I never really played footy before but I decided to go down to Broadbeach Cats and I started playing there and I basically haven’t stopped since.”

She came for the fun, she stayed for the culture.

“Just the atmosphere (has kept me playing),” Muir said. “Playing in a team, I came from a sprinting background so transitioning from an individual sport to a team sport was quite a big difference and I love playing in a team environment and having those girls to rely on and having that support network around me as well.”

Coming from a sprinting background, Muir said her speed is what sets her apart from many others, which she uses to her advantage and try to create separation from her opponents and bring teammates into the game. She knows she still has a long way to go however, often competing with players who have had the background knowledge of Australian rules football for a lot longer.

“There’s a lot of areas for improvement, I haven’t been playing for very long so just learning my positions – I predominantly play on the wing so just getting those setups right and then obviously continuing developing my skills and my communication and leadership on the skills,” she said. “We have such a good support network, and especially a lot of the girls are more experienced than me so there’s so many people I can turn to and ask for advice which is really handy in this environment.”

The quick rise to the Queensland state team has been lost on Muir considering how tough it is for any player to make a state representative side.

“It’s such an honour to be here and in this environment,” Muir said. “It’s an amazing support network, and we have so many people and it’s really an elite environment that it’s great to be a part of and develop our skills.”

Muir credited her father as being her biggest inspiration, but her whole family have been supportive of her decision to play football.

“My dad’s probably been my biggest inspiration, he grew up with football and he loved it,” she said. “I think he loves now having me play it. “He definitely keeps it going and keeps me passionate. “I have a such a support network. “Everyone, my friends and family have been very supportive.”

Now with the Under-18 Championships done and dusted, Muir is aiming to keep developing her game and hailing from the Gold Coast she “luckily” has not had too much travel to progress her career. She knows she still has a way to go to become the best player she can be, but has her eyes on achieving that goal.

“Just basically developing and learning, this is my first sort of experience at this high of a level,” Muir said. “I’ve already got a lot out of it playing one game so just continuing to learn and develop my skills and as a player. “(I) just (want to) keep developing, keep continuing, see how far I can go.”