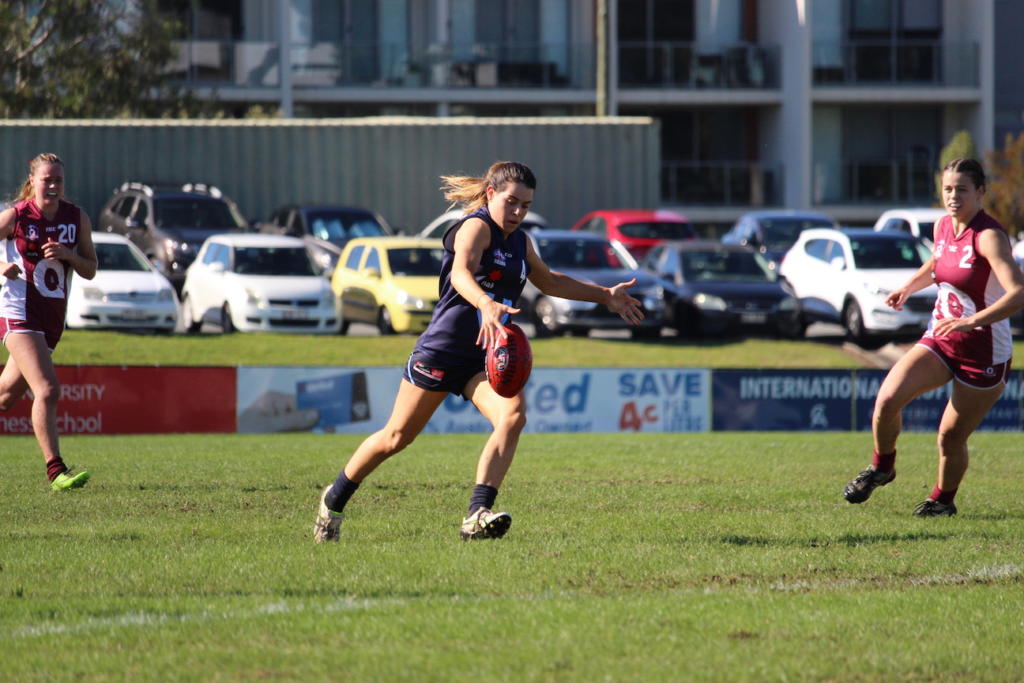 LIKE many other female footballers her age, Nicola Xenos did not have the typical football upbringing. The Oakleigh Chargers player came through the ranks after starting school footy, having wanted to play from a young age.

“I started my footy journey when I was about 11 years old and it was just with the team from school, all my school friends were playing,” Xenos said. “I thought I’d take it up, I always wanted to play it with the boys but I wasn’t allowed. “But that’s where I started.”

The Oakleigh Chargers doubled their wins in 2019, collecting six wins and one draw from 10 games. Xenos attributes the improvement to the team development during the season, and was among a select few from the side selected for Vic Metro in 2019.

“I feel like having a good group of girls you play with and work well with is really effective on and off the field, so I feel like that’s really good in footy.”

As for improvement, Xenos aims to get into more of the contest off the half-back and even head up the ground into the midfield.

“Probably making more of an impact off the half-back line,” she said. “I play half-back and I feel like if the ball doesn’t come down, you’re not having an impact on the game, but using space around the ground to try and impact as much as possible. “I do rotate in the midfield so I wouldn’t say I could go forward, but definitely more time in the midfield I’d love.”

But the peak of Xenos’ season came when her Victorian Football League Women’s (VFLW) side, Collingwood took out the premiership with Xenos showing flashes of her brilliance at both ends. The talented utility is highly rated within the walls of the Holden Centre and the Magpies’ premiership coach Penny Cula-Reid praised the young gun along with a couple of her Chargers’ teammates in the lead-up to the VFLW finals series.

“You see these young 18-year-olds coming through and they’re just bloody superstars,” Cula-Reid said. “You get them when they’re coming off a championships up in Queensland and we’ve got, Gemma Lagioia, Nicola Xenos and Amelia Van Oosterwijck who unfortunately did her ankle, but these are the kids who have been playing high-level football at the highest possible level they can at such a young age and they just bring a completely different dynamic into our team. “We’re just really excited for them and all the other 18-year-olds who are playing through the finals series, and obviously the draft is coming up so no better time to see them in action than the finals series.”

Xenos’ performances across the season earned her a National Draft Combine invitation and has put her name right up into draft calculations. Whatever the future holds, she will just enjoy the moment.