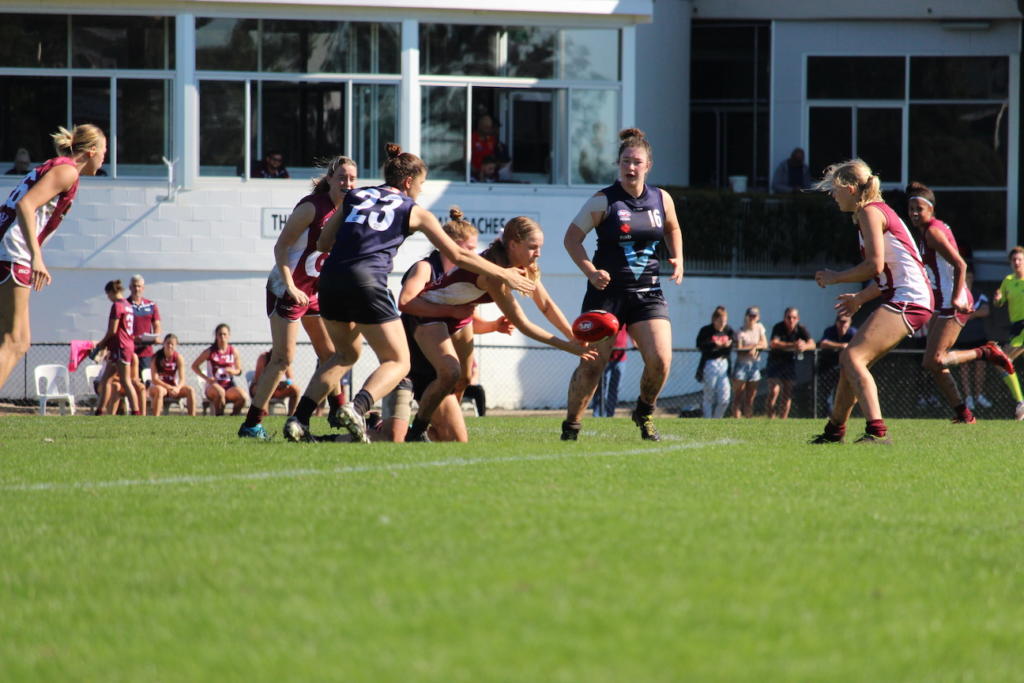 QUEENSLANDER Sara-Jane O’Grady is both honoured and humbled to don the maroon jumper, finally taking her chance to star on the big stage after being sidelined with an ankle injury early on in her footy journey.

“It’s a great opportunity, there’s a lot of talented girls in the AFL and Queensland but not all get that opportunity to be able to show their talent at this level,” she said. “Unfortunately I got an ankle injury playing another sport so I was out for most of 2018 but then I came back at the end and continued playing onto this year.”

Although the injury set her back a few steps, O’Grady worked tirelessly to get her body back to full strength.

“First off it was a bit of a shock because it was my first serious injury and it was a couple of days before I was supposed to go away for rep for AFL so that was a little bit disappointing,” she said. “I just made sure that I was doing everything that the physio said and didn’t push to try and get back. “Now I’m back and my ankle is probably stronger than the one I didn’t do.”

Football was not her first sport of choice, with O’Grady an avid netball player but the lure of Australian rules football was too great. Tempted with the chance to pull on the boots and go for a run along the boundary line the 18-year-old relished the opportunity to broaden her horizons.

“I actually got into it [football] through school,” O’Grady said. “My school team went to states the year before and they came second and then the following year I started and thought I might give it a try. “So I started through school and I joined a club that year which was 2017 so I could get more experience at the game. “I decided that I loved it and chose to continue it,.”

Dedicated to furthering her skills and becoming a prime mover on the footy field O’Grady toiled hard to hone in her craft noting that her “effort to get to contests and chase down (her) player,” are her biggest strengths. While acknowledging that she may not be the biggest possession getter it is her endurance and ability to track her player across the field that makes her such a damaging prospect. Like every young player she still has plenty to learn with her kicking under pressure and game awareness noted as a focal point by the teenager.

O’Grady has made a lot of sacrifices to play the sport she loves. Living up in Rockhampton she spends a fair bit of time in the car travelling down to games and training which can take a toll on any player.

“I know there was like one month where I was in Brisbane every week trying to get to training and games but I guess you get used to it over time,” she said.

With school also a factor it is not easy for the year 12 student managing the balance between her studies and footy.

“It’s quite difficult I’ve had to miss a few school days which has put me behind in school work but I just had to try and catch up and guess juggle it as best I can,” she said.

But the positives far out way the negatives for O’Grady who hopes to one day make it into the AFLW.

“The ultimate goal is to be drafted, that’s probably every girls dream but if that doesn’t happen I’m just hoping to just improve my game and improve my skills,” she said.