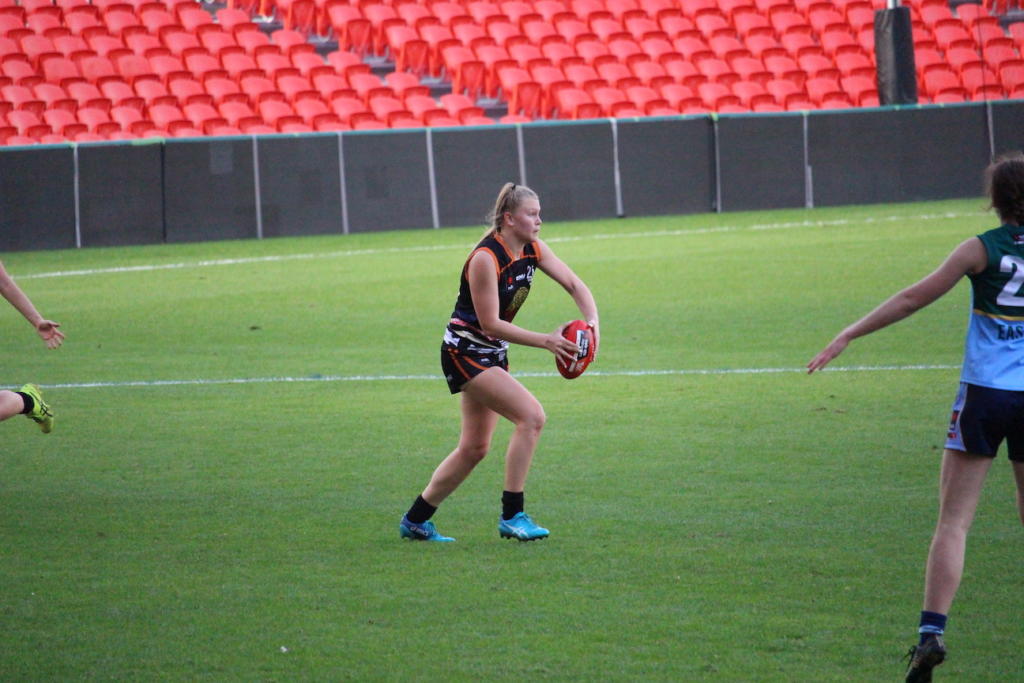 SOUTH Australia-born Montana McKinnon has plenty to be happy about in her sporting career so far, only 18-years-old but playing in representative teams from a young age. Like many other young Aussies, McKinnon started her footy journey as a five-year-old in Auskick before making the switch to netball at a young age.

“I started when I was five, just did AusKick for a bit of fun but obviously didn’t think anything of it,” McKinnon said. “I had a really big netball background, played at a high level – played for 11 years. Then when I hit the age of 14 I found out about football, girls teams and stuff and I wanted to come out and try.”

While McKinnon pulled on the footy boots once more as a 14-year-old, it was only as a 15/16-year-old that she made the full time switch to footy when games started to clash.

“I feel like obviously you need your different skills and stuff but I feel like netball did help, definitely in some ways,” McKinnon said. “I was a defender in netball, ever since I was about 10 so I feel like it did help my defence. “I like the contact as well, netball you’re not allowed to be rough or anything and I love the physicality of the game.”

Despite little footy experience up her sleeve, McKinnon had talent and flair to boot and was granted permission to play in the South Australian Academy from a young age.

“I heard about the state academy, and I knew because I was only 14 I was too young to play in the Under 18s team so I just went out to the academy sessions, thought I’d give it a crack just for a bit of extra training before I went out towards the club level,” McKinnon said. “Then they actually wanted me to come, they got an AFL permit for me to come out so at 14 I played in the state academy for the first time and then I’ve been playing there ever since, they’ve kept me in the team for the past four years.”

While McKinnon has plenty of experience now, playing in the academy at only 14 was a daunting task, especially with the inaugural AFL Women’s season looming.

“It was definitely very scary especially considering that was my very first ever game of football, going away to Melbourne playing against NSW,” said McKinnon. “Especially a few months after hearing the names called out at the draft, there’s been some big names that played in that team who are now off all over Australia playing for all different clubs in all different states.”

Named Most Valuable Player for the Central Allies in the 2019 AFL Women’s Under 18 Championship, McKinnon puts her work ethic down to constantly wanting to one-up her own form and create opportunities for her teammates.

“It’s really special to represent the Central Allies, considering especially how big football has now become. Obviously a few or more years ago it wasn’t as noticed as it is now but yeah it’s really special,” McKinnon said. “My ultimate goal is to get drafted after this, hopefully even if it’s next year, in five years time, just definitely work on it for a few years and see where it takes me.”

McKinnon has been touted as the standout ruck prospect in the 2019 AFL Women’s Draft, with her ability to not only impact the ball in and around the contest but also find opportunity to clear the ball out of stoppages and set up key plays for her side.

“I think my marking and my aerial contest would be my biggest strength,” McKinnon said.

As for improvements, she said ground ball gets are the ones to work on.

“Definitely my ground balls, because I’m a tall player and it’s a struggle to get down,” she joked.

Meanwhile, it’s family both on and off field that makes McKinnon tick with her biggest inspiration coming down to her parents and teammates.

“Probably my parents, they’ve always been there supporting me and have helped me out along the way … all the teams and all the girls it’s such a great bunch. Each team is different and it’s like they become your family, it’s pretty cool.”