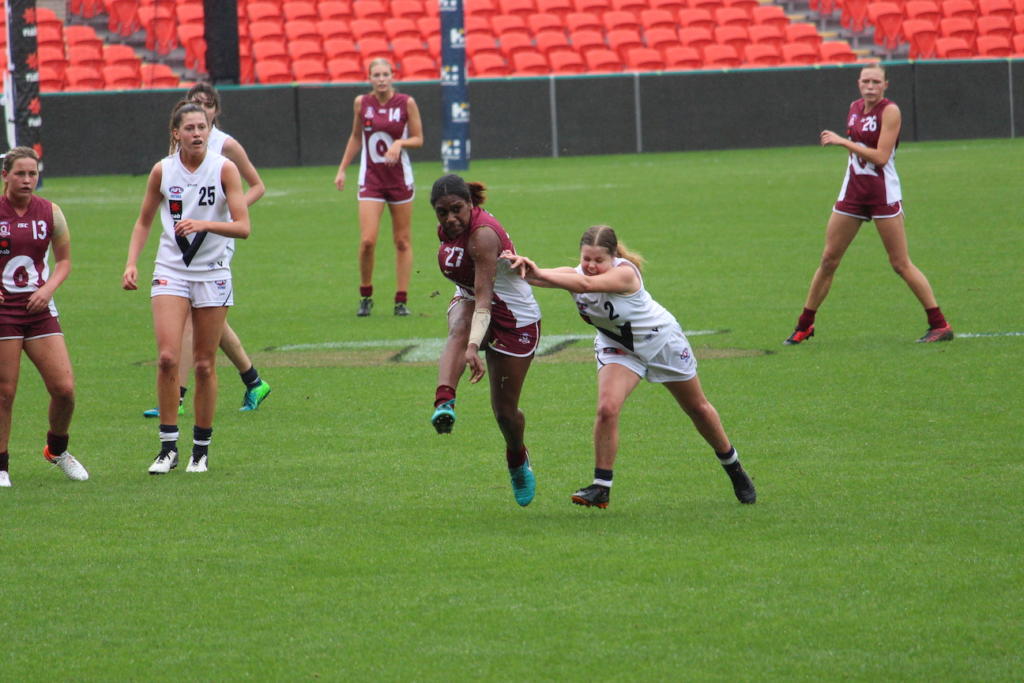 WHEN Gold Coast SUNS announced a trio of Under-18 players as pre-signings ahead of next year’s AFL Women’s competition, they covered all bases. With Charlotte Hammans covering the defence and Ellie Hampson being the inside bull, it was the third signing of Kitara Whap-Farrar that added the extra pace and X-factor on the outside. The Cairns talent with an athletics background was injured during her bottom-age championships, but it was clear what she offered to her Queensland side and the SUNS saw it too, showing no hesitation in guaranteeing her future with the club. It was quite a journey for Whap-Farrar, but now the elite level is edging ever so close.

“I’m an Aboriginal Torres Strait Islander,” Whap-Farrar said. “I’m from Cairns, I recently moved down to the Gold Coast about seven months ago for AFL. “I started off as a sprinter, so I wasn’t an AFL player the whole time. “I was a sprinter since the beginning I guess. I was introduced to AFL by my dad. “I needed a time through sprinting, I was at that point where it was just track, so my dad said try and do a team sport. “So him having the AFL in his blood, he said try AFL out. “I guess I tried AFL out a bit. “Wasn’t competitive until about four/five years ago. I guess I just fell in love with it the moment I played.”

Growing up in Cairns, it was not the most convenient place for the growth of future AFL Women’s players with the Academies being developed down south, but Whap-Farrar was not deterred by the travel.

“I wasn’t born in the Torres Strait,” Whap-Farrar said. “I was bred and born in Cairns. “But I guess the transition from Cairns to Gold Coast, it was all new. “I only just recently graduated. “My family and everything I know is all up in Cairns so I kind of came down to Gold Coast from scratch. “(It is) all kind of nerve-wracking, finally being out in the world. “It was all nerve-wracking, but I guess I just took it day-by-day.”

Her love for the game from that first moment has not wavered and helped her adjust to the ever-changing landscape of her life which has seen her move down in search of her AFL Women’s dream, something that has been achieved with the hard work still in front of her ahead of pre-season. Crossing over from athletics, it was difficult at first, but the discipline required at an individual level helped Whap-Farrar maintain standards for her team sport.

“I guess for me coming from an individual sport, it was more having a team,” Whap-Farrar said. “So being individual I was training, making myself accountable. “Making sure I eat right, I trained right. “It was all about just me. “But coming into the team sport I loved it more because being on the camps, you met more people. “Some of my best friends are from the other side of Australia. Some of my closest friends are from WA and South Australia. “I guess just making the bond around Australia and just meeting new people and knowing that when you train you just don’t keep yourself accountable, but your teammates keeping you accountable as well.”

It is no surprise that speed is her greatest weapon in her game, and she knows she is able to exploit opposition players with it.

“If there’s an open space and I see the opportunity, then I definitely do take it with both hands and just take the ground,” Whap-Farrar said. “I like to think my ground balls, not on a wet day, but obviously on a nice, hot day. “My ground balls are pretty good through the contest.”

Her next focus is her endurance, which is something she will strive to improve ahead of the AFL Women’s 2020 season, as well as her aerial contests. Her rise to the top of Queensland football has not been without a massive amount of support, from her football-loving father through to her whole family and coaches.

“There’s obviously my family,” Whap-Farrar said. “My mum, my sister, my two little brothers and Brett Kennerley was one of my first coaches. “He kind of introduced me to it. “He’s one of the people who’s not in my family that I should be thankful for, because he saw the talent in me when my family didn’t see it in myself. “He’s probably someone outside of my family that I’m thankful for, that has been a major part of my AFL.”

As for a mentor or inspiration that is currently running around in the AFL Women’s, Whap-Farrar knew just who came to mind.

“I love Leah Kaslar,” she said. “She was one of our coaches last year for Queensland and she’s also a great backliner. “Just the way she carries herself on and off the field she’s a great leader. “She’s just someone I really look up to.”