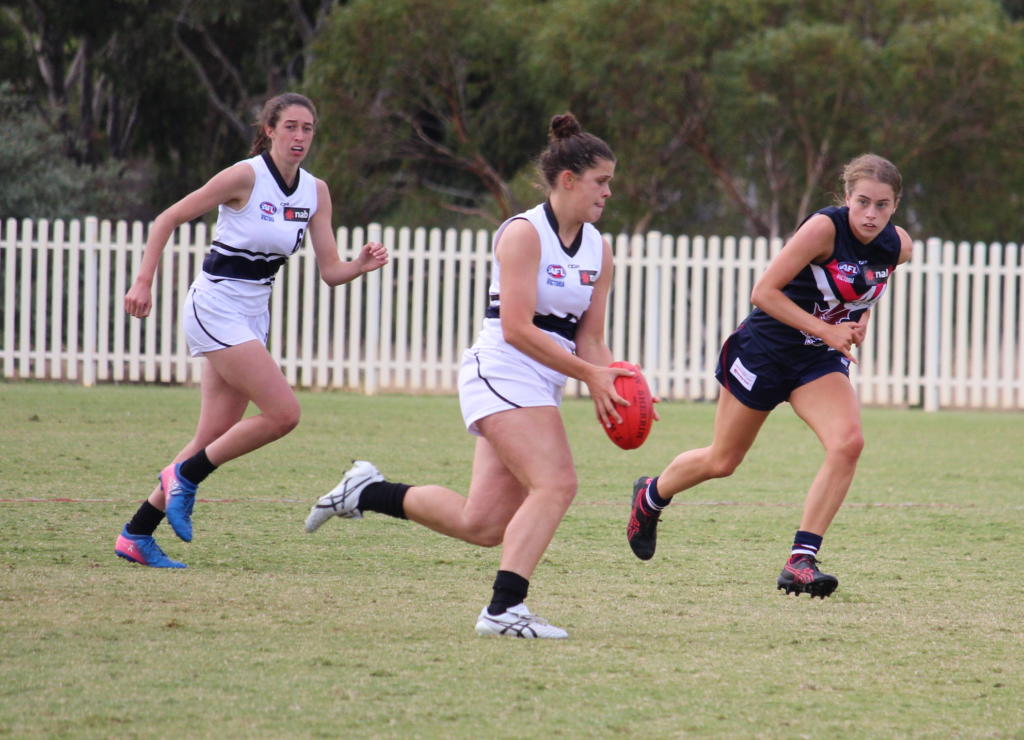 FOR most top-agers, the prospect of juggling their final year of school with elite level representative football is a difficult reality. Not for Nell Morris-Dalton, whose journey to this point has been a touch less orthodox than some.

The Northern Knights and Darebin Falcons forward is a step ahead of the competition, currently in her first year of a university nursing degree, allowing her to narrow her focus and “step up (her) game to a new level.

“I think (being at university) made a huge difference this year, allowing me to focus on my footy a bit more,” Morris-Dalton said. “Even when I’m not doing footy I’ve got a lot more free time to just do things that I want to do, so I think that makes a big difference for my enjoyment of footy.”

The enjoyment factor has long been at the forefront of Morris-Dalton’s footballing story, with the Fitzroy junior opting against playing with the boys at a young age because their reluctance to tackle her made it “a little too easy.” But when the Yarra Junior Football League (YJFL) started up a girl’s competition, Morris-Dalton jumped at the opportunity to get back into the action.

“When the girl’s (league) started up at the YJFL I didn’t really look back from there,” she said. “I started at Fitzroy and then my first interaction with the youth girls (pathway) was at the Calder Cannons, and then I obviously got re-zoned when the Knights opened up a team.”

Morris-Dalton’s development at the Preston-based club has been steep, culminating in a top-age season which saw her average 12.6 disposals and 1.4 goals from her 11 NAB League games, highlighted by seven goals across two huge finals performances in the premiership-winning Knights side. The 174cm prospect’s form is something she says took time, coming on the back of a bed of belief and united team environment.

“I think I had a lot of pressure in the first half of my season and once I realised how I play well and worked out things in my game… my confidence started to build and obviously with my confidence building my game kept building too,” Morris-Dalton said. “This year we had a good group of girls and I think what made a huge difference was we were really close so everyone got along really well and it meant that on the field we could just connect well and understand each other’s gameplay… I really enjoyed my time at the Knights. “It was obviously perfect to finish off with a premiership especially in my top-age year and coming off the (grand final) loss the year before.”

Her big game performances meant Vic Metro selection was a relative given, with Morris-Dalton continuing her scoring streak to boot goals in each of her three outings during the national carnival in Queensland. The experience proved another chance to play among a rich team spirit.

“Vic Metro was also really good, I think the big thing about that team was all the girls weren’t playing for themselves and that really showed,” she said. “Everyone on the team connected well and the linkage of play was just really good so it was fun to play in that team with heaps of good girls.”

The theme only continued in Morris-Dalton’s five VFLW games for Darebin Falcons, an historically monumental and “empowering” club which she said was the perfect next step.

“I love Darebin… obviously being all-female, I think that was perfect and exactly where I wanted to go for the rest of my season. “I just really like the club, the whole community vibe of the club is really good and I enjoyed playing with bigger bodies and learning off some of the girls in the team. “Lauren Pearce has been helpful to me, just teaching me a few tips in the ruck and forward line, giving me advice. “It’s the same with Elise O’Dea, just giving me advice about the next level with what it takes and everything.”

The next level is approaching quicker than ever before at this point, with just the National Draft Combine and draft day separating Morris-Dalton from her AFLW dream. She is keen to get through the short period of the unknown.

“We’ve obviously got the combine coming up so that’s my goal at the moment, just to try and test well there. “(I’m) just looking forward to the draft and getting some idea of what I will be doing next year – that is a bit of a hard part of it, it’s all very unknown so I’m pretty excited just to get into it… anywhere I’ll be happy with, but I don’t want to get any ideas in my head and then be disappointed at the end of the day.”