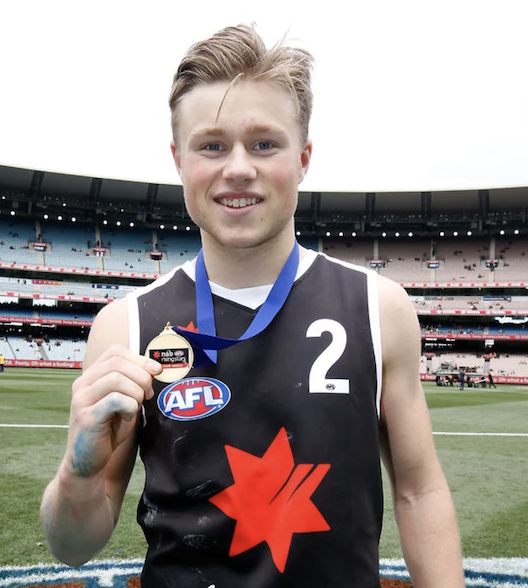 THE top talents in next year’s AFL Draft crop stepped up in Team Brown’s thumping 47-point win over Team Dal Santo in the Under-17 All Stars game at the MCG. Despite a close first half, Team Brown ran away with it in the second and did not look back making the most of their opportunities with Sydney Swans Academy prospect Braeden Campbell awarded Best on Ground for his efforts following his 14 disposals and three goals.

Team Brown started with a massive flurry of goals, prompting some onlookers to no doubt wonder whether the game would end up a blowout. Campbell was prolific in the opening couple of minutes winning a number of touches and kicking a great goal on his left out of a stoppage to open the account. It was fitting in a day where the big, big sound from the west of the town was MCG-bound, it was Western Jets’ excitement machine Eddie Ford who got going early, receiving a handball from Jake Bowey, with Ford booting a second later on from a stoppage close to goal. In between Ford’s two majors, Blake Coleman laid a massive tackle close to goal running down an opponent and then converting the set shot. With Team Brown 24 points ahead, Team Dal Santo finally clicked into gear with Henry Smith booting a much need goal for the white side. When Henry Walsh received a gift off a marking contest and put it through, the goal was paid and by quarter time, the margin was back to 11. Ford was the most prominent in the opening term with the eight touches and two goals, while Will Phillips’ work on the inside for Brown was superb to rack up seven, while for Dal Santo, Alex Davies and Nathan O’Driscoll both had six apiece.

The second term continued on from the momentum flow that Team Dal Santo had built late in the first, with pocket rocket Corey Durdin snapping on the outside of his boot for the first. Shortly after, Errol Gulden ran onto the easiest of loose balls thanks to a brilliant double-tap from Ollie Lord. When Jackson Callow used his strength and smarts to recover in a marking contest and snap around his body, Team Dal Santo were suddenly seven points in front. Facing a deficit and the game starting to get away from them, Team Brown got up and about with Riley Thilthorpe snapping around his body using his terrific athleticism for a big man, but just hit the post, with Reef McInnes doing the same thing from a set shot. Soon Elijah Hollands broke the drought with a goal in the nineteenth minute mark to end the five consecutive goals added by Team Dal Santo courtesy of a great snap close to goal. Jamarra Ugle-Hagan marked in space and had a kick after the half-time siren to put his side in front, but his long-range drifted to the right. Team Dal Santo headed into the break with a two-point lead, turning a 24-point deficit midway into the first term around. Davies and Ford both headed into the break with 13 touches apiece, while Hollands (eight that term) and Finlay Macrae (seven that term) really lifted. Meanwhile O’Driscoll and Phillips were busy once again for their respective sides.

Up by two points at half-time, Team Dal Santo worked hard to regain some composure but simply could not match Team Brown who went on a scoring spree. Team Brown worked the ball down the field with ease opening up space with consecutive handballs and overlap run with a clever inboard kick landing in the hands of Noah Gribble who made no mistake slotting it through the big sticks and handing his side the lead. Team Brown continued to mount pressure locking the ball inside their forward 50 with Campbell getting on the end of it and banging it through the goals off a step around the body. Phillip worked in overdrive to win the ball at the coalface and while also showcasing his physical presence with his strong tackles and smothering defensive pressure to try and shut down options. Campbell provided plenty of excitement throughout the third term dashing through the middle of the ground, off loading and then receiving the footy just outside 50 to ping it through the goals for his second in the term. Gulden worked relentlessly down in defence trying to propel the ball out of defensive 50 but it was not enough to stop the flow of Team Brown. Hollands flexed his muscles with a thumping goal from beyond 50 to push his side 23 points in front then backing it up, winning the clearance and pummelling the ball forward to provide another opportunity inside 50 with Phillips the beneficiary with a snap around the body. Joel Jeffrey continued to pile on the pain for Team Dal Santo adding another goal to the tally while Joel Western stood up under pressure for Team Dal Santo working hard to move the ball out of defence.

With one quarter to go Team Brown seemed to have the ball on a string and continue their forward momentum. McInnes released a centring ball in the forward 50 with Coleman selling a bit of candy and running into an open goal square for his second major for the game. Oliver Henry showcased his class to read the flight of the ball and take a strong intercept mark deep inside Team Dal Santo’s forward 50 and slot the first goal of the second half for his side. Bowey (22 disposals) got up high taking a huge mark on the wing and using it cleanly with McInnes reaping the rewards and bagging another goal, the talented forward relished the extra space sliding out the back and adding another major to cap off an impressive display. Team Brown displayed class and composure moving the ball down the field with ease starting with Campbell down back breaking through the midfield and releasing a neat kick to Phillips (21 disposals, 14 tackles) who then hit up Jeffery lace out to establish a commanding lead. Despite the mounting Team Brown pressure Jack Carroll did not let up slotting a nice goal to reduce the lead and show some fight for the team in white. Josh Treacy showed his class with a strong grab deep inside 50 and made no mistake putting through his first goal for the game. Team Brown seemed to have an answer for everything combatting Team Dal Santo’s every move with class, precision and composure. Davies manoeuvred his way in the forward 50 to break free of the tackle and snag a goal for Team Dal Santo which was quickly followed by a Joshua Green goal to reduce the margin back to 41 points. But, unfortunately it was a little too late for Team Dal Santo with the game all but done and dusted credit to a third quarter blitz from Team Brown.

Campbell was one of a number of standout players on the day, with Team Brown captain Hollands having a big day through the midfield with 24 touches, five clearances, four inside 50s and two goals, while Ford finished the day with 20 touches to go with his first quarter goals. Phillips (14 tackles) was remarkable defensively to go with his 21 touches, while Bowey picked up 22 in a strong effort. Gulden stood tall for the losing side to give Swans’ fans plenty to smile about with a goal from 19 disposals and six inside 50s, while Alex Davies had 18 touches on the day. Zavier Maher was also productive through midfield, as was Macrae, and Western in defence.