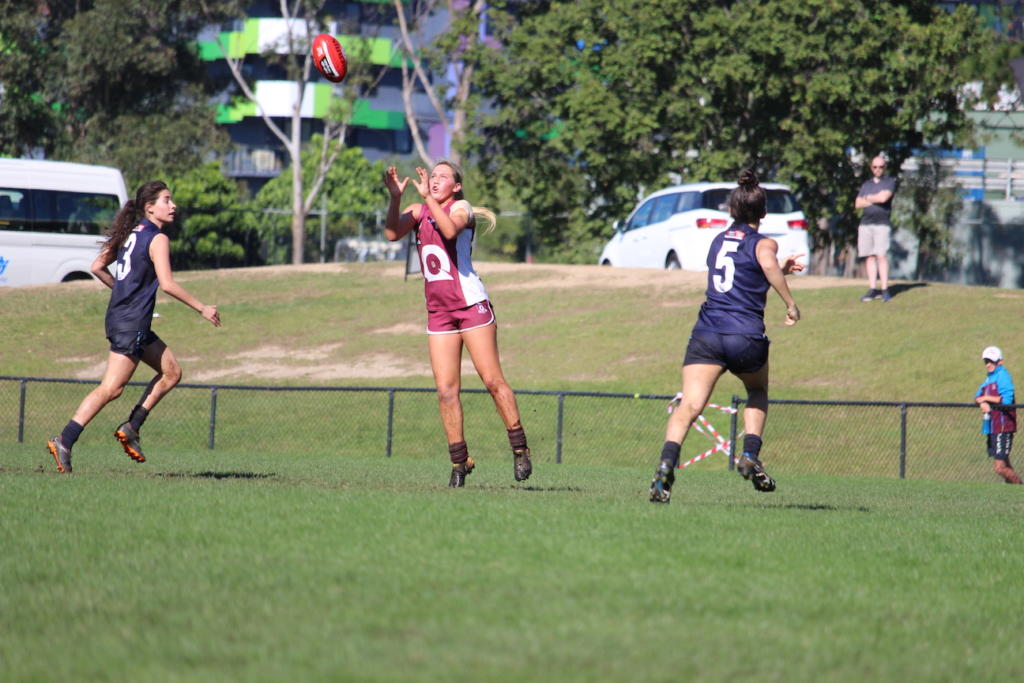 PLENTY of AFL Women’s draft hopefuls move to further their Australian rules football career, but not too many do so unknowingly, which is what makes the story of Queensland’s Dee Heslop so unique. The versatile utility hails from New Zealand, with the Kiwi having no idea what the rules were when she first started, having to adjust to things like handballing when she kept throwing it to teammates.

“I’m originally from New Zealand,” Heslop said. “So I moved here in 2012, and started playing footy at Grade 7 at school. “It was just a little cup I ended up playing and I just progressed from there through club and a few more teams. “Then I also used to play netball, then that started to clash as well, but otherwise just kept going on playing more footy and more footy and then getting into more teams and really enjoying it so I ended up having to choose one of the sports, so I ended up choosing footy over netball and honestly I would never go back to it.”

Heslop admits when she first took up the sport, she was pretty naive when it came to rules or the way it was played.

“I thought it was more like touch, really,” she said. “But otherwise, we played nine-a-side. “That’s how we started it off, and then they were teaching me how to handball instead of throwing it. “But obviously I didn’t have any clue what it was back then.”

Her choice to pick football over netball was mostly due to her ability to run across the open field, rather than have limited boundaries where you can move such is the case in netball.

“I think you just go from running around on a massive field and you’re on a field with heaps more people where on a netball court you’ve only got seven on a side so that was a bit different and not having boundaries where to run,” Heslop said. “Where in AFL you can run wherever you want which is a big difference.”

Despite picking up the sport and achieving dreams of representing her state that few could imagine in such a period of time, Heslop understands the journey is far from over.

“It’s obviously been a really hard journey,” she said. “Being here in my final year is obviously really exciting. “Going through all the programs and year-by-year and now it’s my draft year, it’s the biggest year for an 18-year-old and it’s just really exciting to see how it pans out.”

Heslop said the pressure was on for her, but she was “going okay” with it.

“I’ve just been focusing on 18s as much as I can and going by each game, by each day,” she said. “After this obviously don’t know what’s going to happen so just see how that goes, so otherwise really good.”

While the Gold Coast SUNS Academy member has played in multiple positions, her preference is the midfield given her strengths, but she admits she is happy to play anywhere.

“I think the biggest strength that I have is maybe my work ethic and making the second and third efforts and tackling pressure,” Heslop said. “I’m very lucky to be a versatile player, I can play through the mid, forward or back wherever they need me.”

As for her biggest inspiration on her journey from New Zealand to the elite levels of Australian rules football, it was a no brainer.

“My mum and dad,” Heslop said. “We would not have moved over here without them thinking – the reason we moved was mum and dad wanted a better lifestyle for me and my older brother – so that was a massive help. “But otherwise, Craig Starcevich was a big help. “He looked at me when I was very young like five years ago and he’s obviously pushed me through the programs and also through Suns. So Michael Gugliotta, Tim Searle, so just coaches like that have been really helpful as well.”

On-the-field, Heslop’s role model is a player who loves the contested work as much as her.

“Definitely on a Queensland level, it would be Emily Bates,” Heslop said. “I played club with her as well and she helps me through my games and she tells me where to go and I just look up to here and try and do what she does I guess and even when I verse her, I try and match up on her and see how I go against her.”

Now with a National Draft Combine invitation and two Queensland clubs in the running for the top draft talent, Heslop is close to achieving her dream of running out for an AFL Women’s side.