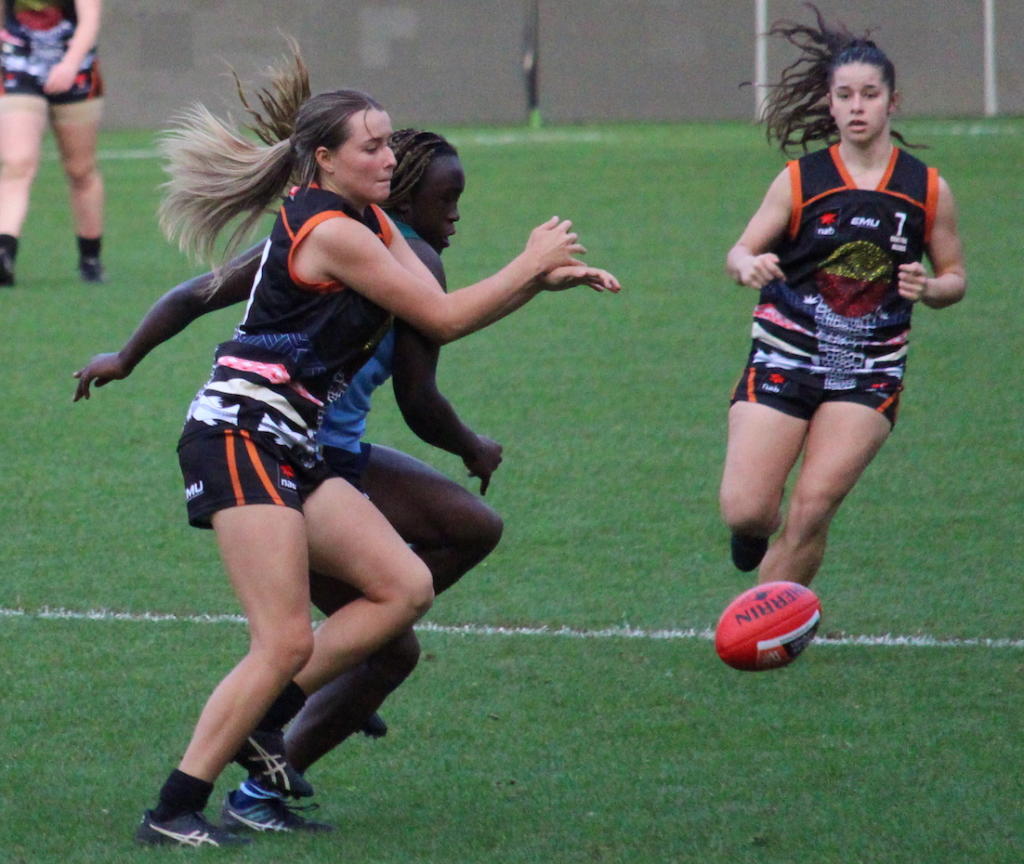 THE rise of Australian rules football in the Northern Territory won over former soccer player Bella Clarke, to the point where the versatile tall co-captained Northern Territory at the AFL Women’s Under-18 Championships. Clarke initially joined the sport because of her family driving her to pick up the oblong-shaped ball, but she stayed because of the freedom she had on the field.

“I think I first started when I was in about Year 9,” Clarke said. “Basically I kind of just started because my family were like ‘oh give it a go’. “I was originally into soccer and it kind of just changed over and eventually it went from soccer and AFL to just AFL and just kept developing from there.”

“I think it’s (change from soccer to football) more you can do to develop your game,” she said. “So in soccer there’s one position you’re good at and that’s kind of it, where in AFL you can go anywhere you want and you can move and help your team in completely different ways. “Learn to be more courageous and keep on developing.”

Clarke said being a latecomer to the game, she is still trying to develop a variety of skills to improve herself on the field, which is why she is 100 per cent driven off it to learn as much as she can and be the best leader possible for her teammates.

“I like my leadership skills and I like my leading patterns and efforts but I would like to say marking or kicking (are my strengths) at the moment, but I’m just not 100 per cent there yet and I want to keep developing my skills. “Those short penetrating kicks you always see the men’s players do and it’s like ‘oh I want to be able to do that’ so I just want to keep practicing those kicks, and the long distance ones as well. “Obviously contested marks, that’s always something I’m trying to work on. “Being a tall player that’s a key skill to have.”

The flexibility of being able to move around the ground and play in different positions is certainly not lost on Clarke, who enjoys key roles up either end of the ground.

While it has since been announced that the Northern Territory Thunder sides will wind up their programs in order to focus on junior development further, Clarke said it was a pathway and program that helped her and a lot of others come through. Especially when it came to the championships, teaming up with the South Australian players to form the Central Allies.

“Definitely yeah (Thunder helping the female pathway),” Clarke said. “I think having the girls, so linking with SA does really help us with developing our skills. We’re a bit secluded in the NT. “We have our own different playing style and then SA is completely different, so we learn from the down south footy style, and it’s good to combine with them. “We take a leaf from their book, they take a leaf from ours, and I think it’s really, really helping NT girls with Thunder especially.”

The “different” playing styles are hard to describe, but Clarke said there is a clear distinction between the way the games in the NTFL, and SANFL are played. But it gives juniors who compete in both competitions the best of both worlds.

“In the Northern Territory it’s very fast paced,” Clarke said. “We tap the ball along, picking it up, taking a couple of steps and going for goal, that’s how I imagine Territory footy. “And then SA is a lot more composed. “You’ll stop, look for the next player, change angles.” Both states are very contested teams though so always really good with their tackling.”

With the AFL Women’s Draft approaching, Clarke has just been focused on playing her best footy this year and continually developing with one particular inspiration in mind – her NTFL captain, Lateesha Jeffrey.

“I would have to say my biggest inspiration would be my captain at Southern Districts, so my local club,” Clarke said. “She recently got into the Thunder, she’s been moved into the Thunder VFL program and she’s captain of that program as well. “She’s always reaching out to me and she’s just such a good leader and such a good role model. “She’s always committed to the team, she’s always committed to footy and she’s definitely someone I look up to and she doesn’t feel intimidating at all. “She’s one of those players you can approach any time, she doesn’t think she’s better than anyone else and she’s definitely someone I looked up to.”