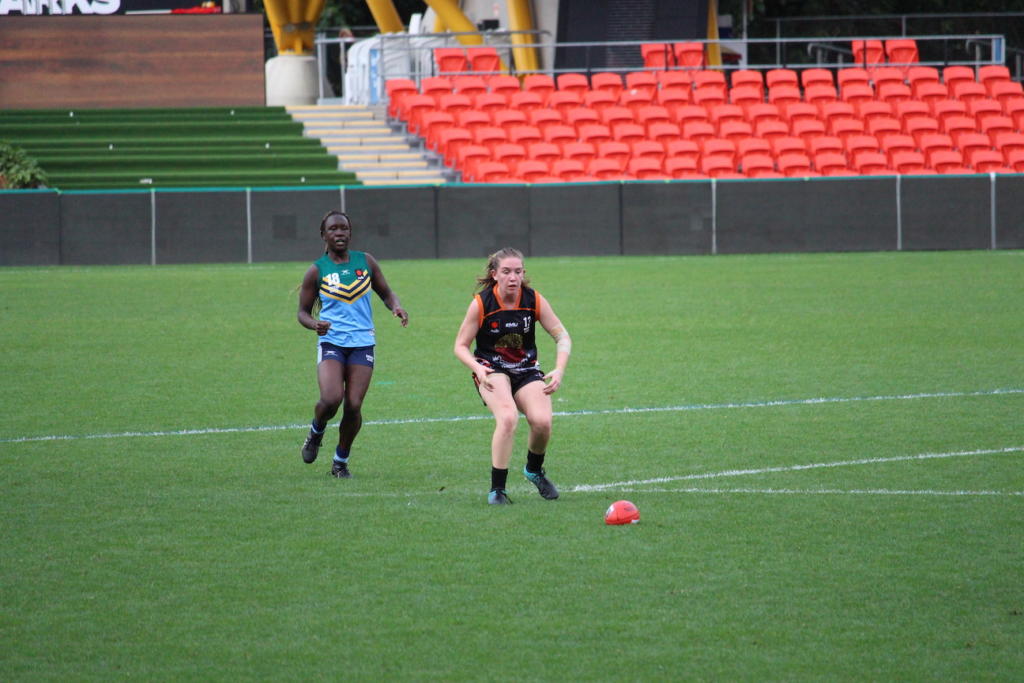 UNLIKE many of her peers, Kiana Lee has been lucky enough to spend plenty of years in the Australian rules football pathway. Initially joining her brother in the sport as a six-year-old, Lee went on to play more than 100 games before being identified as a clear footballing talent by Woodville-West Torrens in the South Australian National Football League Women’s (SANFLW).

“My older brother who played footy when he was six. He played for Rosewater Football Club and I thought it would be fun to go out there and give it a shot with the boys, and I did,” Lee said. “I ended up playing longer than he did. “Played there until I was 14 and I was no longer allowed to play with the boys. “At that point AFLW wasn’t a thing so I didn’t have anything to do with footy after that for a year. “As soon as I heard about AFL footy, I went straight back and I set goals and I strived to make it to the AFLW. “Played at Henley Sharks for a year and then played at South West Lakes and have played there ever since. “I’ve also played SANFLW for the Woodville-West Torrens and got the chance to play state footy.”

Lee was a part of history when the Eagles made their debut in season 2019, running out for Woodville-West Torrens as they played out their inaugural season in the SANFLW.

“It was definitely good,” Lee said. “I really enjoyed it, the team environment was very good. Everyone was really close and supportive of each other. “It was lots of fun to rock up to training and just see all your friends. “Get better and improve. “Obviously we didn’t get a win, but that doesn’t matter to me. “I enjoyed what the team environment was like and had lots of fun.”

Lee has not let adversity get in the way of achieving her goal of being drafted into the AFL Women’s. She was disappointed on missing out on the Central Allies side as a bottom-ager in 2018, but made up for lost time in 2019, booting four goals in both of her games for South Australia against the Northern Territory to book her spot for the AFL Women’s Under-18 Championships.

“It was definitely something I wanted to do last year which I didn’t make the team, but I wanted to improve and hopefully make it this year which I did,” Lee said. “Happy to achieve that and it’s been good. “The team’s also very nice and we’re all as a group from different states we’ve come together, we’ve won one, lost one which was good.”

The humble Lee said kicking the bags of goals was a “pretty good feeling” but credited her teammates with their work up the ground for her to “polish” off their work. A feeling she is used to playing up forward as the focal point for the Eagles in the SANFLW.

“Yeah I like kicking goals and the feeling of kicking a goal and finishing off my teammates hard work,” Lee said. “Just getting around the girls was really good.”

Like many forwards, Lee said she is still developing the defensive side of her game but is keen to build in any areas she lacks to become the most complete player possible.

“I definitely think I need to work on my tackle pressure and defensive pressure from a forward perspective,” Lee said. “Definitely my attitude towards the game (too), not dropping my head and just keeping going as the game goes along.”

With dual AFL Women’s Best and Fairest winner Erin Phillips as her inspiration, Lee said reaching the highest level to play alongside or against Phillips was the clear goal.

“Yeah my biggest dream ever,” she said. Now it is a game of wait and see, but whatever the future holds for Lee, you can be sure she will not stray too far from the game she loves.