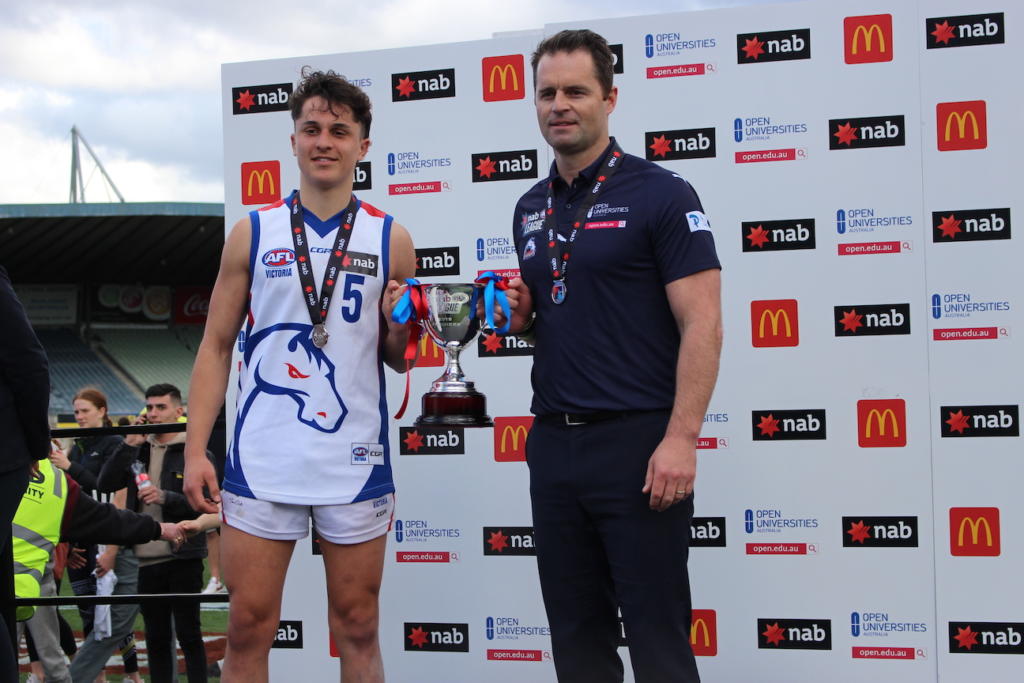 OAKLEIGH CHARGERS won their fourth NAB League premiership in eight years on Saturday after trumping minor premier Eastern Ranges by 53 points at Princes Park. As is always the case with premiership teams, there are series of stories to tell and this very special team is no different. Here is the story of Oakleigh’s 2019 grand final win, in pictures. 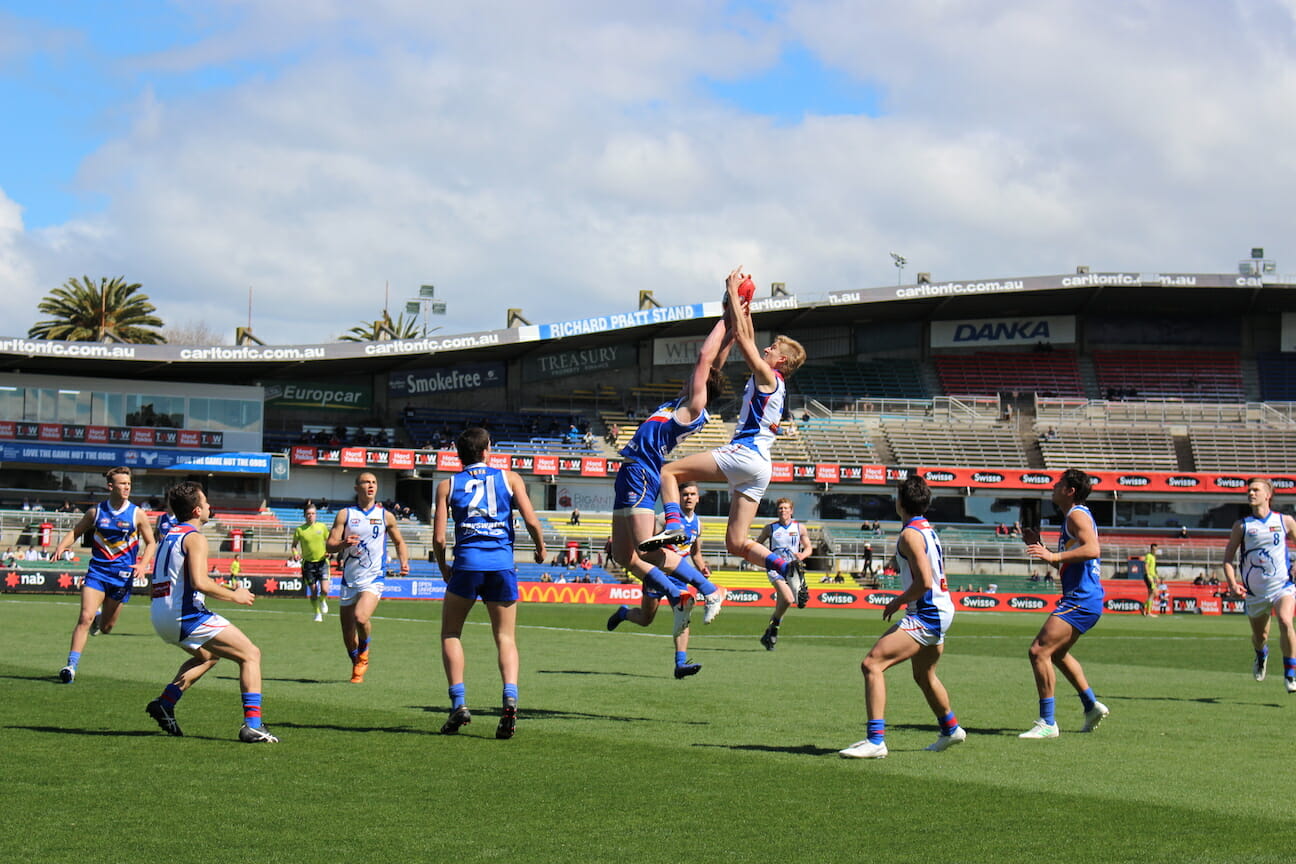 I can only imagine that one of the more rewarding things about coaching kids in the elite talent pathway is when they show everyone else the talent you have seen in them all year. Nick Bryan really came into his own during finals and started the decider on fire with 10 disposals. This was just one of his high flies in the opening term. 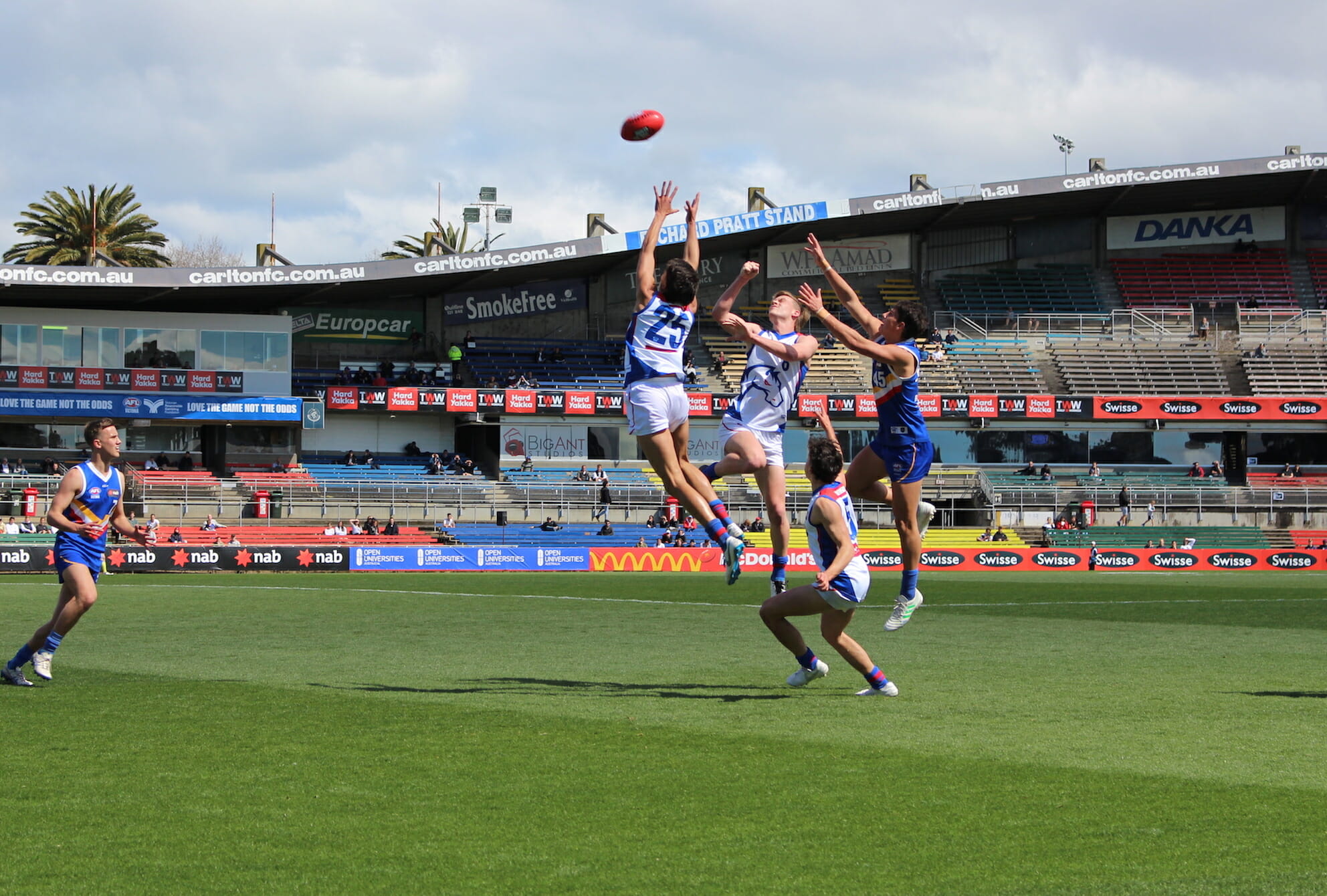 Speaking of high flies, there are very few players who do it better than Jamarra Ugle-Hagan. What a rare talent; the leap, sticky hands, authority in his walk after a big mark, and fluent set shot routine. It wasn’t quite his day, but he looked like tearing the game to shreds early on. 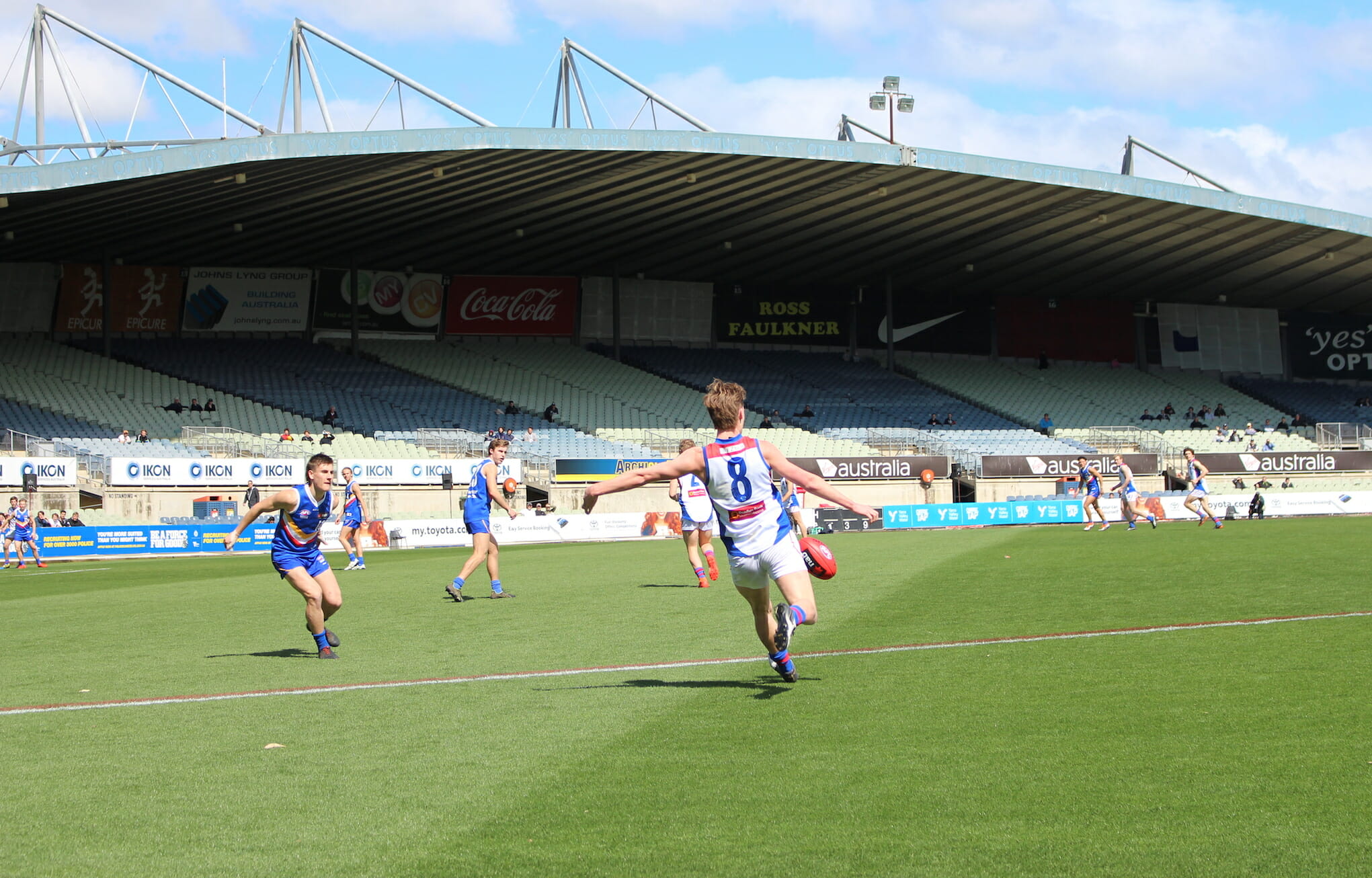 Speaking of authority, enter Noah Anderson. He marked just inside the arc and on a ridiculous angle here. You wouldn’t back many to make the kick, but you just felt there was always a chance he could bomb it through. While it wasn’t to be, his top 3 draft hopes are sure to come to fruition. 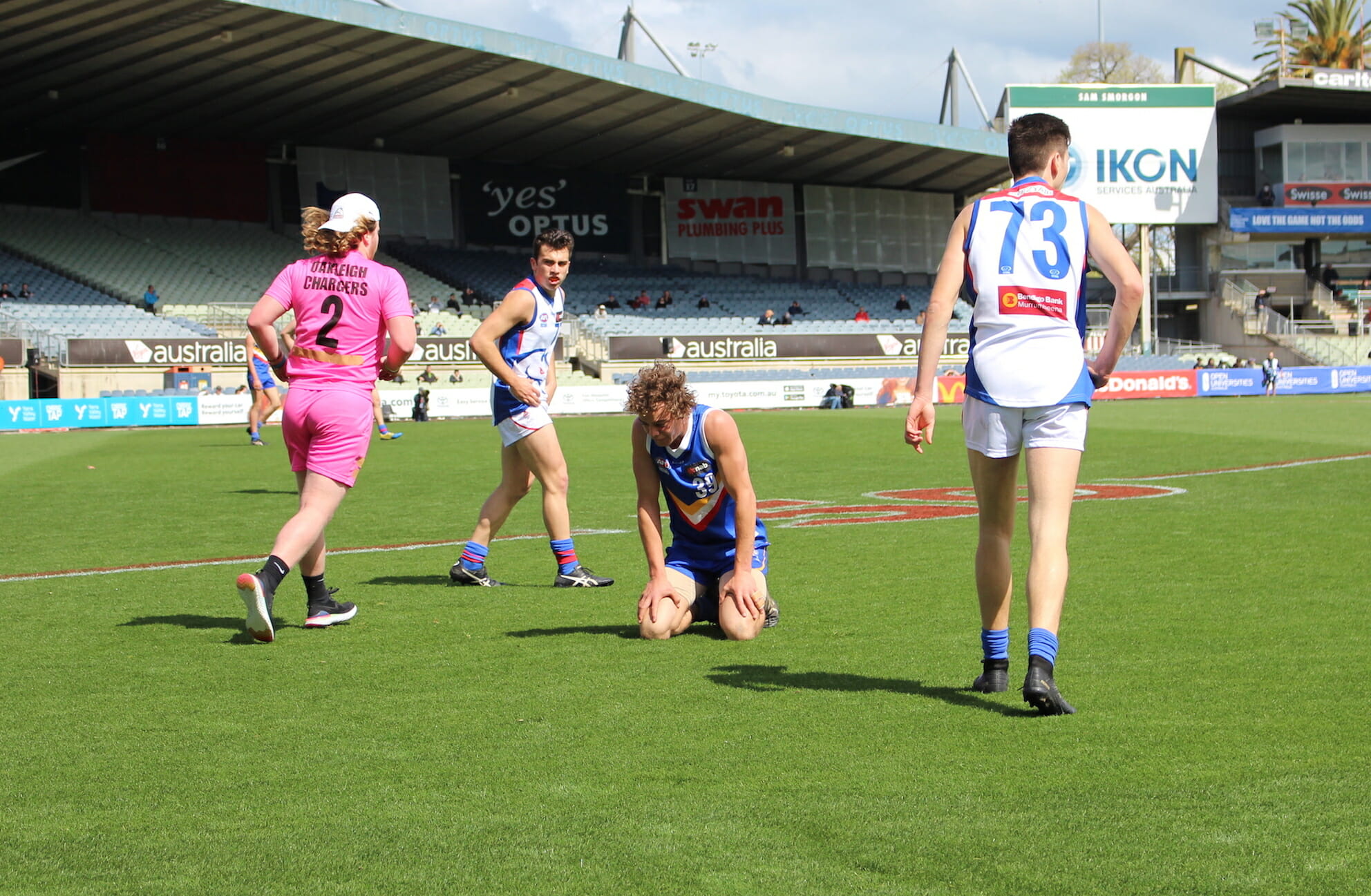 Joel Nathan, a rock in defence. He had just been crunched by Ugle-Hagan here and soon went off for a concussion test, but came back on and was as brave as any of the Ranges players for the rest of the match. Huge effort. 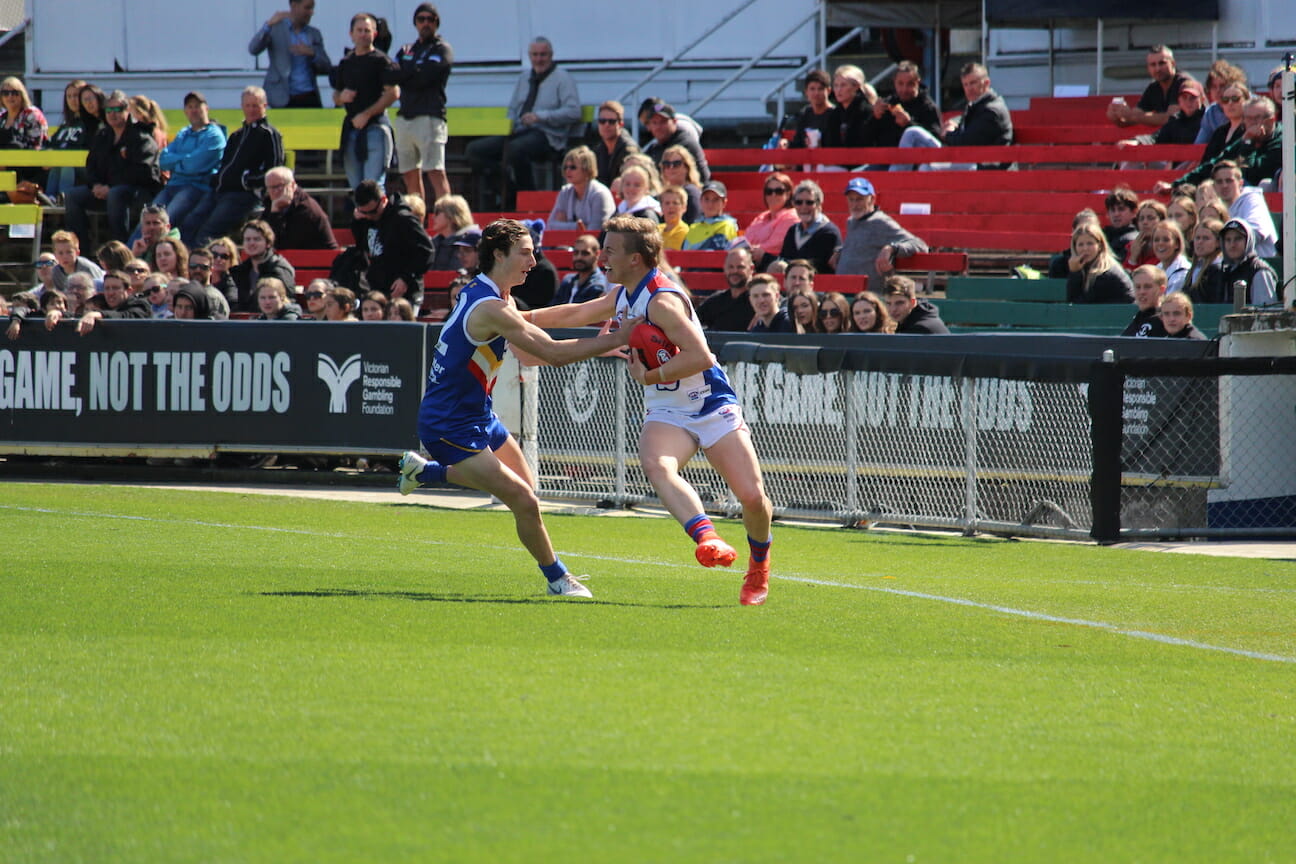 A famous B. Lawry could always be heard saying “it’s all happening”. Bailey Laurie‘s name is spelt a little differently, but you get the idea. That’s how he plays, all action and a game winner with his line breaking ability. We’ll get to see it all again next year, too. 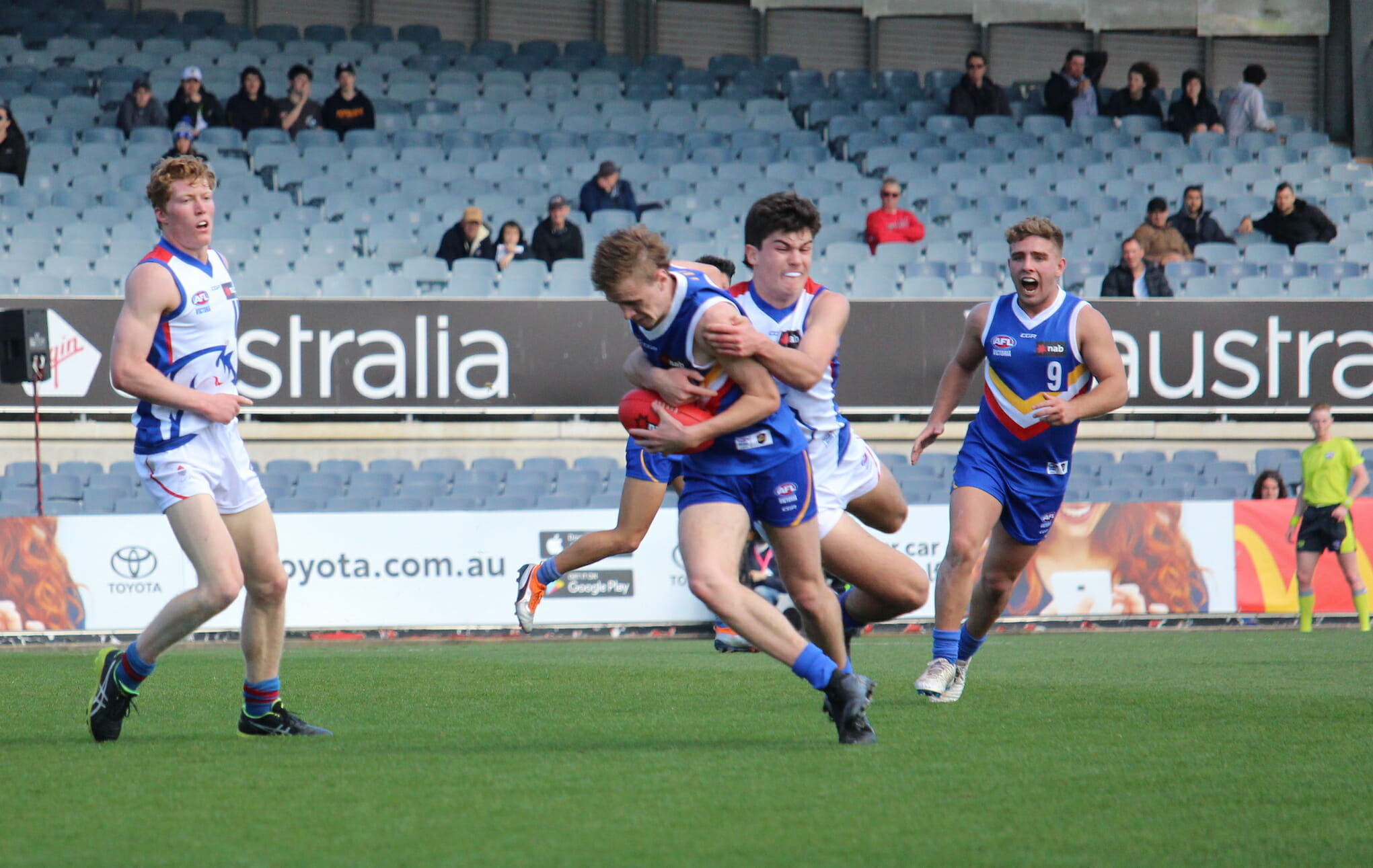 This was the essence of Oakleigh’s game. Glamour and Hollywood plays aside, the Charger’s forward pressure is what helped fold Eastern in the third term. They just couldn’t keep up.

It might look a touch awkward but this was a terrific goal from Joshua Clarke, it looked a real team-lifter. He has made a habit of slotting goals from deep on his left side, but is more typically a rebounding force from defence. Great pace and dare. 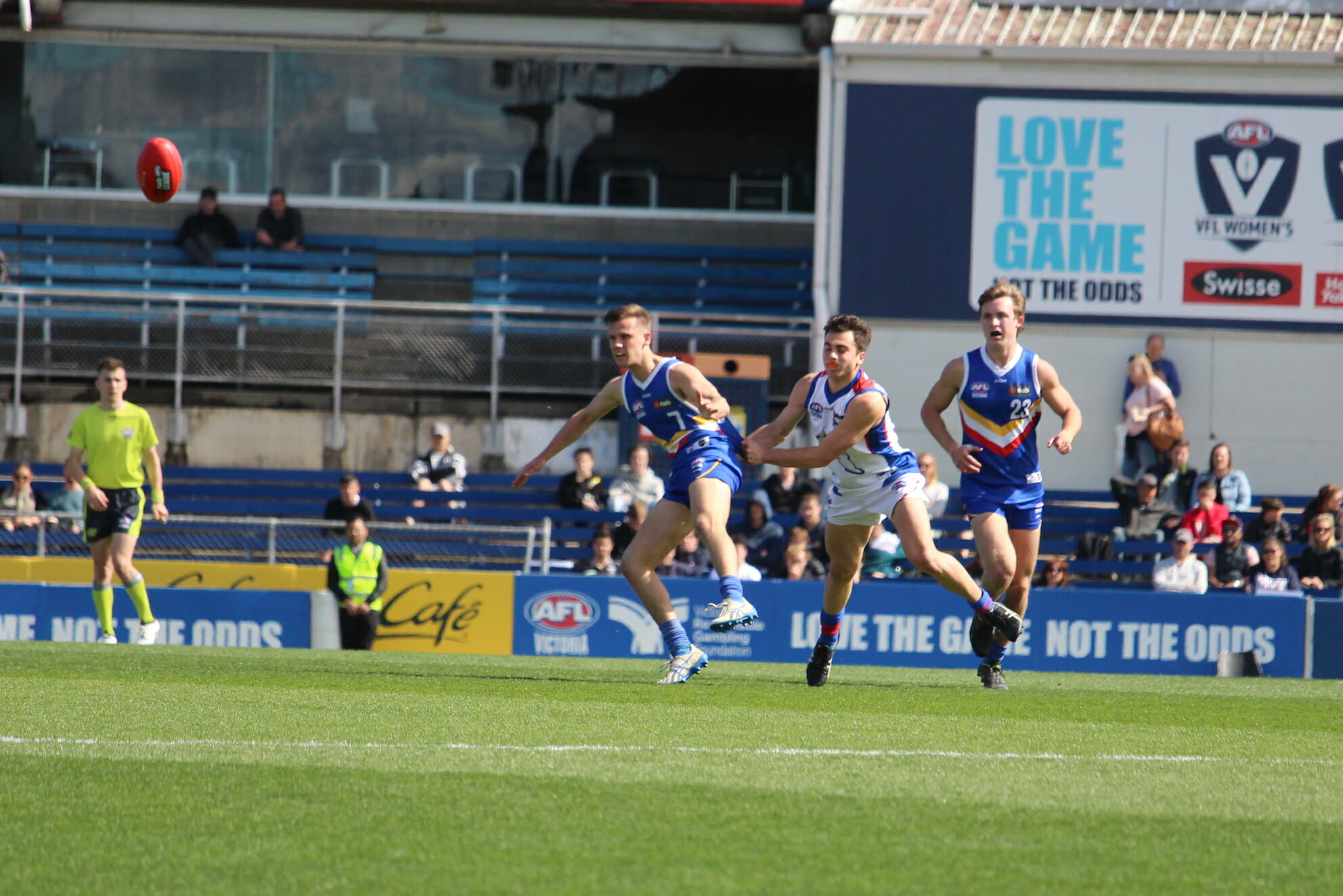 Arguably Eastern’s best draft prospect, Lachlan Stapleton was right with Clarke in his second term exploits. He’s such a hard worker and enjoyed an ultra-consistent year from midfield.

This kid is a ripper. The skipper, Trent Bianco. He took the reigns in the back end of the year with co-captain Dylan Williams out injured and led his Chargers to the flag. Eastern put everything into stopping him, they beat him pillar to post and had Mihaele Zalac – who he turned in this bit of play – paying him close attention. He still managed to get off the leash and rip up the outside. 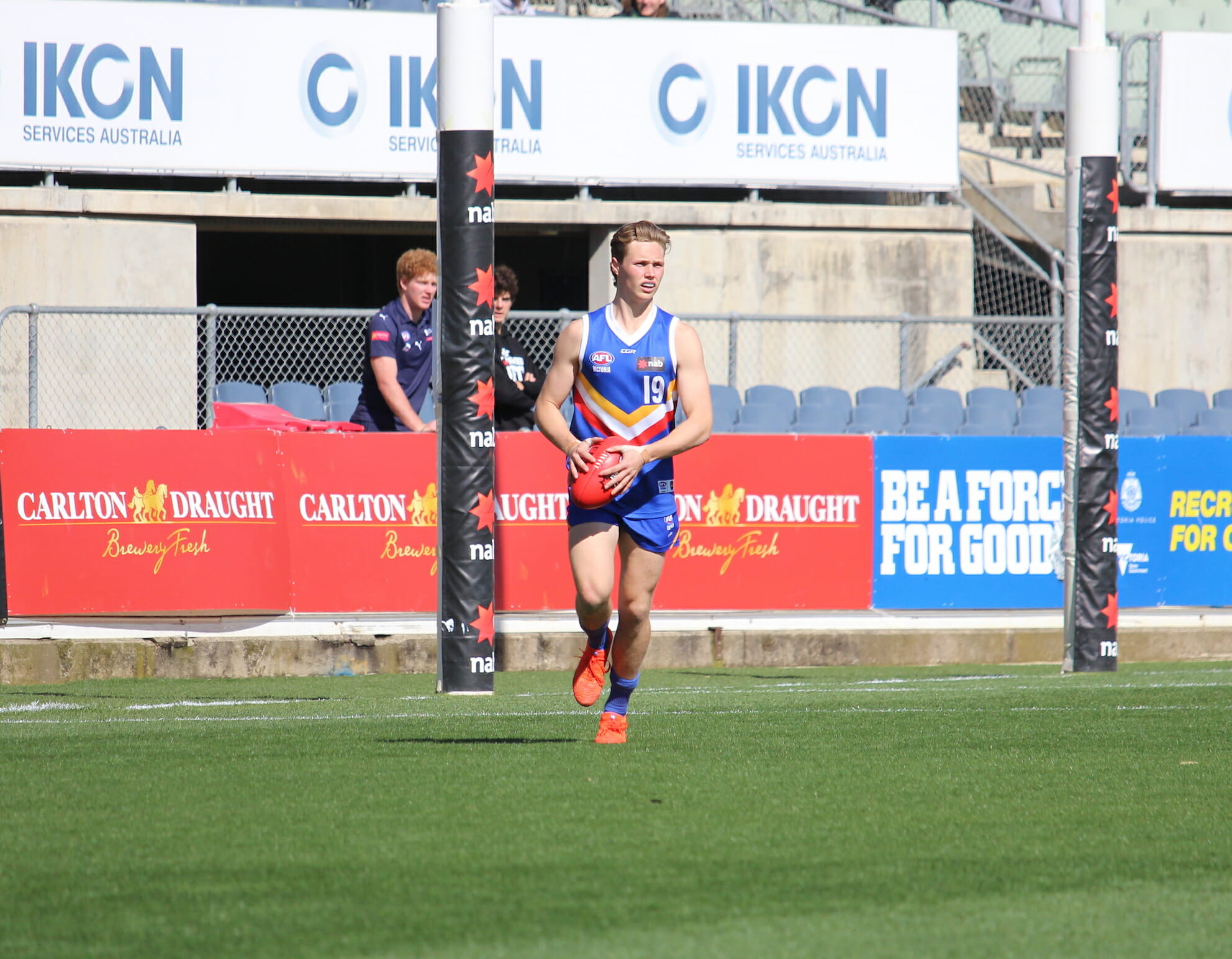 Write the name Wil Parker in your notes for next year, he and Clarke will be an enjoyable half-back duo to watch. He had a couple of daisy trimmers, but was otherwise sound on the ball and went back to take some important intercept marks. 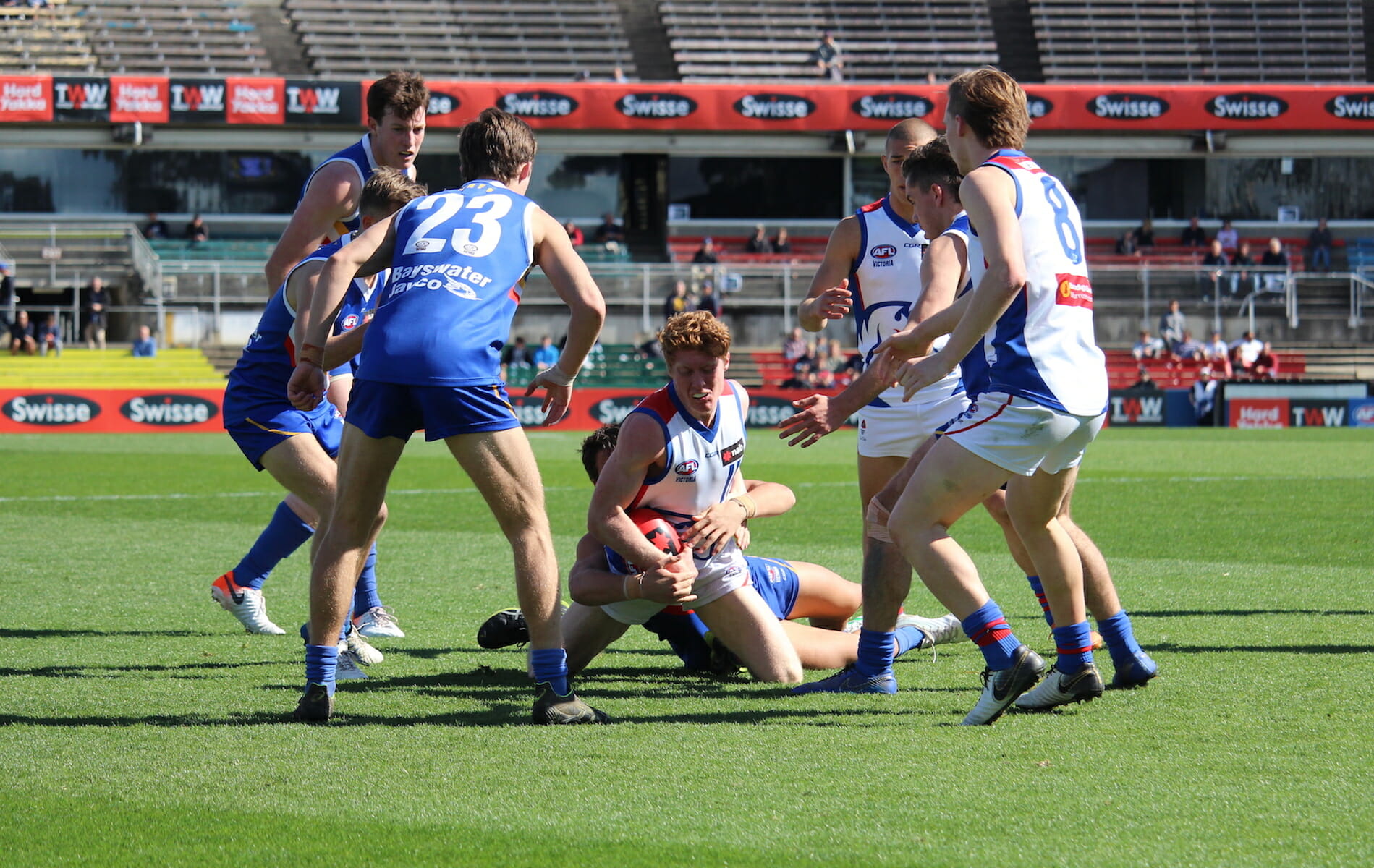 We might talk about his 60-metre goal on his non-preferred side after the fact, but this image is more typical of Matt Rowell. Not the whole getting tackled part, but how he is always at the bottom of the packs, ball in hand, and attracting a raft of opponents. Gun, and the obvious number one. 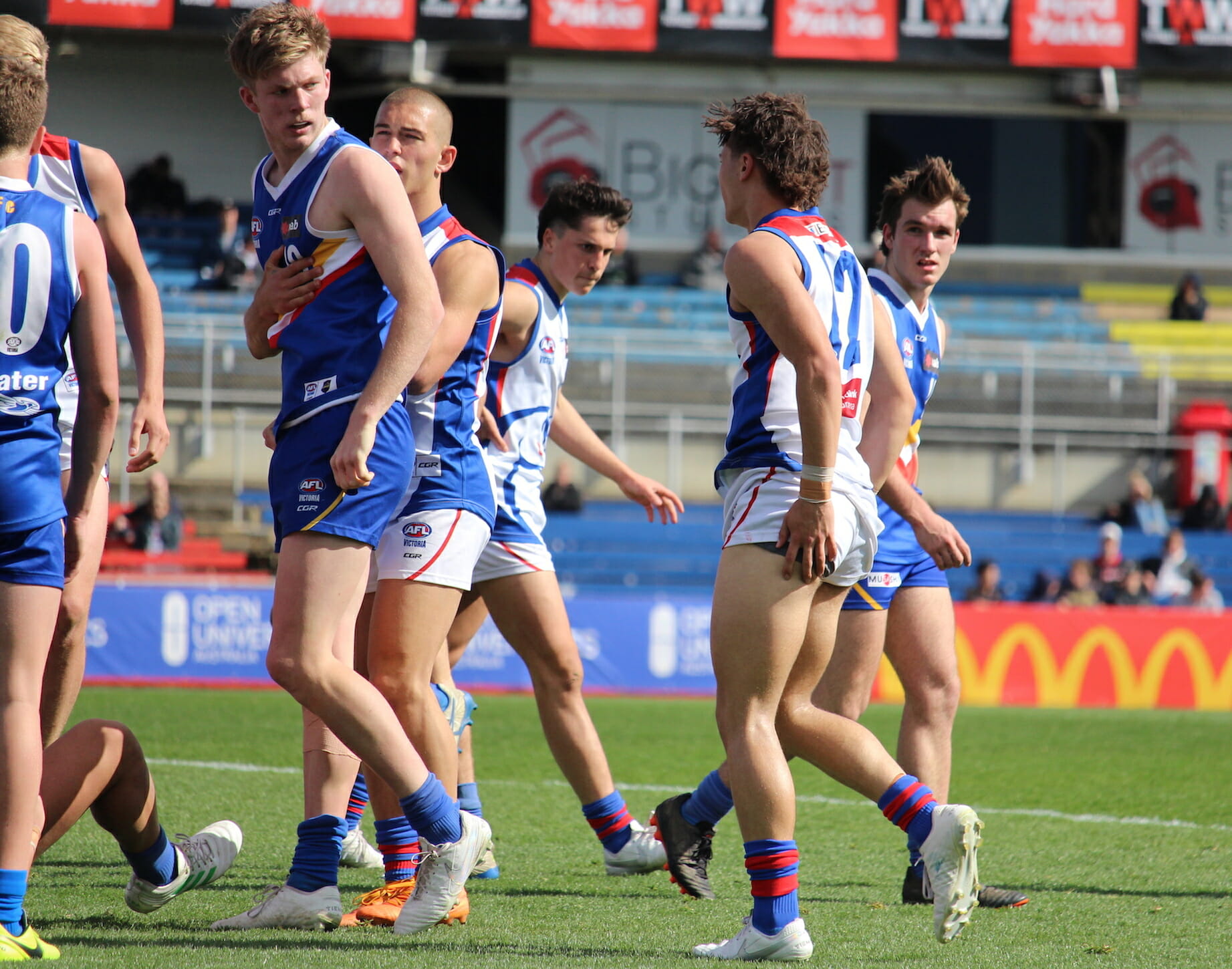 I’m not sure what Lochlan Jenkins said here, but fair play to Will Phillips for keeping the peace. 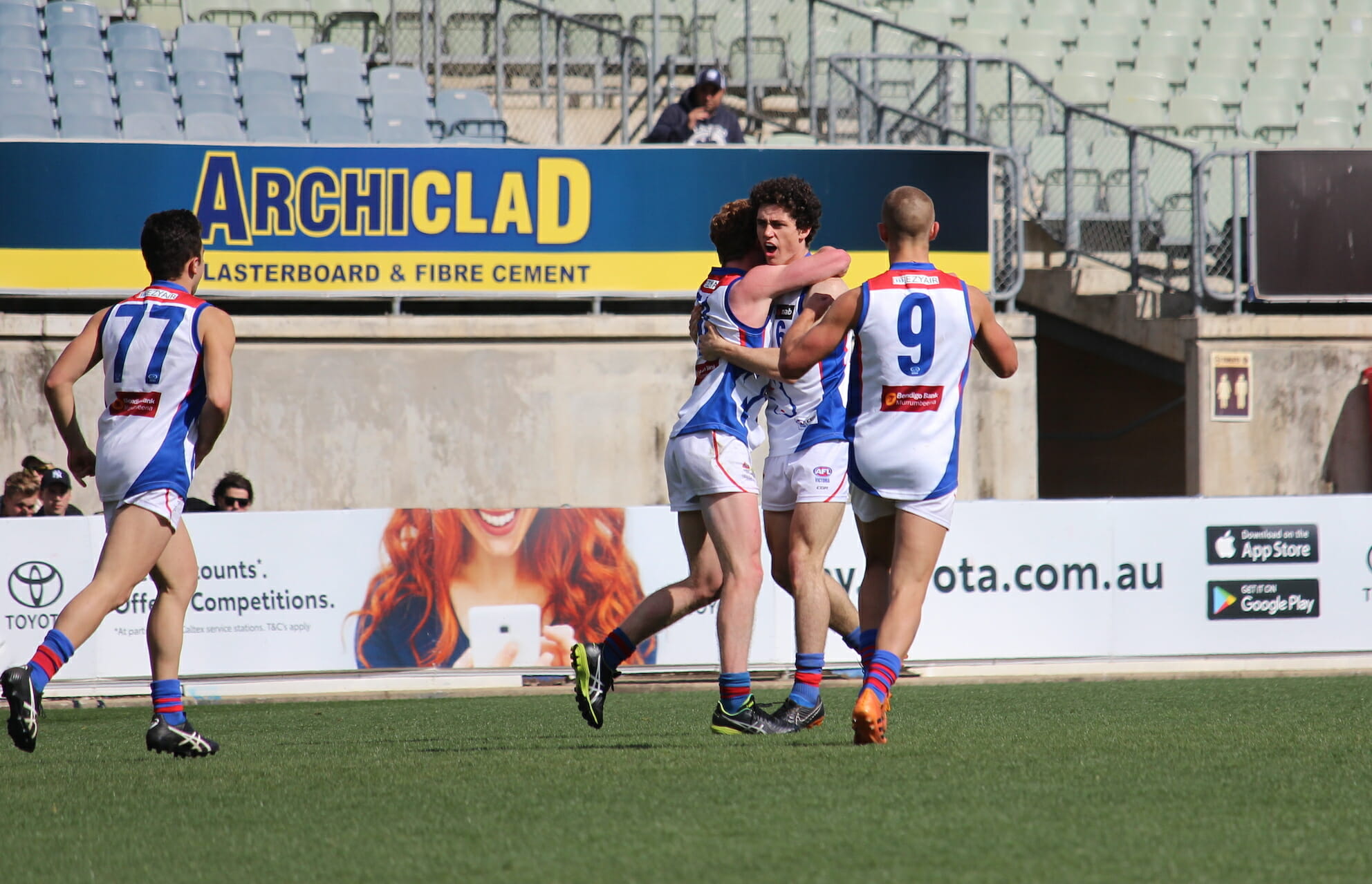 Get around Jeromy Lucas! A game changer in the premiership quarter.
Just ask coach Leigh Clarke; “Full credit to him, he came out and kicked three goals in that quarter and started to turn the game for us. “That was exciting and credit to the coaches in the box, that was a discussion that was brought up in the box, we back the boys in the box and pulled the trigger on that and I think it was a key moment.” 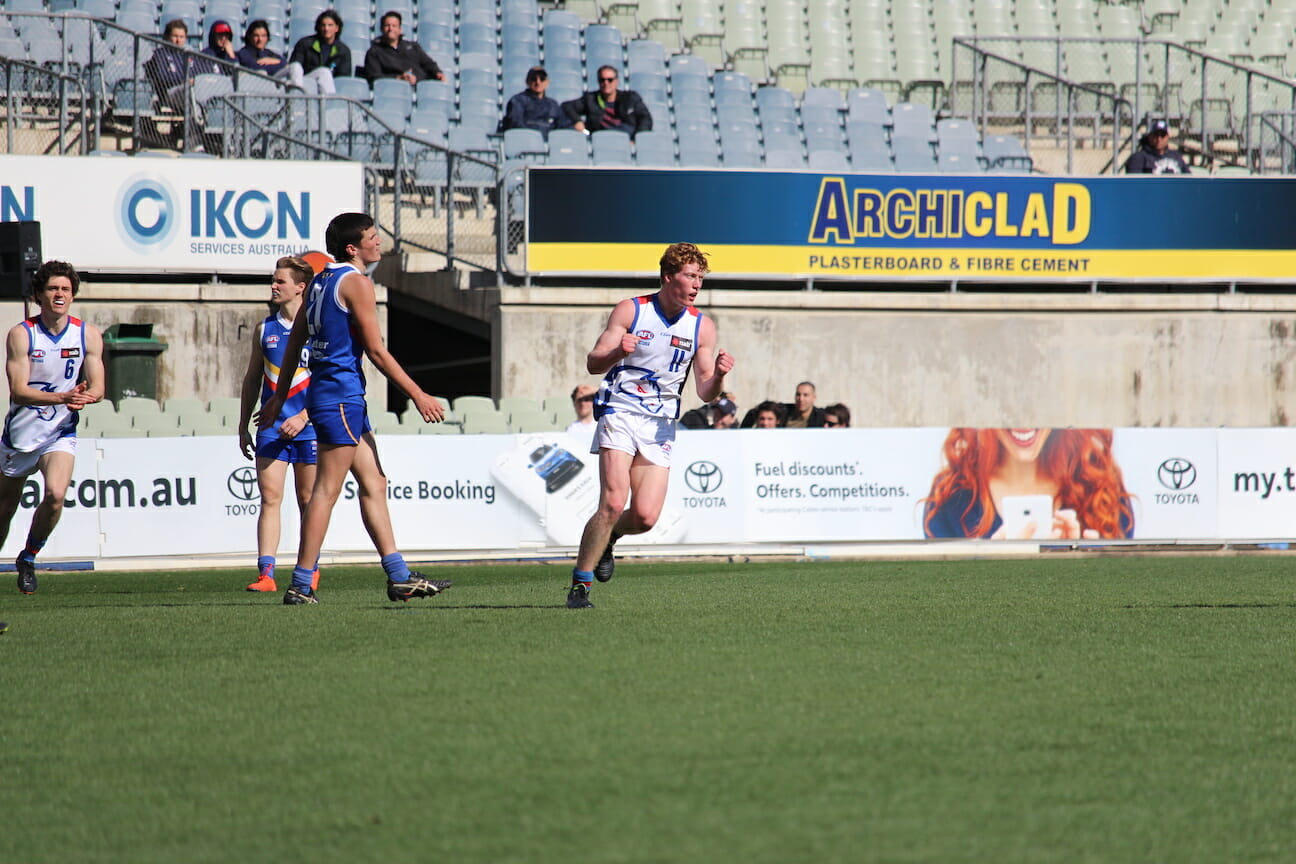 “The true modesty of Matt, we encouraged him over the past month to really celebrate a goal, he said at best he’d give us a thumbs up.” – Leigh Clarke 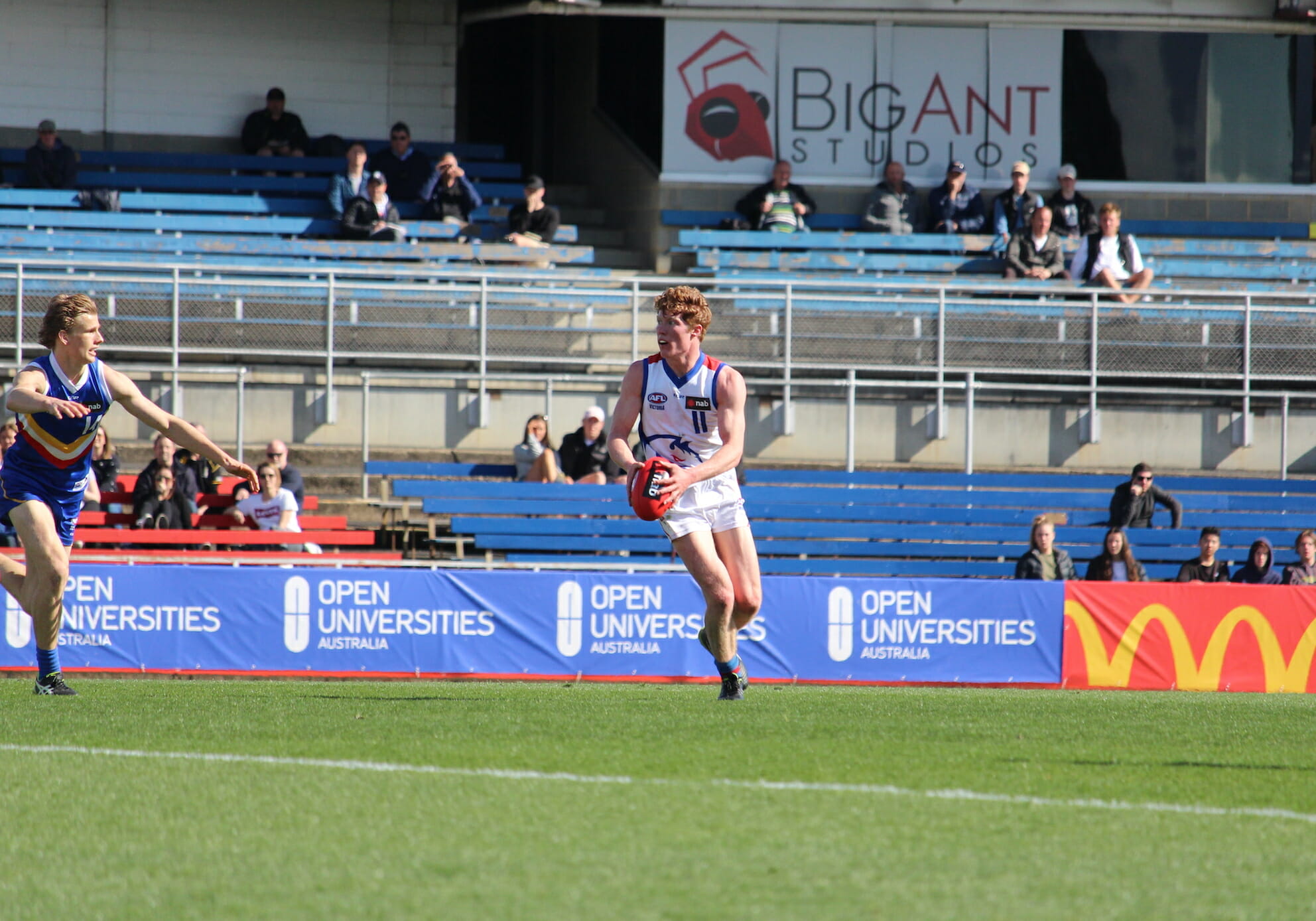 I know, another photo of Rowell. This, just before he booted that 60-metre goal on his left foot.
His secret? Practice, and a bit of luck.
“It came off sweetly, I didn’t think it was going to go that far but it just ended up sailing through,” he said. 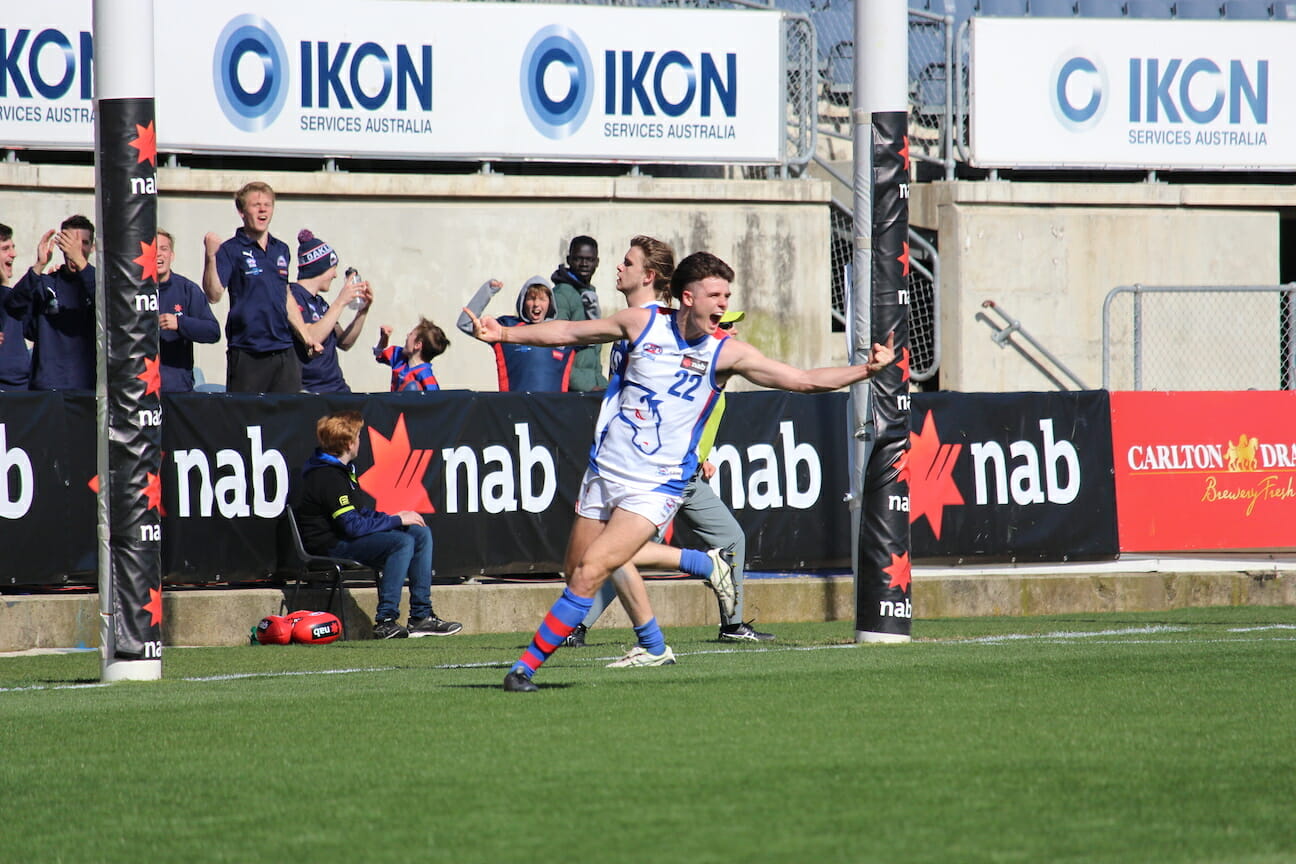 Doesn’t seem that Thomas Graham needs any invitation to celebrate a goal. Scenes. 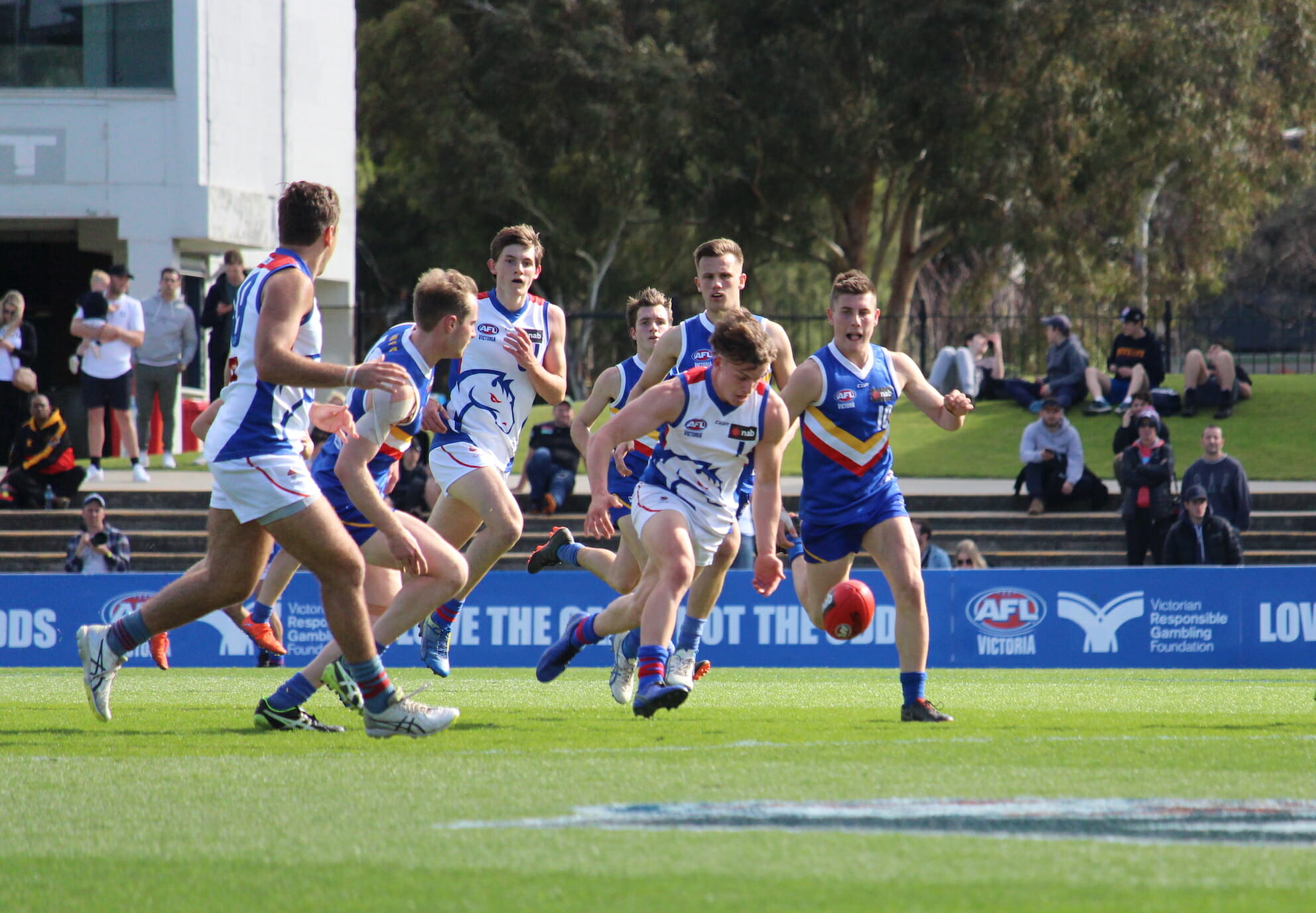 This kid’s journey to the big dance was a bit… testy. Lucas ‘Testy Westy’ Westwood, a late out in the preliminary final due to a ruptured testicle. Ouch, wasn’t going to stop him here though. 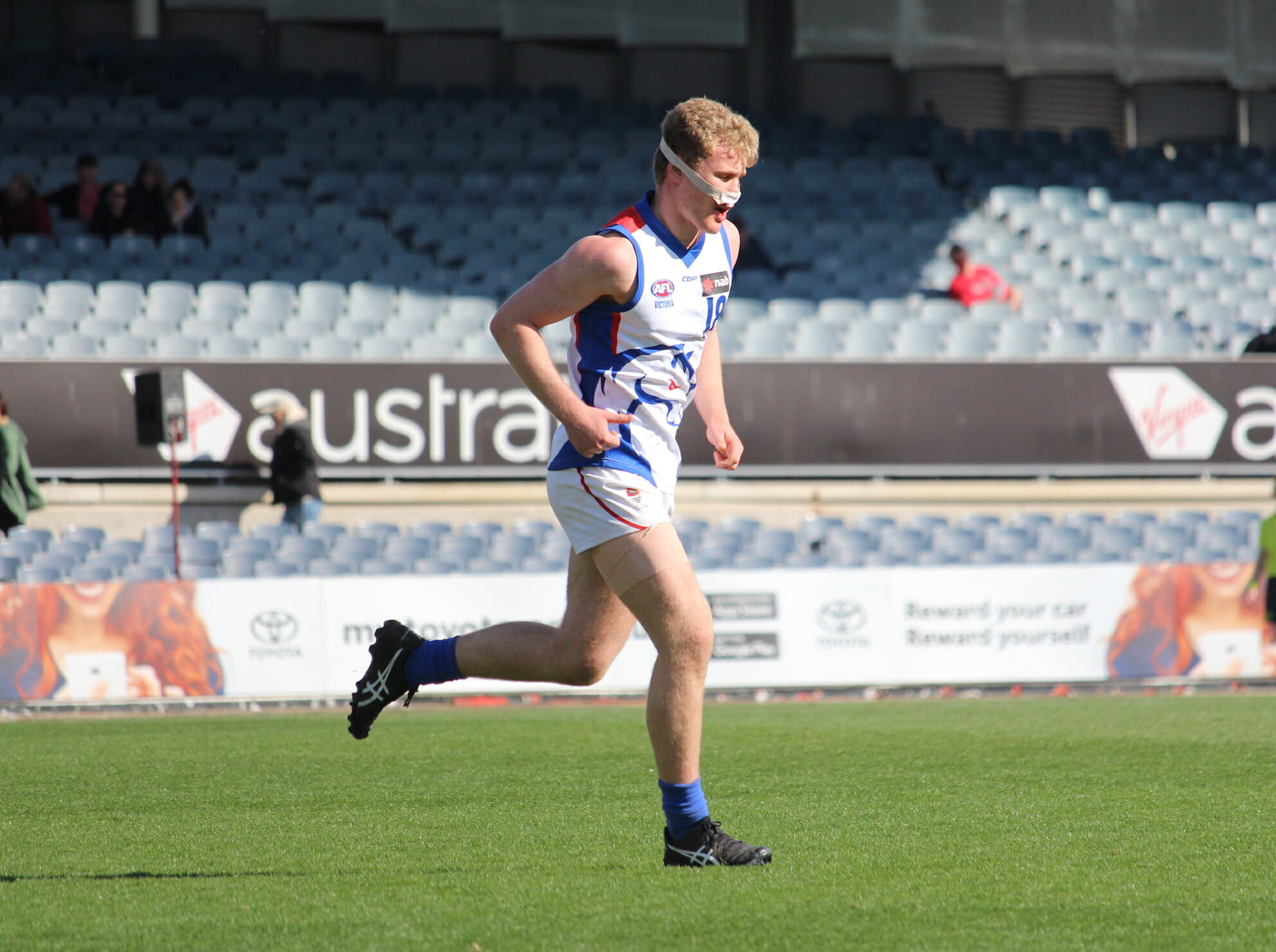 Bitta Selwood about this. Fraser Elliot wore the crimson mask and came out on top. 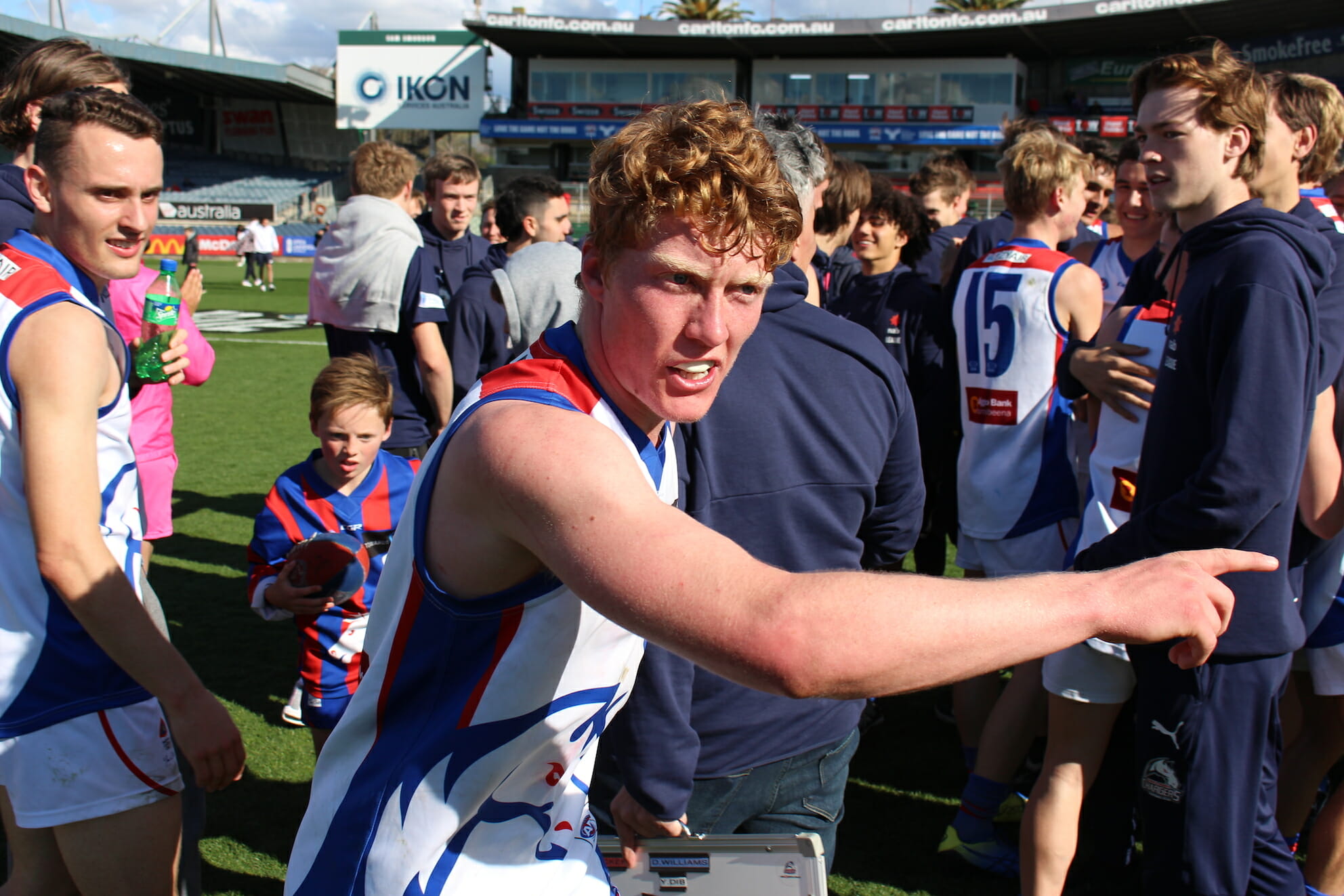 The best on ground an unprecedented second time. This is the moment Rowell asked “can I do the handshakes first?” when being dragged away for media duties. Shades of Xavier Duursma with TAC Cup Radio last year. 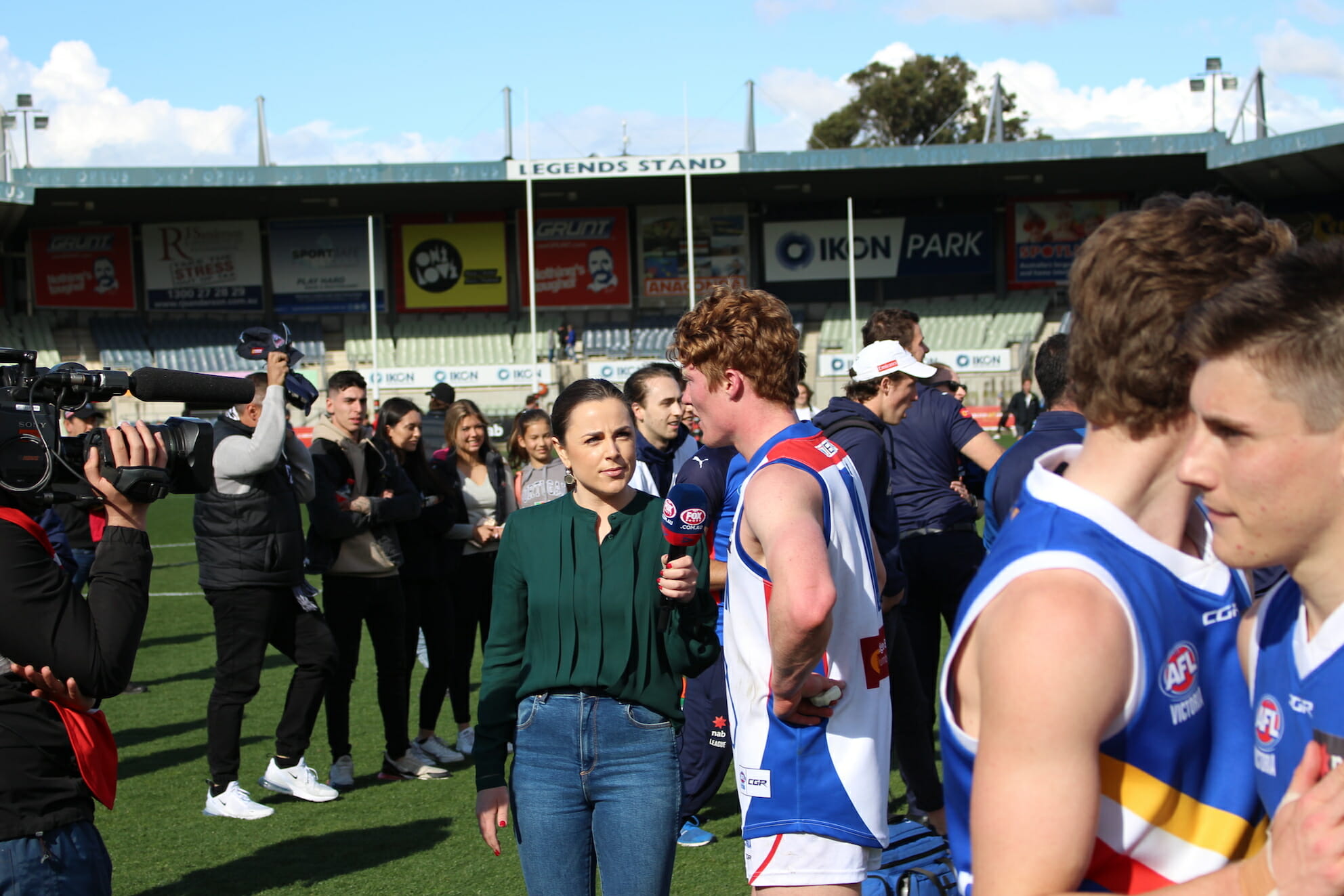 Yeah, get used to it young fella. 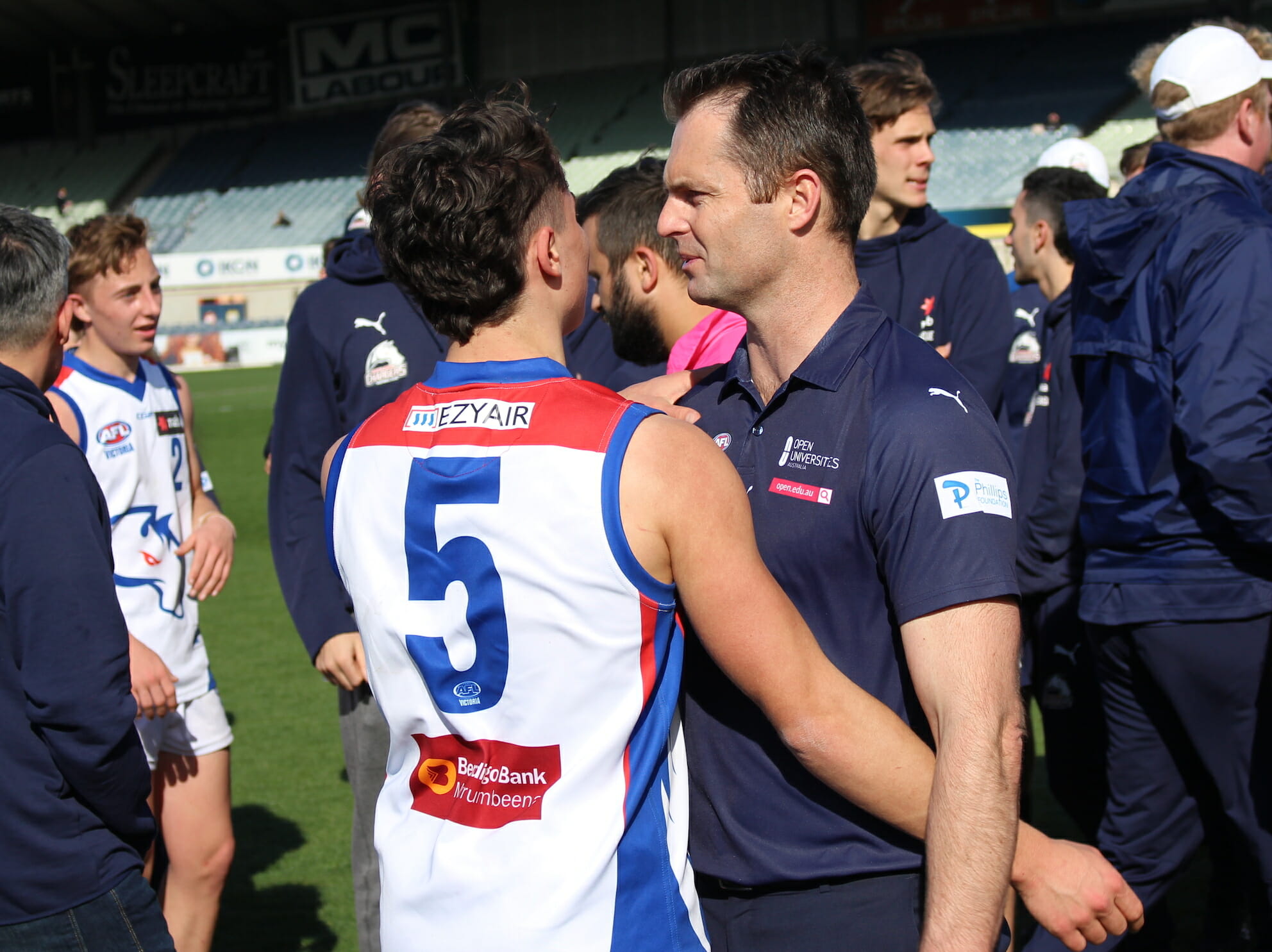 Captain and coach. They were happy, trust me. 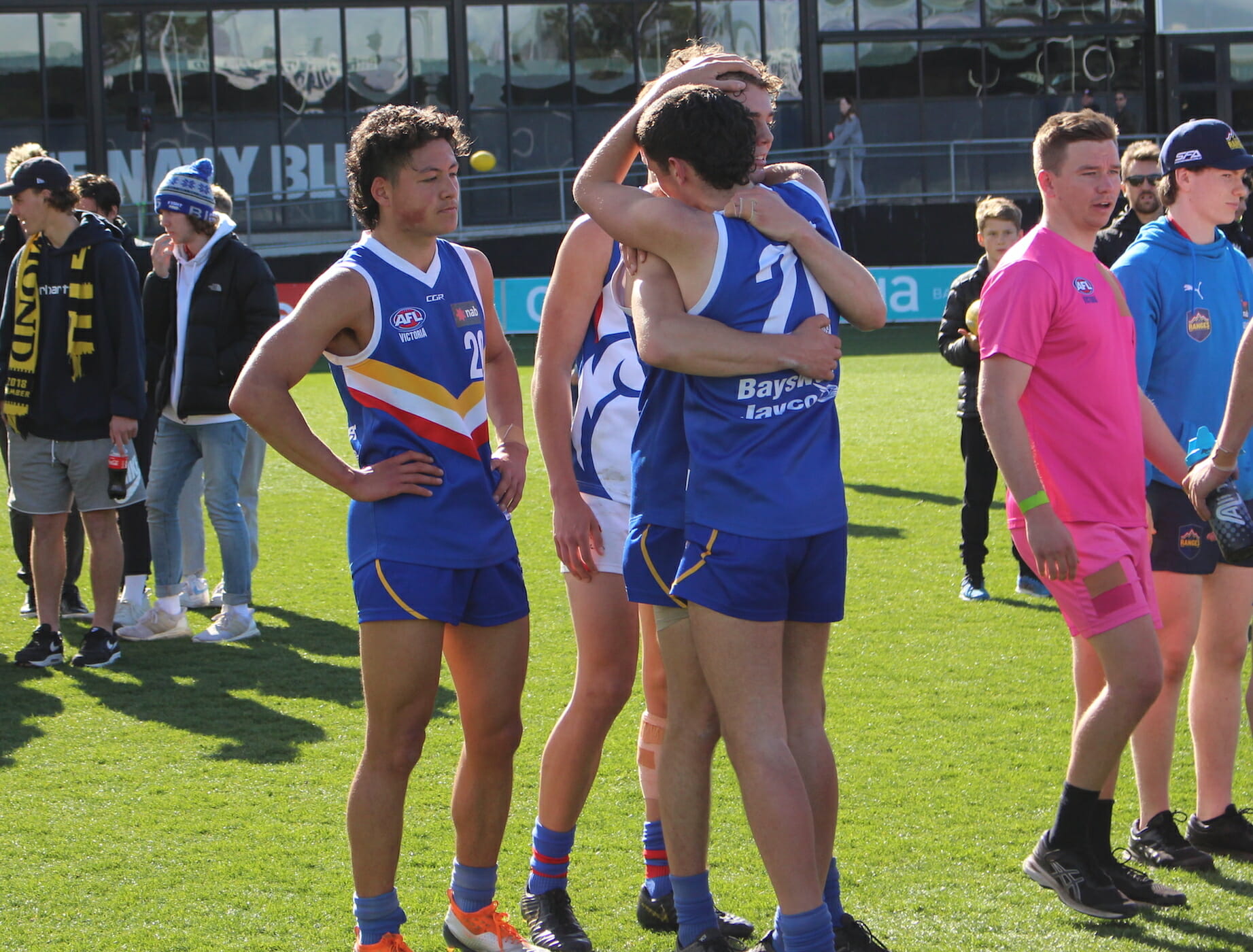 Often forgotten, the hurt. What a leader James Ross is, had an outstanding year, but unfortunately someone had to lose. 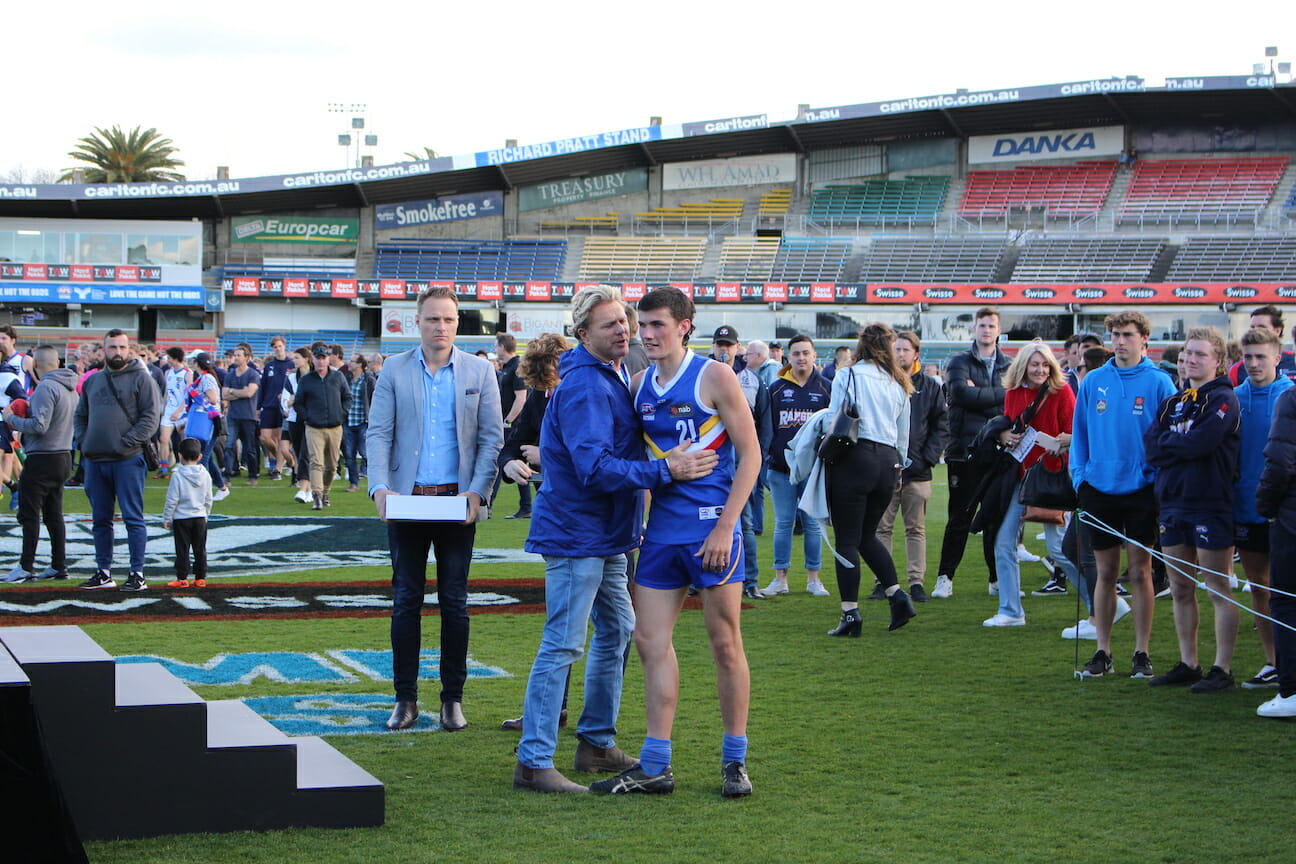 Dermie’s son Devlin played for the Ranges a couple of years ago, he offered some words to Ross post-match. 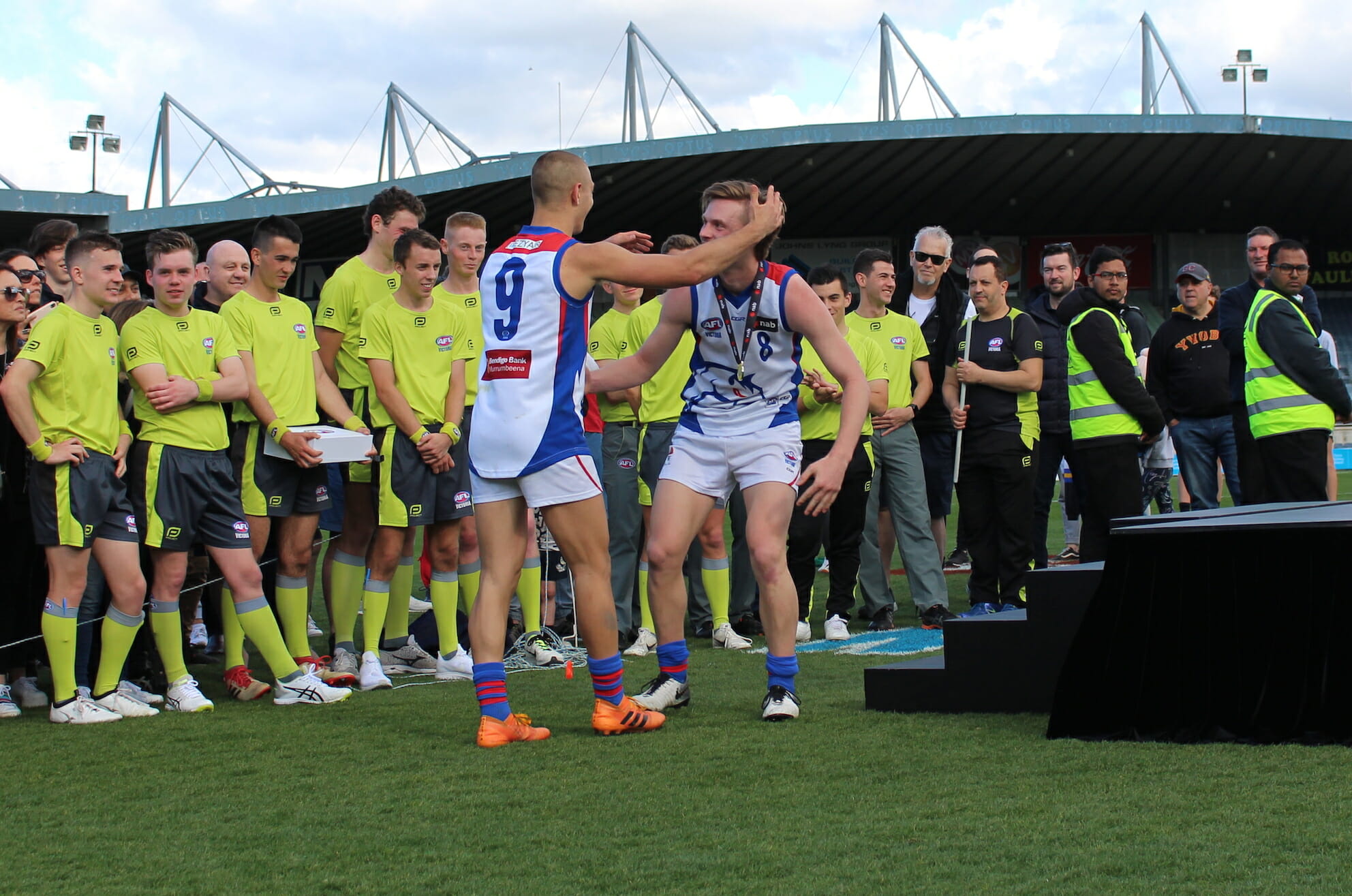 Moments after Anderson slipped down the podium stairs, probably one of the few mistakes he made on a football ground this year. 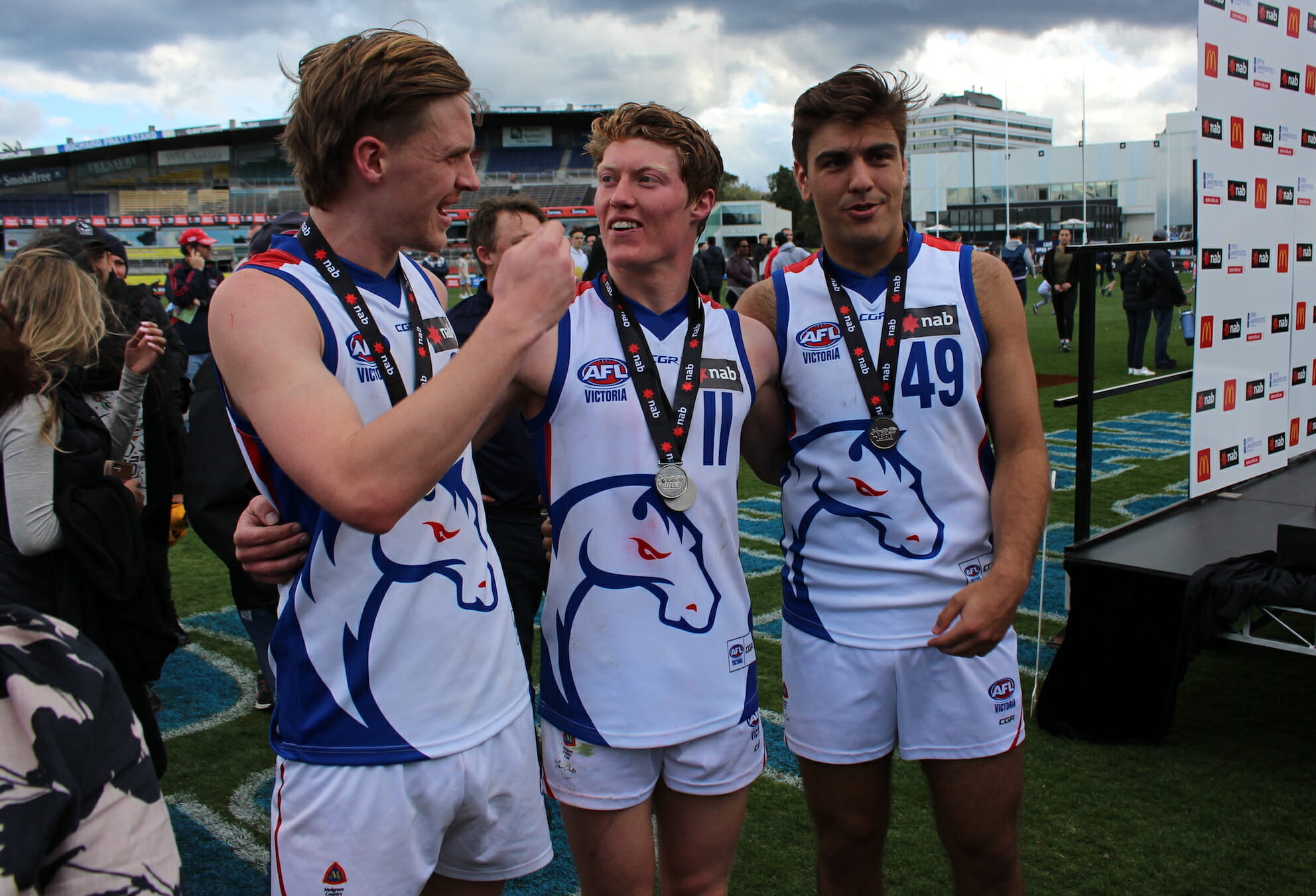 “The top three” according to Harris Mastras. 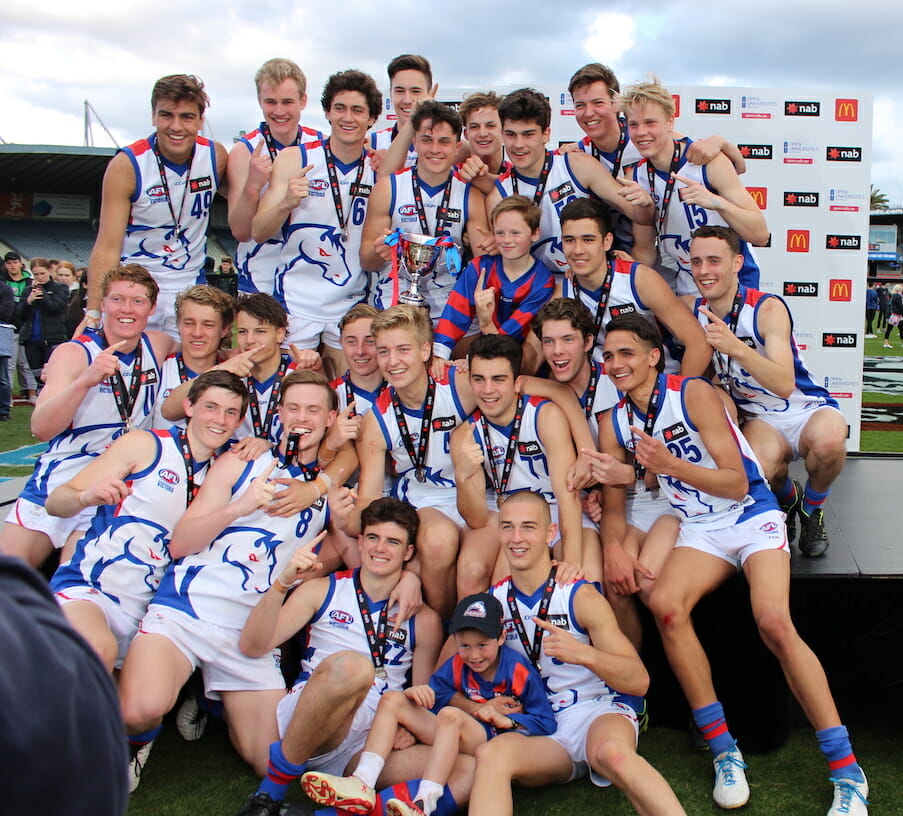