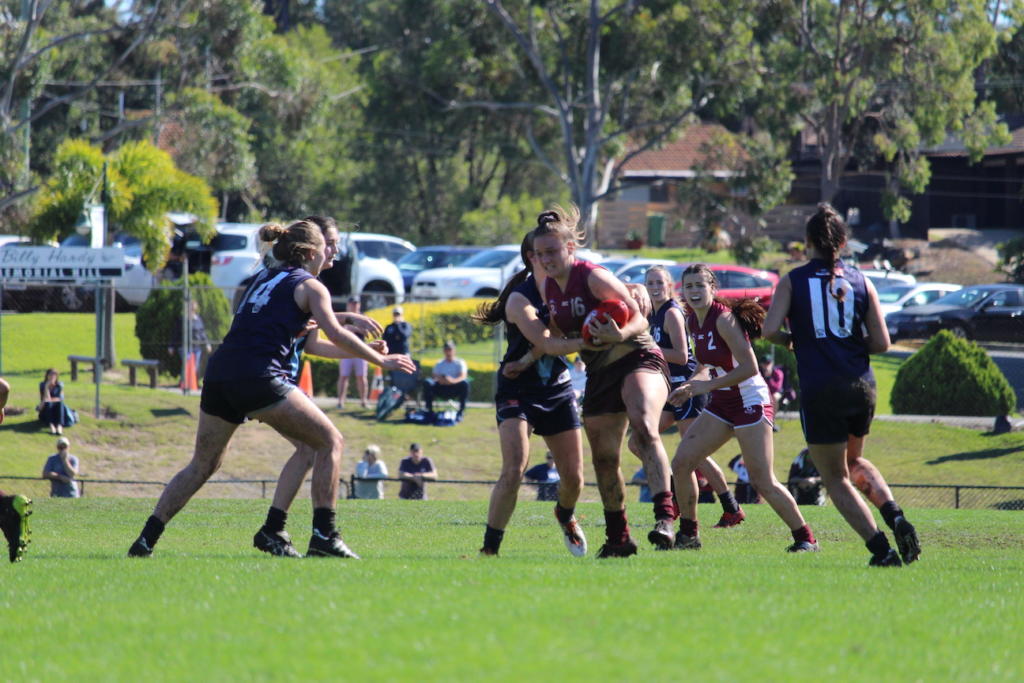 WHEN you are a pre-listed AFL Women’s player heading into the Under-18 Championships mid-year, there are a lot of eyes watching to see just what spectators can expect next year at the elite level. For Gold Coast SUNS’ signing Ellie Hampson, she not only ticked the boxes expected of her, but she went above and beyond, collecting the Queensland Most Valuable Player (MVP) award, as well as All-Australian honours and being the dominant inside midfielder at the carnival. It is hard to believe that such a performance could come from a player who, just a few years ago, was not even playing the sport.

“This year’s my third year of footy for club,” Hampson said. “I never really played too much footy, I was always a soccer player ever since I was five-years-old. “Then one of the directors in Queensland, Kath Newman who was up in Townsville at the time, really helped me with my footy career and introduced me and told me to come down and have a kick at one of the school comps and really just took off from there. “She got me into a Peninsula side, which isn’t actually my region but they needed players and that was where I first got selected in my first Queensland side and then just started playing footy from there. “Played for Queensland for the past two years; this will be my third and final year and I’m aiming to move down (to Gold Coast) at the end of the year as I’ve been listed as Gold Coast SUNS signing.”

Hampson said despite receiving the news that the SUNS were going to sign her for the 2020 AFL Women’s season, she refused to rest on her laurels, and instead put her head down to focus on her football as best she could. She admitted it was not feeling like a reality until she ran out in the red and gold next season.

“Yeah, I’d still think that it’s (AFLW future) not set,” Hampson said. “It honestly hasn’t… there’s times where I’ll be with my friends in Brisbane and they play for the Lions and they’ll be like ‘we’re just going to go to the Gabba to the gym, a gym session’ and I’ll be like ‘oh yeah okay’ and then I’m like I can’t actually go in the Gabba, like it’s a rival club, I can’t actually go in there. “So stuff like that is kind of like ‘wow this is real’ and then the next day I’ll be at Queensland training and I’ll be like ‘wow I still have a massive journey to get there’. “It definitely hasn’t set in and I don’t know how long till it will. “Hopefully first debut game and that’s when it will hopefully set in.”

Despite the SUNS being a new side in the competition next year, the Academies have been in place for some time and the banter between the new team on the block and the established Brisbane Lions, has already started.

“I have friends in both sides and there’s a lot of jokes and banter that goes on behind the scenes, but on the field we all take it very professional as with the Winter Series games,” Hampson said. “Play hard against each other and then best friends again after the game and that’s my favourite thing, there’s no bad blood between the teams, I just really enjoyed the experience before it’s even started.”

Hailing from Townsville, Hampson has had to make a lot of sacrifices for her football, and it has not been easy to get some continuity in her living arrangements either.

It has meant her schooling has also been a challenge, but something that Hampson has worked through thanks to the support of her family, school and football clubs.

“It’s been really difficult with school,” Hampson said. “But I have a really good support system. “Got my family, everyone at footy. “My school supports it a lot as well. “I’ve got through it. It’s school holidays now and I’ve just got to push through next term, I’ve got two terms to go.”

Her goal for the Under-18 Championships?

“I just want to play the best footy I can play and improve and help other people improve and just play for my team and really just make the best of the opportunity and get around the girls because this is the last one we have so I’ll really miss it,” Hampson said. “(I) just want to take it with both hands and go as hard as I can.”

It is fair to say she eclipsed the goal and now will focus on working on her game ahead of the AFL Women’s 2020 season. The humble midfielder finds it easier to talk about her areas of improvement rather than her strengths.

“I hate this question (of strengths). I think my ability to just push through and my strength,” Hampson said. “My love for the game and I have a very strong competitiveness so that often pushes me through.

“I have a lot to improve on,” she said. “I just can’t wait to clean my hands up and get my handballs out quicker and hit my kicks. “I’ve got so much to improve and I’m just so excited to see how far I can go.”

As for her idol in sport, it comes from another cross-coder who dealt with challenges along the way.

“I’ve had so many actually,” Hampson said. “But my main one who’s always been an inspiration would have to be Ellyse Perry. “When I was 12 she was my idol just between the two sports, coming through and having a lot between all the clubs and there’s a lot of controversy that went on in the background, and pushing through it and coming out on the other end. Now she’s living a great life.”